Hey guys, I’m using the kindle fire 8 hd with fully browser for my sharptools dashboard. Love sharptools guys. Anyway, I’m curious if I can get a camera tile for my ring doorbell that populated with the live footage from a ring motion event. I’m using SmartThings and have the ring doorbell added in there. I have downloaded the ring app from the play store as well. If I could get a 4x4 tile for ring that, when motion is detected, expanded to full screen with the video feed until the motion ends, then return back to dashboard. Or just show the motion in the 4x4 tile. Is any of this possible?

I’m using SmartThings and have the ring doorbell added in there.

Unfortunately, the SmartThings integration only exposes some of the attributes of the device (like motion), but not the video feed.

And since Ring doesn’t have an open API, there isn’t an official way of embedding the video stream directly into your dashboard. That being said, some people use an alternative approach with AutomateIt (or Tasker) to automatically bring up the Ring app when motion is detected.

From what I understand, it’s two rules that get setup in AutomateIt:

Another approach that we’ve seen used when you only want a doorbell stream to show up when the doorbell is pressed is documented in the following post:

How To View Ring Doorbell When It's Rung? SharpTools.io (web)

I’ve seen people doing this on Amazon Fire Tablets and Android Tablets. From what I understand, the basic concept is to use an automation app like AutomateIt (Fire OS) or Tasker (Android) to detect whenever a specific notification is received on the Ring App… then when that notification is received, automate clicking on the notification or opening the app. Note: If I remember correctly, some people mentioned that the Ring app previously would launch the video stream right away when you opened…

It uses a doorbell sensor to detect the button press and uses that event to open the app.

Thanks Josh! I will give both of these a try and see what works best. Really appreciate the detailed answers!

What settings would you have to have in Fully Kiosk browser to allow the Automateit app to open?

As long as the Kiosk Mode features which prevent other apps from opening are not enabled, AutomateIt should be able to launch other apps in the background.

@josh do you have a more detailed setup on AutomateIT for Fire HD 8 (10th gen). I am trying to set it up to open ring when the doorbell is pressed AND when motion occurs on the camera. And then have it close after 1 minute and go back to my dashboard.

@Denver, just to throw another option without having to use AutomateIT. You can also use Rule Engine and create a Fully Browser device using the Fully Kiosk Browser Device Handler to open the Ring app when the Ring button is pushed. I personally would suggest not to include the “AND motion is active” in the condition, but would be the rule example for what you described. (If you want the same behavior when the Ring button is pushed OR motion occurs, you can remove the IF_Condition, and add the Ring motion status changes to “active” in the Trigger section.)

EDIT: update the rule example to trigger the rule when either Ring button is pushed or motion is active, and update the command to bring Fully browser to front 1 minute after. 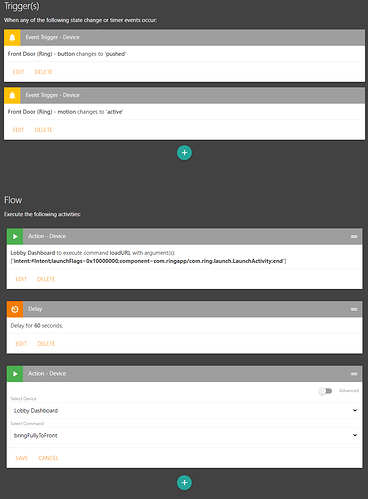 James - in your example, are you waiting 60 seconds before displaying the camera?

I’d like to do it the way you show it but am having issues with this part and the link. " Fully Browser device using the Fully Kiosk Browser Device Handler" do you have a simple step by step guide for what I am trying to do and I like your idea about the OR function in lieu of AND? I have no clue how to download that DTH like you talk about in the other link. I was although able to create the device handler in smartthings for fully kiosk. Also when I add it to smarthings devices it works but when I go to manage devices and add it in fully kiosk and sharptools dashboard I get this " Oops! Uh oh! We couldn’t complete the authorization. Try again."

I think SmartThings is having server issues at the moment. I was able to reproduce and I also tried authorizing SmartThings to IFTTT and Logitech Harmony it’s not working on those either.

James - in your example, are you waiting 60 seconds before displaying the camera?

The delay is after opening Ring app as the @Denver’s request is to show the Ring app for 1 minute and then close it ( return to the dashboard).

I was although able to create the device handler in smartthings for fully kiosk.

Here are the detailed steps:

Please note that I updated the rule example I post earlier. Realized the command loadStartURL doesn’t bring the Fully app to front, and have to specifically use bringFullytoFront command, and I changed the trigger logic as I suggested.