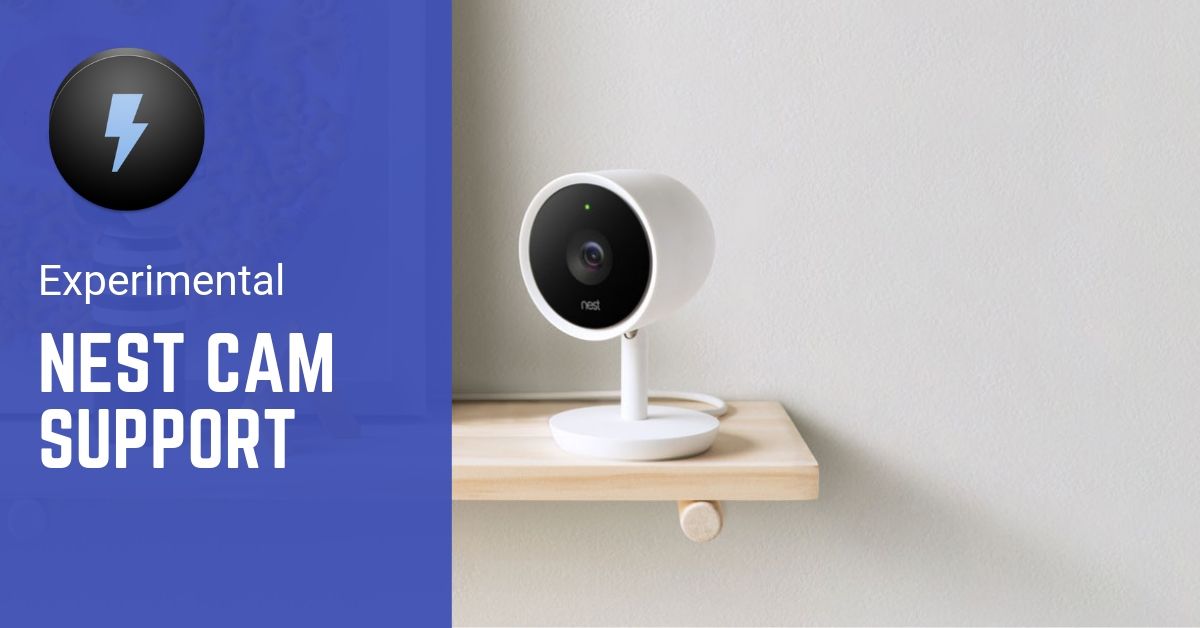 In order for this feature to work, you’ll need to share your camera publicly. Once you’ve enabled the Share Publicly option for your Nest Cam, you can copy the link and use it in a SharpTools Media Tile: 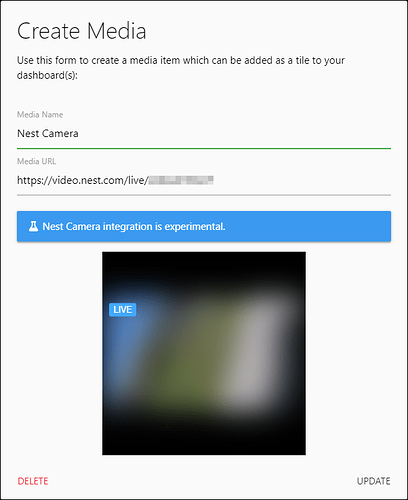 Also included in this release are a few bug fixes and enhancements:

I know that Nest Camera integration is still experimental but I see the spinning circle a lot on my Android Tablet running Fully Kiosk however I don’t get it on a quite old iPad Air 2 that I use sometimes. The iPad has 2gb of Ram and the Android Tablet only has 1GB, is that likely the culprit? Even if I only have 1 nest cam added, I still get spinning every couple of seconds.

If it’s a spinning indicator coming directly from Nest, then it could be a network constraint or resource constraint on the tablet.

Yeah it seems to only happen on the tablet. I’m thinking likely the small amount of RAM. Is there anyway to build in the ability to reduce the video feed size/resolution so older tablets could run a lower res video feed?

Not that I’m aware of on the Nest public feed. I would try ruling out the network connection being an issue. Try moving the tablet closer to your router just for testing. You might also try switching between the tablet 2.4 GHz and 5 GHz networks.

Interesting revelation: when I click on the tile to open the camera full screen, it plays smoothly with no spinning circle at all!

That is odd indeed as the Nest cam tile and the fullscreen view are both loading the same embedded stream page.

That being said, you’re right that the tablet might be resource constrained. It looked like the tablet was quite slow to close the fullscreen popup.

If the stream within the tile only periodically gets the spinner (eg. every few hours), you could try adding an Autorefresh interval to the Media resource. 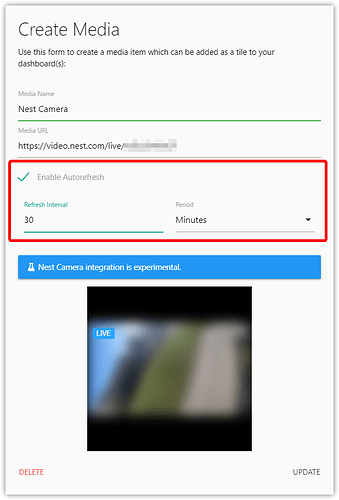 Unfortunately the tile spins every minute or so. So I don’t think that refresh will work. Darn!

Is there a way to use the password stream? Or are they working on this?

Hate to leave my stream open to the internet.

Is there a way to use the password stream? Or are they working on this?

We’ll have to wait and see what Google does. Details have been somewhat limited ever since they announced the deprecation of the Works with Nest program (and related APIs) and the move to integrate into Google Assistant.

I believe some people have used third party tools like Blue Iris or TinyCam to convert the stream from their Nest cameras into a format that can be displayed on a dashboard, but I haven’t personally tried it. From a quick search, it’s unclear if that approach requires a Nest account as it looks like some of the posts in the TinyCam and Blue Iris forums are complaining that things quit working once they converted their accounts to Google Accounts.

Thanks for the reply. I will be watching to see what happens…

Hi there. I notice I have about a 10s+ lag. Is that a limitation from a public feed or is that Sharptools? Just wondering as I was all excited to add this to my doorbell cam but it’s just too long to be useful. I’m hoping it’s something I can do to improve.
Thanks for all the good work.
Alan

Hi @Alan_Bucke - welcome to the community and thanks for posting.

The stream is going straight from Nest to your browser, so it may be a limitation of your public stream. That being said, I haven’t seen other people mention such long delays.

If you open the public stream directly in your browser (on the same device that you are viewing your dashboards from), you should see the same thing. You could also try opening the public stream on a different device to see if the viewing device is also contributing to the delay.

And it’s also possible that all this COVID-19 stuff is contributing to things. Google has been lowering the bandwidth usage across all their services (including YouTube and Nest), though I would have thought that would have contributed to a lower bitrate (quality) rather than a delay.

Thanks @josh. I just wanted to confirm that you are correct. The lag is on the public feed and not Sharptools.
Last count was 18s lag between private and public. Fine for general recordings but not for a doorbell. I will take it up with Nest as this is still something I would love to show on my dashboard.
Thanks
Alan

Any updates on the password stream recently? The public stream still works but really don’t want to include any cameras with people areas without some level of authentication.

@Barry_Martin there is no recent update to this Nest cam experimental support. Thanks.

You could try TinyCam. Last I tried it the streams were like 1fps through TinyCam though. I loved the simplicity of the Nest cams and the app, but integration with other stuff sucked.

Thanks Chris. I will take a look at it.

Hi My friend, are you running Nest Cam in Sharptools yet ?..Im looking to go away from Wyze Cam and TinyCam Pro…its a pain with constantly crashes. Im looking for a friend that can guide me to try Nest Cams and its share feed feature…Thanks in advance !