Josh, I Need a Sherpa

So I did a quick look and didn’t see anything that would scratch my next itch, not maybe you have some this already.

As you know, I often ask people to just “do it for me, same it look cool” in jest, but there is a small bit of truth in there. I know this may only be me, but if you can reach just one person, right?! Some of us, such as myself, are not gifted with what you may call a propensity for esthetics, organization, or plainly, where we even start to give ourselves even the slightest chance of making a dashboard look cool. I’ve tried, but end up being distracted for one reason or a another, and I bought an Amazon 10 specifically to act as a wall mounted, mobile dashboard which will be cool enough to make me look really cool to other people, which is VERY important to me.

Have you guys ever put together a comprehensive (or even basic) process checklist or recommended order and method of designing a set of dashboards that could be followed by us simple folk? I know, I’m getting kinda close to that “do it for me” line, but I think it would help get some folks going in the right direction whilst avoiding process doctrine familiar to you but not-so-much to us. And by “some folks”, I of course mean probably just me.

There’s a few different approaches to designing a dashboard, so you might start by thinking about what you are trying to accomplish. I see two dichotomous visual approaches to dashboards frequently being used:

Alternatively, it might help to think about how you are trying to use the dashboard.

For example, take a look at this dashboard approach, which has some key information available on it (like weather and time), but you have to tap on one of the tiles along the bottom of the screen to drill in to view more details or control things:

Compare that with the following approach which has a variety of devices, weather, time, and navigational elements on it. From a functional perspective, everything is right at the users fingertips and they can see the status of a variety of things at once. From a visual perspective, this has a lot of things happening on it all at once which might be overwhelming for some. 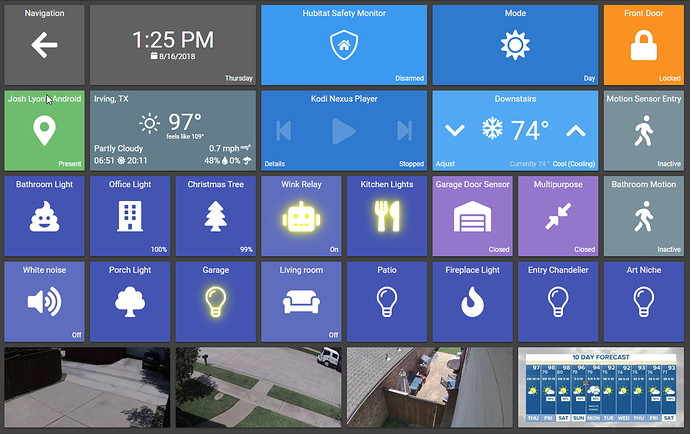 There are some approaches to striking a bit more of a balance though. Take the following which is a bit of a variation from the previous setup. The difference being that color was stripped from the tiles using Dashboard Settings and tiles only light up if they are active. Specifically, security related tiles are customized to show orange if they are insecure (eg. unlocked/open). Again, this still might not be quite as visually appealing as the first option, but it provides a bit more information about the status of the home at a glance. 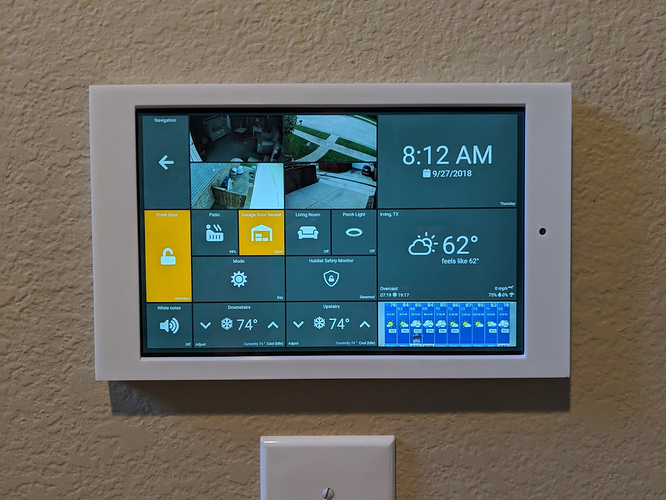 You’ll find more examples users have posted in the Share your cool SharpTools project! thread, so I encourage you to check that out as well!

(And perhaps it’s time I create a new “Show off your Dashboards” thread!)

I have taken a look, and really prefer the first to the second. In my mind eye, I would had a number of seperate dashboards that are accessed through an intuitive flow, which is where I get stuck. I know how to put the tools where they go, it’s the planning part, the flow of the interconnections. It’s there a template or defined process for getting from nothing to something? If not, I shall press ahead and try and make one, or what could be one once the magic of creativity is applied!

I guess that’s one of the cool things about dashboards - there isn’t a single ‘right’ way to build a dashboard.

It sounds like you’re a step ahead with putting together a clear plan for your dashboards. The first step is having an idea of what you’re trying to accomplish and it sounds like you know the style that you’re looking for. If you have a good feel for the various tiles, the next step might be to sketch out what you are looking for. Either by literally sketching on paper, putting together draft dashboards, or even just writing down some thoughts on what you want to build.

I definitely plan on doing some more YouTube videos. I’ll probably do more videos on how to use specific dashboard features or build specific types of dashboards. The ‘art’ of building a dashboard might be outside the scope of the initial videos but I’ll keep it in mind as something to revisit later!

OK, I beat some middle school kid and stole his Adderall, so this is HAPPENING!!!

(Editor’s Comment: It should be noted that any attempts by the author to fight anyone would end quickly with the author running away. Further, he is afflicted with the debilitating cognitive condition called “Gingervitus”, formerly known as “That Annoying Redhead”, and thus is prohibited by law in all nations from taking any stimulants, because, put simply, you don’t put out a house fire with pressurized gasoline. Gingervitus only looks like ADHD, normal pharmaceutical treatments only amplify the ginger.)

Sorry, it’s been awhile since I’ve posted, and I figured you guys missed my nonsensical books!

I do have a real question, which yes, I know, should have been up top, and shouldn’t be buried way down below all the silliness, I know. But it’s too late now, it’s already there, and they told me once it’s on the World Wide Webs, it’s there forever. Can’t do anything about it now, can we!?

So I’m building…crafting…no, sculpting my Sharptools Dashboard on the totes-begotes tablet you said I should buy if I ever wanted friends. I do want friends, more than anything, so I purchased it from the Amazons, and have named the machine “My 10” Fire". In a move to garner more of your praise, I trusted your recommendation and have been building the aforementioned dashboard in the very snazzy and made for cooler people, Kiosk Browser. As I’m sure you probably expected, I have lost all capabilities to configure the Kiosk Browser because there are no longer buttons. I don’t understand why they are gone or where they went. My two go-to troubleshooting methods normally used to elicit computer/ smartphone behavior modification and compliance, high volume voice commands and sharp high pressure kinetic inputs, were, as they always are, ineffective at solving the issue.

Should I not be using that weird buttonless Kiosk Browser thing to build my Cool-o-Magical dashboard, and only use that once my Highly-Sought-After dashboard that everyone will copy and make wish they were my friend, is all finished and ready to go?

I ask because right now whenever I put something (I believe they are referred to colloquially as “tiles” or “cool magical shiny squares”) where I want them to go, even go that extra-mile and provide multiple verbal commands and threats of punishment to the Kiosk and My 10" Fire not to move the tiles because I put them there for a reason, if I change a tile setting to make it go from kinda-bad to wicked-rad, when I save the improvement and the dialogue box closes, My 10" Fire laughs at me and does what that mean kid in High School always did whenever i would be peacefully enjoying a jigsaw puzzle in the library. Mean Margaret would always upend all my meticulous awesome sauce work and throw my beautiful puzzle of a wolf howling at the moon straight at my head and the wall. But in this case all my tiles go wherever Lady-Luck decides to take them, the tiles scatter into the shapes of a middle finger and a devious smiling face, chaos ensues, and I end up losing hours of time to the inevitable fits, crying, self deprecation, and watching The Notebook movie whilst eating ice cream out of the tub cause if makes me feel better. It’s probably pretty tough to watch.

Is there a way to turn off this “Auto Rage Inducer” feature? I know that there is probably a very good reason that people want that to happen, but Josh, I don’t have to tell you cause you already know. This Fly Guy ain’t like other people. My mom says I’m special, and that I’m gonna be a “catch” some day…Someday… I’m 47 now, and she said I’m just getting unto my prime now!

Thanks mom, now get out of my room!! I’m talking to my best friend Josh, quit bothering me! Jeez!!!

I have lost all capabilities to configure the Kiosk Browser because there are no longer buttons.

Should I not be using that weird buttonless Kiosk Browser thing to build my Cool-o-Magical dashboard, and only use that once my Highly-Sought-After dashboard that everyone will copy and make wish they were my friend, is all finished and ready to go?

My recommendation would be to design the dashboard on the device that is most comfortable to you. Typically, most people like to develop their dashboards on a computer as it’s easier to create their different resources (media, hyperlinks, etc), drag-and-drop tiles, etc.

What’s cool is if you already have your Fire HD opened with your desired dashboard loaded, then as you make changes on your computer and press the orange save icon, those changes will immediately be pushed to your tablet and displayed immediately.

The following post has some tips on designing from a computer - specifically how you can use the Chrome Developer Tools to mimic a specific screen size:

There’s two common approaches that are used: Keep the phone or tablet nearby with the dashboard open as you make edits on your laptop As you make changes to a dashboard on your laptop, those changes will be instantly pushed to your phone/tablet when you press save on your laptop Use the Device Toolbar in Chrome Developer Tools to simulate a device size In Chrome on a laptop/desktop, press F12 to open Chrome Developer Tools Select the [image] icon in the toolbar to enable the device toolb…

There isn’t a way to turn off the layout reflow, but it shouldn’t completely rearrange your tiles when you press save. As you move tiles around, the system will automatically try to push existing tiles down to maintain their horizontal position. And if there are any gaps left when you save a dashboard it will automatically close those gaps (shifting tiles so they flow left-to-right, top-to-bottom), so using a Blank Spacer Tile from the Other category: