How to switch from Android/Fire to Apple / iOS / iPad Pro?

Long time no talk. Am still loving SharpTools and my Kiosk and my very automated house. Android and FireHD10? Not so much. Very fiddly and way too slow. I’m ready to pitch those in favor of an iPad.

My daily carry for a tablet (around the house) is 10” iPad Pro. I can live without it (in favor of just using my iPhone or maybe getting a new iPad mini soon) and so have spent ~$20 at Amazon on a Dockem Koala wall mount and USB-C charger cable (the one I had for the Android didn’t go far enough into the iPad).

What I need now is some sort of replacement for Fully Kiosk. Or some tutorial/101/FAQ on how to make the set-up more kiosk-y. I liked how the Fire table/Fully Kiosk would turn on automatically and already be on (other than first thing in the morning when I had to wake it up and reset the brightness to full from it’s lowest setting).

Any pointers? Anyone already ask this and any entries in this community I should read to know what to do next? 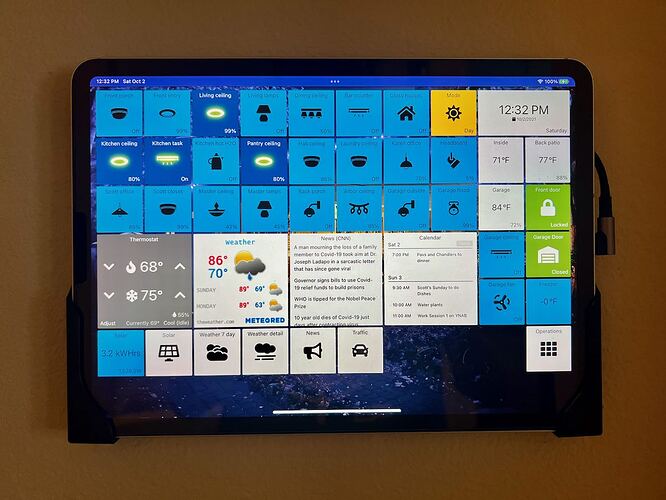 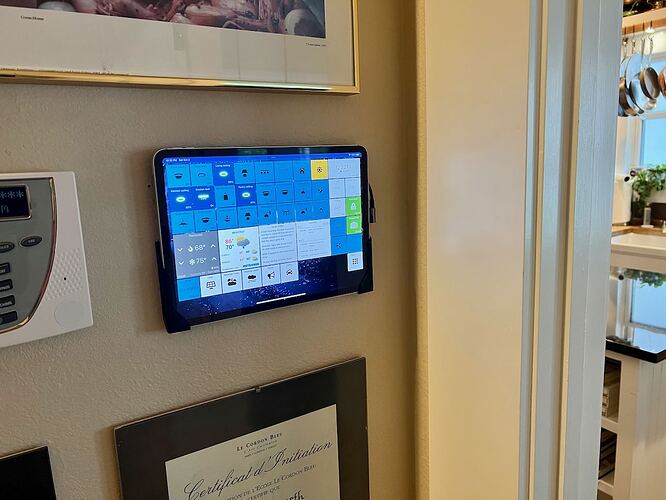 Hi @Scott_Farnsworth - good to hear from you and I’m glad to hear that you’ve been enjoying things!

Unfortunately, I don’t think there’s anything quite like Fully Kiosk Browser in terms of the depth of integrations and functionality that it has. That being said, there are a few ‘kiosk’ apps for iOS and even some alternative approaches.

I haven’t personally tried these, so I don’t have any specific recommendations. If you end up trying them out, it would be awesome if you could share your feedback here so others can learn from it!

I’m going from memory here, so forgive me if the details aren’t 100% spot-on, but the general approach is to use the Add to Homescreen approach to pin your dashboard to your homescreen. Make sure your iPad has Guided Access enabled, then open your pinned dashboard and triple-tap the home button to enter guided access mode. Then you can create a notification (either in HomeKit or something like Pushover to your iPad) whenever a motion sensor connected to your smart home hub is activated – the notification hitting your iPad should wake it to your guided access pinned app.

Thanks! Good stuff. I will check these out. I’ve read other stuff about Guided Access, so I’ll dig into that some more. I haven’t heard of Kiosker. Sounds promising. Will definitely try that. I’ll report back what I find.

Thinking about making this switch as well. Did you ever settle on a good kiosk browser?

Tagging @ACASS_Canada_Ltd and @Robert_Lynch as they were looking at iOS kiosk browsers as well:

Hello friends! Question for ya’. In iOS 15, it appears that the banner at the top of any dashboard remains visible in SharpTools Blue even when running in full screen mode. Is there a way to eliminate this, or have it styled in black so it “disappears” into the iPhone notch? Warmly, r. [IMG_2118.PNG]

Hey Sharptools family,
Sorry I haven’t written. I promised I would. I promised I’d give my thoughts on using Kiosker and an iPad as my kiosk for my home/garage Sharptools set up. I’m late in so doing, but here it is.

Am I glad I did it? Absolutely. The iPad is so much faster than the FireHD 10. The iPad (and iOS) are so much more stable and reliable than the FireHD. The layout I have for my tablet and laptop access to Sharptools seems to be more consistent, aspect ratio-wise, than the fire. I love that I can go from the Sharptools listing of my actions for the day (my calendar) and click on an action, and edit it or delete it, using the iOS interface I’m used to for the calendar (or news or weather) rather than the FireOS equivalent UI.

The FireHD always seemed to be ‘needing something’. Some update or some ‘re-change the settings’. Every morning when I came in the FireHD would recognize that I was there, but the brightness had been turned down to the minimum setting. I had to manually turn it back up to what I preferred. That was really hard. Why? Because the brightness was down at the lowest setting. The brightness and clarity (resolution) of the iPad (albeit a 10” iPad Pro) is much better than the FireHD.

Granted it was much more expensive than the FireHD, but people frequently upgrade their hardware and as such it’s possible to end up with a tablet you can use, just because it is no longer being used for something else.

How do I use Kiosker and what do I think of it? It seems very reliable and easy to set up. I used the free trial and then paid the one time fee for it (programmers have to eat, too). I use it just for a few things. I have it set to go into screen saver mode after 15 minutes (the longest delay you can pick). When that happens the iPad is now a really big digital clock.

When I want to wake up the kiosk/dashboard that’s the one big downside for me. The ‘wake up’ function is based on your height. Say what??? Well, not exactly, but given how Kiosker programmed it (maybe the only option that iOS gives them) that’s how it turns out. I’m 6’ and my wife is like 5’ 2”. Kiosk and the iPad use facial recognition to ‘wake up’.

I gather it’s not MY face, or my wife’s face (although I might be able to ask Kiosker to make it so), but rather it’s ‘A face’. This means the orientation of the iPad, and the placement of my face (or my wife’s face), need to be within a certain angle. Perpendicular to the iPad, it’s all good. Too far off 90 degrees perpendicular, and it doesn’t wake up. What does this mean? It means to wake it up either I have to crouch down a bit, or (if I optimized the placement of the iPad on the wall and the angle it is relative to the wall) my wife would have to stand on tippy-toes. Is this the end of the world? No. Is it a first world problem? Yes. Is there’s (conceptually) an easier solution that doesn’t have this problem? Absolutely… ‘wake on motion’.

The other “big thing” I use Kiosker for is to automatically go back to the main dashboard after some amount of time if I, or anyone, leaves Sharptools on some dashboard other than the home/main dashboard. I do like this feature. If I switch to the ‘show me the status of the batteries, or temperature, or motion states’ dashboard, I’m not forced to remember to ‘put it back the way I found it’. I can walk away and when I come back in an hour it’s not still showing me that ‘deep cut’ from Sharptools. Ditto going to the weather dashboard or news or …

Bottom line I’m happy. I’m glad I did it. I wish I’d done it sooner. I’d recommend it as a solution.

EDIT:
Whoops, meant to add a couple of pictures… 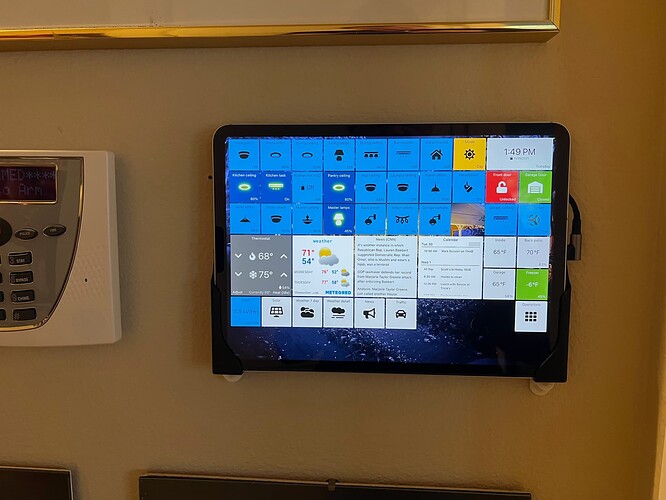 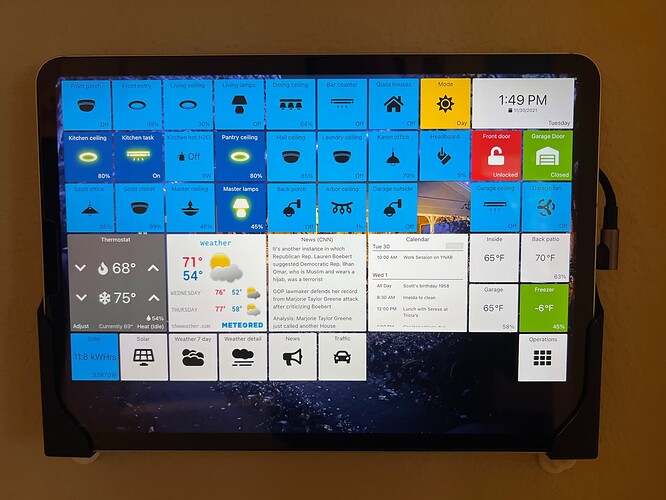 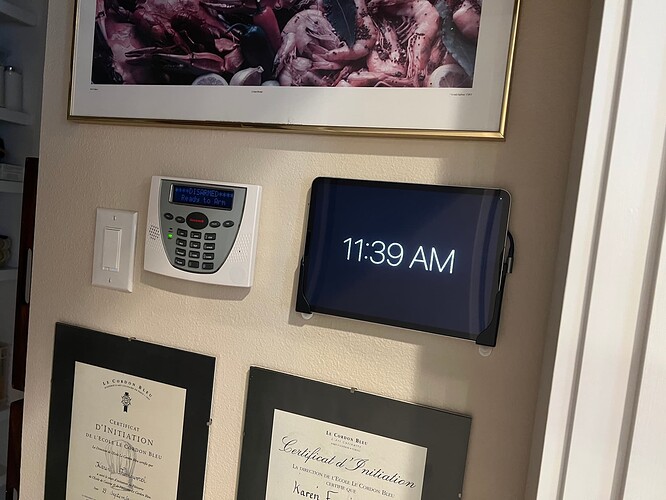 Hm, don’t know of a way, however given the colors of my background, and [most of my] active/inactive tiles, the color around the notch seems to blend well, IMHO. Not sure black would be better. But that may just be my situation. I’m using the Kiosker on my iPad, but not on my iPhone, so not sure that would change things. 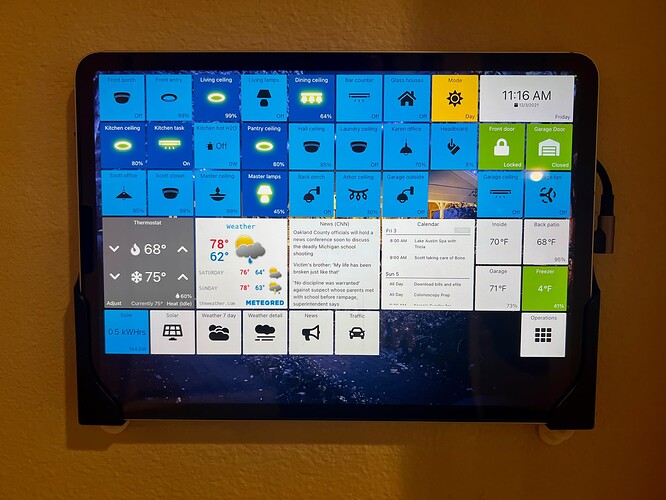 Bottom line I’m happy. I’m glad I did it. I wish I’d done it sooner. I’d recommend it as a solution.

Thanks for sharing your experience in detail! Great writeup that I’m sure others will benefit from as they consider the move to iOS / iPads!