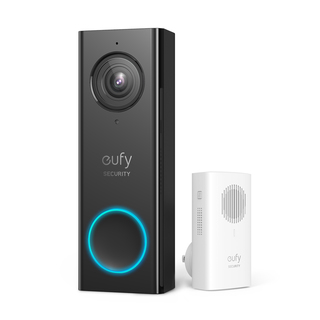 Thanks for posting Nick.

I briefly looked at this doorbell when it first came out and if I remember correctly, it does not have RTSP support like some of the other Eufy cameras and the video feed must be viewed within their app.

If that’s still the case, then really it’s more of a question for Eufy and I would recommend reaching out to Eufy support and ask them for RTSP support or stream that’s compatible with a web browser (eg. MJPEG or WebRTC).

If Eufy is unwilling to provide a video stream outside of their app, then one alternative is to use a Hyperlink Tile on your dashboard to open their app to view the stream.

How can I link to other Android or iOS apps from the SharpTools.io Web...

In order to use a hyperlink tile to open another application from the SharpTools.io web dashboard, you'll first need to create a Hyperlink using the 'Manage Hyperlinks' feature found in the SharpTools.io user menu. For more information on how to do...

If their app shows a notification on your tablet when there is motion, you might even be able to use an approach similar to what people are using with Ring where you use a third-party app like AutomateIt to simulate tapping the notification to automatically open the doorbell feed… then have AutomateIt reopen your dashboard after a few moments of inactivity.

I have a Eufy Doorbell as well. My solution has been to have it paired via Alexa on the fire I am running SharpTools on. I just say amazon show me the doorbell and it pops up. I don’t know if this helps or not but it’s my work around for now.

I too have set mine up this way…when you swipe to exit out of the eufy live feed does it goes back to the fire dashboard or the fully kiosk one??

I have same too
I couldn’t recall but just went to try on my Hall Fire - the first time it brought up the screen, then I just used the ‘switch apps’ action button on bottom toolbar, close the Eufy and re-select to bring Fully back to the Front.
I was going to repeat to see what ‘back’ did, however for the next 4 times in a row, it would not open the Eufy screen and instead I could hear one of my Echo Dots tell me it does not work on that device (well, duhhh!)
Which actually raises another question - how to disable the Dots from even responding to that request?
I was actually standing right in front of the Fire 8, the first time (well actually the second) the next closest Dot in an adjacent bedroom responded; so I closed that door and tried again - this time the Dot in the Master Bedroom (which is upstairs!) responded.
So yes - how to get those other devices to ignore a request which it clearly cannot execute, when there is a more suited device in closer proximity?
I’m thinking I may just change the wake word on the Fires …

Edit - so I found in the Fire Tablet settings (when I actually went in with the intention of changing the alert word) that there is switch that when enabled, ignores the tablet and finds the next nearest echo device; when disabled it responds to the nearest, even if that IS the tablet. The default setting appears to be enabled which I certainly didn’t set like that originally. So disabled and that addressed that issue (although I may still change the alert name regardless for the Tablets as I have other that are in quite close proximity to other dots)

Back to @Tom_Smith question - now that it was responding, I found just using the ‘back’ button on the bottom toolbar closed the Eufy and returned to the FKB with the Sharptools Panel.

Can’t remember exactly how I have set it up, but on mine when the doorbell rings Alexa loads the live feed up, this stays on 45 seconds then auto closes and FL launches back up automatically without having to push back…

its an option in the setting somewhere…

I can see in Alexa you can add a routine to show the Eufy via a custom command - but you have to pick just ONE device - there does not appear to be any option to add additional display devices or even select an additional custom command, as once that has been utilized for first device, it is greyed out, so unavailable.
I might try adding another routine, with same trigger, just change the display device on new routine

p.s. how do you get it to turn off after 45 secs? Haven’t figured that one out yet

Edit - figured that out

Edit - OK figured that part out too. Create another routine triggered by the doorbell press - this time for action first wait for (whatever time you want display to be active) then custom again and ‘Hide Doorbell’ from selected device. Again you only get one device so will need a separate routine to hide for each device you created to display

Routine
Name: Hide Doorbell on KItchen Show
When: Doorbell is Pressed
Add Action: Wait 40 seconds (or whatever you choose)
Alexa, Hide the Doorbell (from Custom)
From: Kitchen Echo Show

and repeat BOTH for additional display devices you may wish to also utilize.

haha yes pal, that’s what I did and wrote more elequently than I could have…

I’d appreciate if you had a look at me post entitled fire tablet advice… any thoughts??

not sure if this works, but playing around with the settings…\the option “regain focus timer” says it bings fully to foreground after some idle seconds…not sure if this was the setting I used at first that automatically made the dashboard load back up after 45 seconds?

could have just been conincidence…

Where is that setting Tom?
I had a quick look through but didn’t find it yet - but even if the FKB comes back to foreground, does it necessarily shut off the Eufy?

its in other settings…

It does indeed work - and checked by putting FKB back into Background that Eufy display was NOT still running in the background.

nice, do you have any other setting activated like disable other apps? or the apps white list?

No, whatever the default is for all the other settings - I only tried that one.
I actually just tested it and then disabled again - that will always bring FKB back to front after whatever time regardless of what app is at front (which may be a good thing depending on your perspective) - I’m content with the ‘Hide’ routines in Alexa for now.

In Alexa, when creating the Routine, in the ‘Add action’ the first one to select is ‘Wait’ (it’s alphabetical so close to the bottom) and then put in whatever time you want (I might actually increase this to a bit longer, maybe a minute); then add the ‘custom’ action ‘Hide Doorbell’ and select the device to action it on

I just used the Hyperlink to App Guide - Linking android apps to a tile
to add a tile to open Eufy App directly from the Home Dash Panel
(When opening from Alexa, you get the display, but the 2-way communication is not enabled) - this allows the 2-way comm since you are actually opening the app.
Other ‘ready to go’ Hyperlinks here - https://help.sharptools.io/portal/en/kb/articles/how-can-i-link-to-other-android-or-ios-apps-from-the-sharptools-io-web-dashboard

I have a question for @josh or @james :
The app opens and then you have to activate the camera (as per image below);
Do you know how might be able to go directly to the camera view without that extra step? (it’s a battery camera, so does not run all the time)?
The vocal command from Alexa does open the camera directly but as mentioned the one downside is 2-way is not enabled. 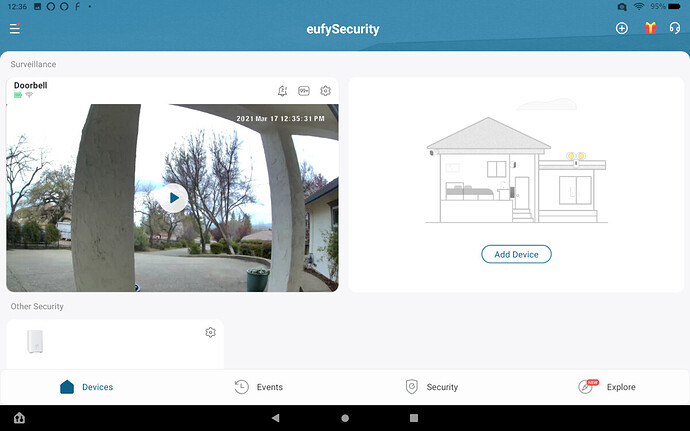 Do you know how might be able to go directly to the camera view without that extra step? (it’s a battery camera, so does not run all the time)?

The Eufy app would have to expose a ‘deep link’ or special intent URL to open a specific camera. Unfortunately most apps don’t do that or at least don’t document it well. You could try reaching out to Eufy to ask, but fair warning that it’s a long shot.

This is well into the ‘tinkerer’ category, but in theory you could do it with an automation app like Tasker depending on what type of tablet it is. Here’s an example triggering a Tasker Profile from a Hyperlink Tile in SharpTools. It’s definitely a Rube Goldberg approach to things where you would have Tasker automate opening the Eufy app and then performing the ‘taps’ on the screen to start the playback.

Note: The Tasker developer does not officially support Fire Tablets, but it is available on normal Android tablets.

I don’t know if AutomateIt, the closest equivalent to Tasker on Fire OS devices supports the various features/plugins that Tasker does to enable this (eg. Autoinput for a special URL to trigger the Profile and being able to simulate device touches)

Thanks for detailed reply @Josh - I presume that ‘deep link’ must exist since Alexa seems to be able to do that (although why it doesn’t also include the 2-way capability is anyone’s guess!)
But does seem like a lot of effort to save a press on the screen so will content myself with the hyperlink to the app