This is great! Really digging the platform after 2 weeks. I’ve got a nice dashboard now with my Spotify playlists available to play on sonos speakers, however, what it seems to do is add the songs into the queue? I haven’t really figured out how the songs are getting added, sometimes it drops the playlist next. After some testing, the rules/commands are working correctly if I clear the queue using the Sonos app. Curious if anyone else is seeing this with Smartthings playPreset command? Is there a command I can add to the rule to clear the queue?

@Mike_O That’s interesting. Does your rule just use the playPreset command and the preset number as the parameter? I can test this when I am back to the office on Monday. (Don’t have a Sono with me now.)

@James correct, the rule executes playPreset. Below is an example of one.

From the testing I did, the rule is working correctly, but the Sonos queue is not cleared before adding the playlist. If I start with a clear Sonos queue the playlist is added. If I then click another playlist it seems to add the playlist and shuffle the queue. So now the queue is made up of any songs already in the queue and the newly added playlist. Let me know if you want me to capture any screenshots of this.

Thanks for checking it out! Just curious if others have noticed this behavior and if there is a way to force it to clear the queue. I noticed if I start the playlist from the Sonos app it does clear the queue so wondering if it is something with the Smartthings/Sonos integration?

Hi @Mike_O, I was able to test it this morning and reproduced the same behavior. playPreset command adds the preset to the existing queue, and I never noticed it before because we always had the shuffle disabled in the queue, so it always starts to play the new preset just added to the queue when playPreset is fired, but the old preset(s) indeed remains in the queue.

Thanks @James! I’ll post over in the SmartThings community too. I confirmed that I see the same behavior via the SmartThings app when playing from favorites. I hadn’t connected Sonos up to SmartThings previously, but I liked the idea of having it available on a SharpTools dashboard.

My primary tablet is a Google Slate, and I’m looking to have some sort of dash with currently playing music just like the jukebox pictured, that is somehow able to show what’s playing on our whole-home audio system via Chromecast audios. We’re either using voice commands or a app/service like Plex or Pandora to bring the music up.

Would that be possible using these instructions? I’m a bit overwhelmed and not sure where to start or if it’s even possible.

I am trying to create media tile for playlist. Just curious, how do you make that Imagur artist image to be circle?

I think @James originally just cropped the images in a photo editing software before uploading to imgur. Now that Themes with Custom CSS are available, you could do it with Custom CSS too though.

In a Theme, you could create a style named ‘rounded-image’, then add the following Custom CSS:

Edit: To add Custom CSS to a Theme, scroll up to the top of the theme editor and toggle the Advanced switch on, then scroll back to the bottom where you’ll find an input for Custom CSS.

Edit2: And I forgot mention that after you create the Theme / Style, you would update your Dashboard settings to use the Theme and edit the Media Tiles on your dashboard to update their Style selection to use your new ‘rounded-image’ style.

*Any custom CSS snippets provided are not officially supported and may have to be tweaked as new platform updates are released.

Thanks so much for the prompt reply. Absolutely helpful!

Edit2 : And I forgot mention that after you create the Theme / Style, you would update your Dashboard settings to use the Theme and edit the Media Tiles on your dashboard to update their Style selection to use your new ‘rounded-image’ style.

Hi Josh, I could follow all Edit1 and 1st part of Edit2, but I don’t get “edit the Media Tiles on your dashboard to update their Style selection”. Can you please show a screenshot for the 2nd part of Edit2? Thanks.

Let me know if this helps… if not, I can record a short video in a bit to show the flow. 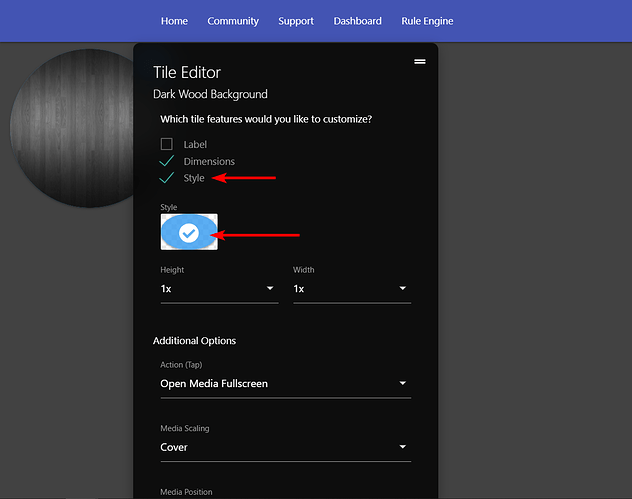