Is there any update to adding the ability to change the volume of a Sonos speaker directly on a tile? Kinda ridiculous to have to open up the details for the speaker just to change volume, a task which I would think people would perform very frequently.

Welcome to the community and thanks for the feedback, @Jeffrey_Garrett.

As you noted, you can access the volume control by tapping to expand the details. It’s on our hitlist to add a Volume / Level control tile, but it surprisingly hasn’t had as much user-interest as we expected, so we’ve prioritized other highly requested features first.

In the meantime, you might be able to use Variables to approximate what you are looking for. You could setup a new Number variable then setup a rule such that anytime the variable changes, use it to set the level of the physical speaker: 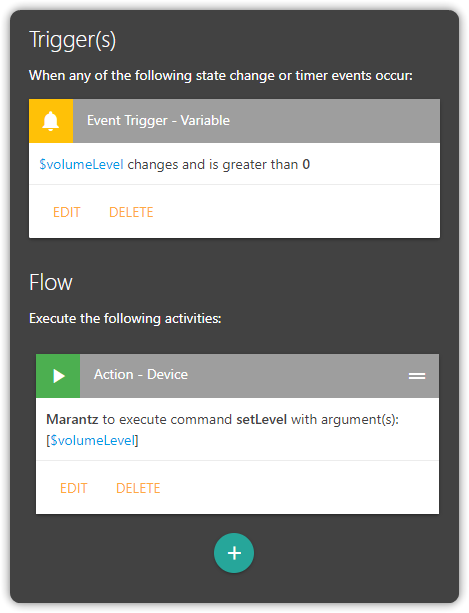 Note that when using a Device action in a rule, you can tap the <> variable icon to use a variable as the value of a command argument:

You can then add the Number variable to your dashboard and enable the Quick Adjust in the Tile Settings which provides up down buttons for quickly adjusting the value:

Hey @Jeffrey_Garrett - I moved this post into the Feature Requests category so other users can show their interest by voting. If you’re still interested in the feature, be sure to scroll up to the first post and cast your vote!

Just added a vote for this - would love to see this

Bumping this is hopes of getting some momentum behind it.

Yeah I’d like to see this too. I ran out of votes though.