Are you looking to use the acceleration attribute of your SmartThings Multisensor in the SharpTools.io Rule Engine?

For example, I previously had a rule setup that would send me an email anytime the acceleration became active on my SmartThings multipurpose sensor: 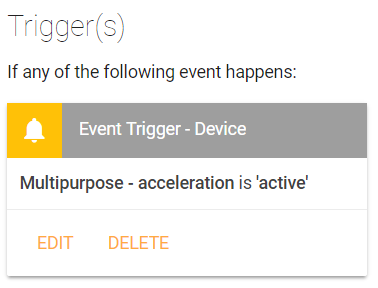 Thanks for reply. Steep learning curve for me. 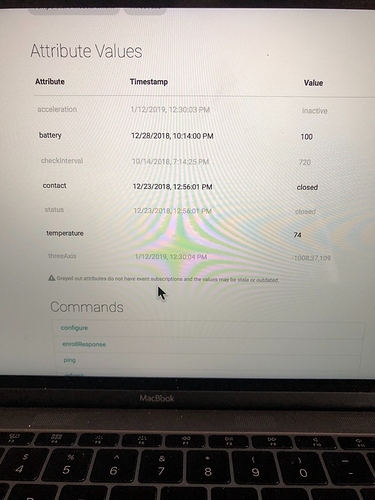 I’m trying to get my multisensor acceleration to trigger a task that I created on tasker. Smartthings sends me a notification everytime the acceleration is trigger so I guess I could use that somehow if needed. Just having problems running tasker task via vibration trigger.

Or is there a way to create a flow from sharptools that runs tasker task? 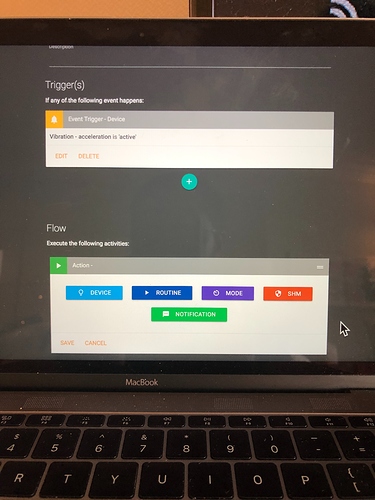 Ah, ok. The steps I gave are for the web-based SharpTools.io Rule Engine.

The SharpTools.io platform and the SharpTools for Android Tasker integration are separate from each other. (I’ve moved this post from the web category to the Android category)

You’ll want to follow the steps in the following help article to get things setup for Tasker events on Android:

SharpTools has a Tasker Event plugin called Thing State which can be used to trigger events in Tasker when a subscribed Thing's state changes. For example, you can choose to subscribe to the Temperature of an Aeon Multisensor and have an Event...

What are you trying to accomplish with the Tasker task?

I have a long driveway that’s equiped with a sensor that links to a kind of doorbell. I also have a cc security camera that faces driveway. I have a monitor that can view this camera but that monitor is also shared to view a baby camera.
I’m trying to have the monitor switch inputs to hdmi1 (driveway) anytime the driveway Bell sounds off so what I’ve done is attached a smartthings multisensor to the speaker of the driveway Bell. Smartthings detects and notifies me everytime already. I’ve already created a task in tasker to send a command to my harmony elite to change to hdmi1 to view the driveway.

All I need now is for the smartthings multisensor to trigger the task in tasker and I thought sharptools could accomplish.

I’ll have you know, I’m an Apple guy and am fresh to android/tasker/sharptools. Thanks for replying.

By the way, I’m running sharptools from a sideloaded nvaidia shield pro (the only android device I own)

Ah, that probably makes things a bit harder / confusing as your Nvidia Shield is probably showing the Android TV interface we built as a proof of concept.

Do you have the Harmony integrated directly with SmartThings? And are you changing the input with a Harmony Activity or a direct input command? (not officially supported, but some Tasker plugins and third party SmartThings community integrations figured out direct commands)

Edit: it’s not officially supported, but you can get the normal SharpTools interface on an Android TV device.

How do I launch the normal SharpTools interface on Android TV?

If you are using an Android TV box which has support for Google Play Services and want to use the Tasker integration, you can instruct Tasker to launch the phone/tablet version of SharpTools by using the following instructions. This approach is not...

A post was split to a new topic: Multipurpose Sensor Acceleration as Tile