How is the left portion of the sharptools done?

@Tim was doing it with custom CSS with a Chrome Plugin.

@Ahmed did something similar just a few posts up by building a simple HTML page as a wrapper and then used an iframe to display the dashboards:

Below is a photo and a screenshot of what I am working on. It’s still early stages and I need to tweak it a bit. But just a rough idea about the look I am after. I’m using jQuery and loading each section into a layer. [image] [image] 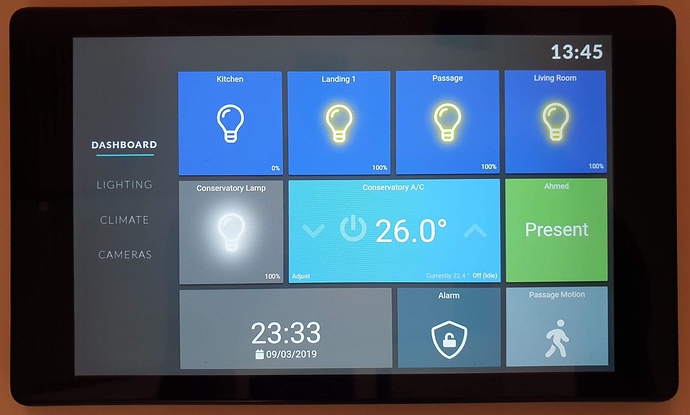 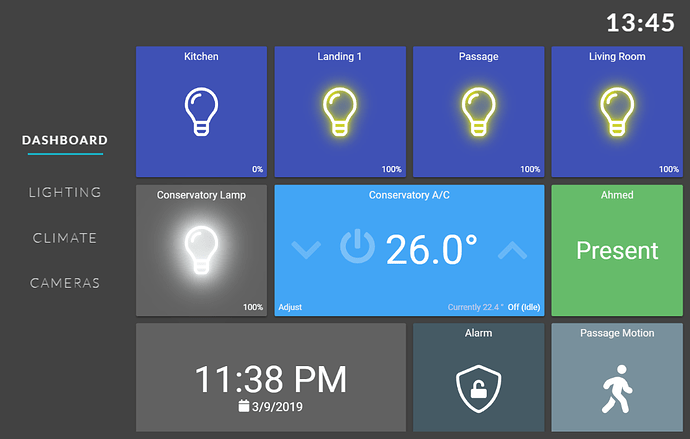 You should be able to do this with just sharp tools panels. The left edge would just be 3 tiles to 3 dashboards. Make the same 3 tiles on each dashboard. 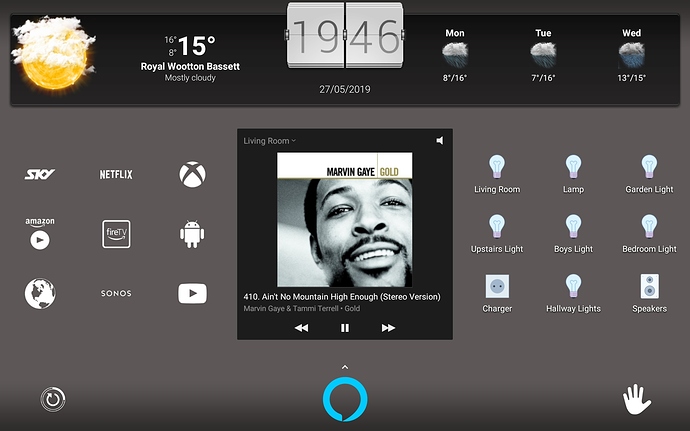 Here is my first project. Wall mounted iPad Mini. Powered from behind from gang box that used to house light switch for the room. Now they are Hue lights so no longer need the switch! See lots of cool ideas posted here to try! I was able to find a radar loop that works but couldn’t really find a local weather forecast that looked good. 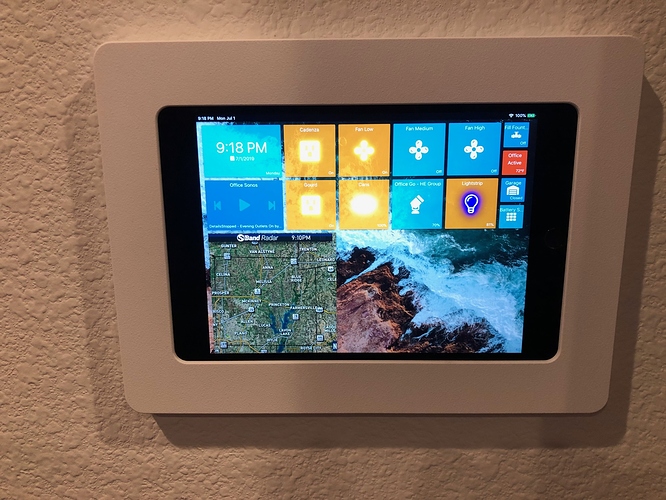 It looks pretty slick and the mount looks nice and clean.

Have you checked the weather widget from this discussion yet?

Tommy- It looks like the weather image you linked to in your original post might include a unique ID for each day of weather. I did a quick search and there are other local new affiliates which use a fixed URL for their weather images. For example, the local Raleigh ABC site seems to use a fixed URL for the image: http://dig.abclocal.go.com/wtvd/WSI_Weather_maps/7dayMAX.jpg Alternatively, there’s a nice weather widget generator at: https://www.theweather.com/widget/ Just make sure to cho… 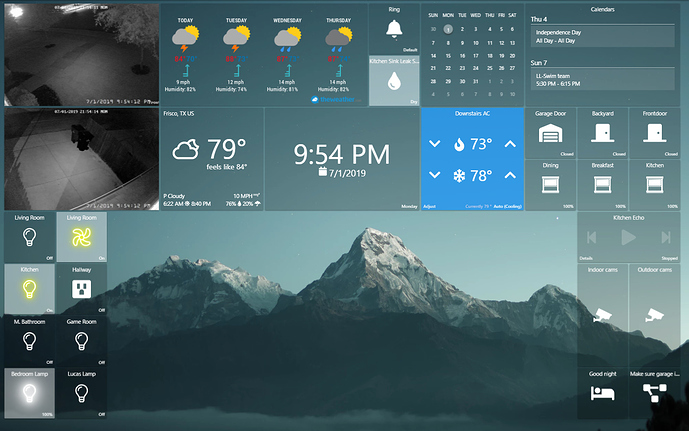 Hi Greg, would you mind showing the wiring/setup you used for this? I would love to also do a clean setup like this.

Here is the mount that I used. I looked for a less expensive one but a wall mount is expensive! If I could have done a flush mount they are much cheaper. 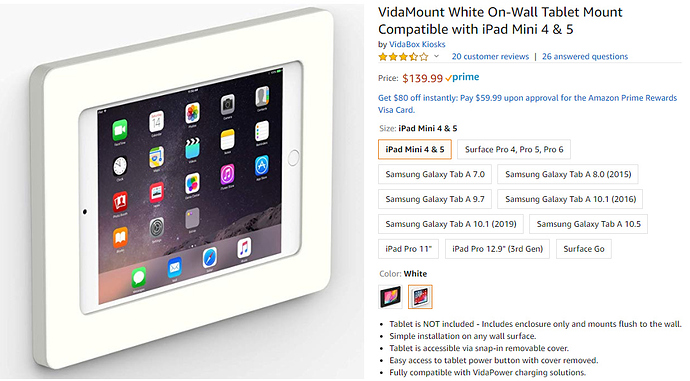 Here is a picture with the snap mount cover off. I had three switches there that are now Hue lights and a fan control that I control with Hubitat so I don’t need the physical switches anymore. 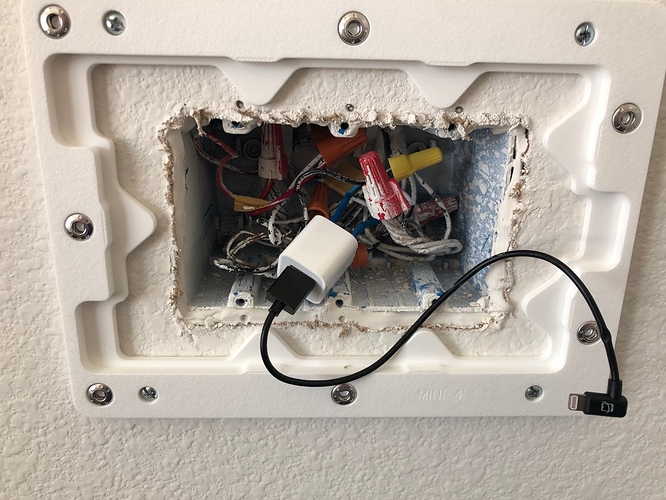 I soldered wire to a 5V small apple charger and then connected it up to AC in the box. I used heatshrink tubing around the charger plugs to insulate them from shorting out on something else. I’m positive that wouldn’t pass building code but with such a small usb charger, I’m not worried about heat or anything. 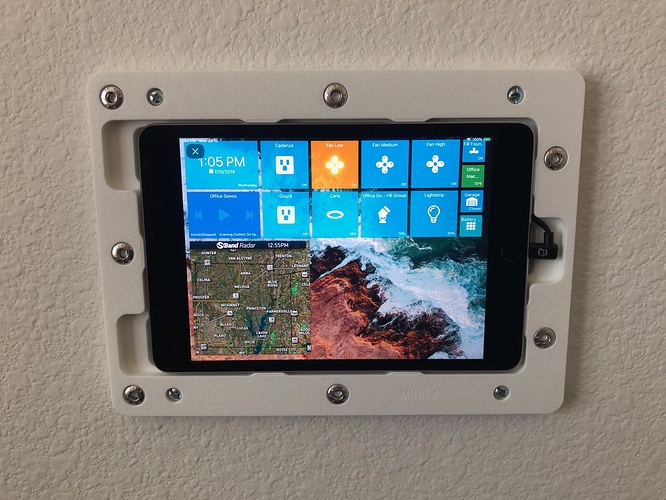 Awesome! THat’s really helpful and I’m sure will really help others as well.

Unfortunately though soldering wires to my actual house wiring is just a little too advanced for me. I’d personally probably just get a recessed outlet and plug into that.

I’d personally probably just get a recessed outlet and plug into that.

Keep in mind the charger will stick out from the wall with most standard recessed outlets which prevents the tablet from laying flush. And since most recessed outlets are single piece units, you can’t change out the normal outlet for a USB one.

A popular solution for installations where you are mounting near an existing switch is the Arlington Recessed box as it enables you to use any outlet you want - so most people use an outlet with USB charging built into it: 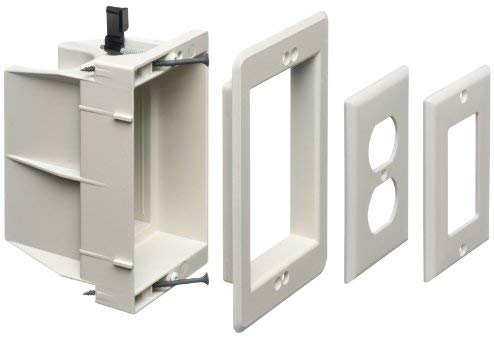 @James aren’t you using one of these?

Yeah, I use the Arlington recessed mount + TopGreener outlet with USB ports for my dashboard setup. So I didn’t have to worry about the USB charger space. 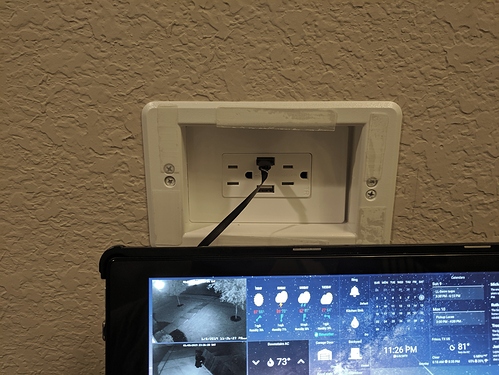 Here is the TopGreener outlet I use. 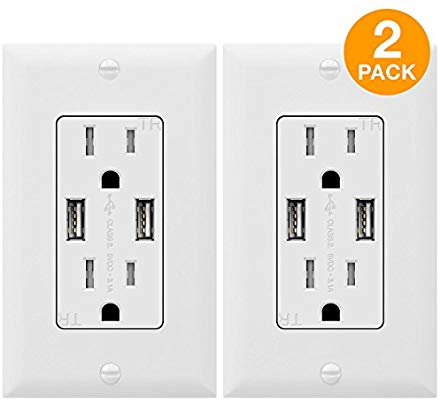 Yes, you are correct! I had assumed I’d either be getting a recessed outlet with built in USB (which may not exist) or a box that allowed me to put in an outlet with a USB.

Agree that is the cleanest way to go however in my case, I had the existing 3 gang box already there as I’m covering up the old light switches.

This dashboard displays on an iPad mini on the dresser in our bedroom. Actually it’s the landing page for four SharpTools dashboards connected in a Prev and Next circle. It’s just the stuff to keep an eye on during the night. 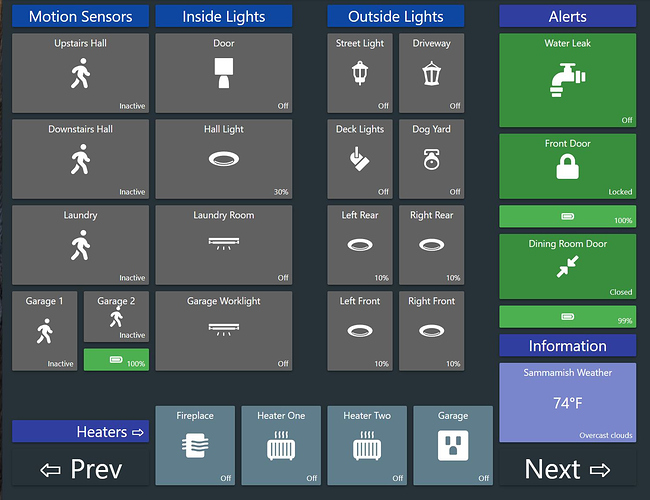 The status of lights controlled by motion sensors are shown. The Water Leak tile displays a virtual switch that will turn on if any of a number of water leak sensors becomes active. To learn which sensor is guilty, the Prev button loads a page displaying the status of each sensor.

[I have just installed water sensors. Our home is currently under repair from the results of a water leak. A $20 sensor would have saved many thousands of dollars. It’s known as “shutting the barn door after the horse has bolted”.]

The fireplace is controlled by a Third Reality smart light switch (Gen 2) mounted on top of a standard paddle-type wall switch. The wall switch contacts connect directly to the gas valve - in parallel with the manual switch. The whole mess is stuffed beneath the firebox floor. I painted the Third Reality switch flat black so it’s not noticeable through the access door. 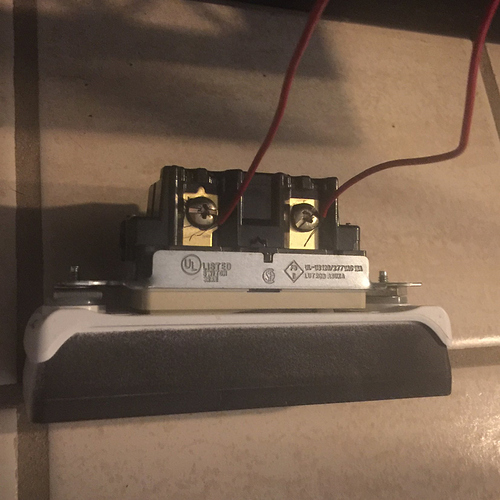 The irrigation system occupies another of the four dashboards, and the remaining dashboard page shows the status of all of the Ecobee temperature and occupancy sensors.

Sten, I applaud your result as well as your determination. I know the challenges of trying to keep a complex layout in order and avoiding the reflow monster.

A post was merged into an existing topic: Show Off Your SharpTools Dashboards!

A post was merged into an existing topic: Show Off Your SharpTools Dashboards!

How do you create the smaller (flat) battery tiles and info tiles? The smallest I can get them is 1x by 1x.