You may already know this and it’s a conscious compromise. If so you can ignore it.

When trying to add a new thing I am unable to scroll to those items lower on the list. 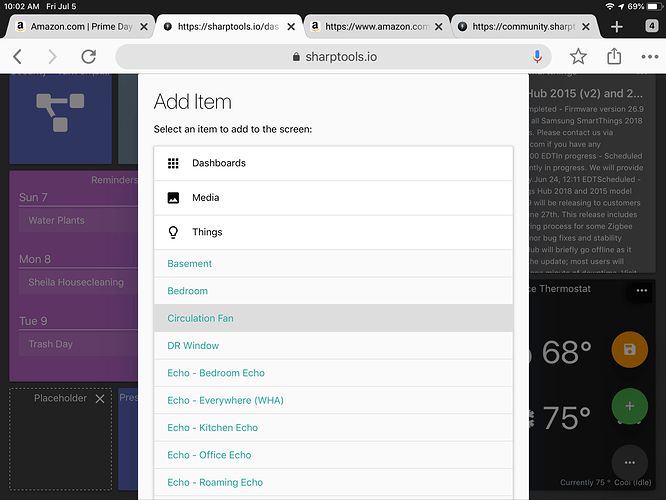 When trying to edit a tile, the edit dialog will appear at the top of the screen meaning I have to scroll up to get to it. Not usually a big deal but in Edit mode if I touch any of the tiles it will grab the tile and attempt to move it vs scroll the screen. You have to try and touch the screen between the tiles in order to scroll the screen, quite a small target.
I would think that while the Edit dialog is up that tiles could be frozen until the edit dialog is closed. 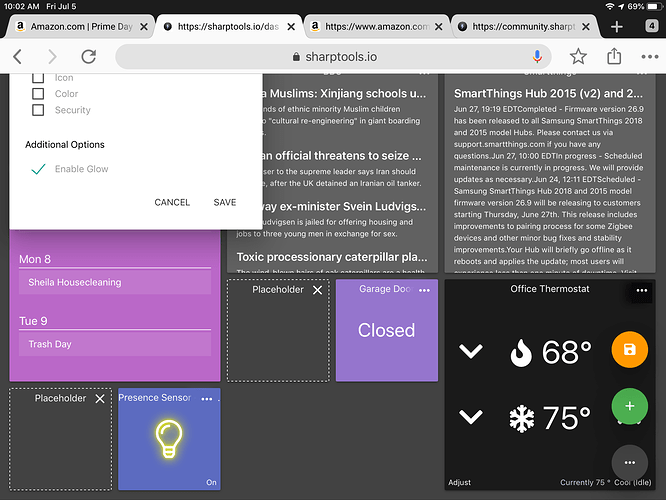 I don’t do any major editing on the iPad but occasionally I might wish to add a new tile or edit an existing tile. Until re-organising tiles becomes easier I would not attempt it on an iPad.

P.S. I’m using Chrome on my desktop and iPad for syncing of bookmarks.

Thanks for sharing. What iPad model is this and what version of iOS is it running?

@kevin
Are you able to scroll the Add Item list?

I was able to reproduce the issue where the Tile Editor appears at the top of the screen (it’s supposed to show up roughly at your scroll position), but I couldn’t reproduce any issues with scrolling the Add Item list.

Edit: I touch and drag starting on one of the floating action buttons in the bottom right to scroll up and down without moving the tiles.

I’m sure it’s happening for you - I just have to figure out how to reproduce it!

The add item list works on my iPhone. The edit item does require scrolling to the top, usually scroll anywhere along the right edge to avoid moving tiles. I don’t remember which screen, but sometimes it is difficult to bottom to save/cancel.

Link to video sent directly to Josh by e-Mail. It does not appear I could upload a video here.

@Gary_Milne and @kevin we’ve included a number of enhancements and bug fixes for editing on mobile devices and iOS in the latest beta (beta program details):

Hey Josh, I have not been doing much editing on my iPad but today I unsuccessfully tried to change the configuration of a dashboard. Basically I could not get to the “Save” button after the changes were made.
You should be able to duplicate as follows:

My iPad was in landscape mode with Chrome:

I was changing the Tile size to custom (100)

The Save button is off the bottom of the screen at this point so I try to drag\scroll the dialog box up to reveal the Save button.

So I bail out unsaved.

Gary-
Thanks for the message - I noticed that this reply came via email. Have you tried the newest beta release? As noted in the post immediately above, there are a number of enhancements related to editing (especially on iOS devices) in the latest beta.

Tried it again on the Beta site and it worked just fine.