When using the blank icon… choosing Icon Glow does not effect the tile at all.

Thanks for the feedback! This is somewhat of an exceptional case in that the “Blank” icon is literally an empty icon. The glowing effect is applied to the icon, so if there is no content within the icon then there won’t be any glowing.

I’m hesitant to add extra logic just for this one icon, so I think the recommended approach would be to use an actual icon if the glowing effect is desired.

I have a request for a new lighting icon: “vanity lighting”, such as above a bathroom mirror.

How about a fountain?

The following icons will be included in the next beta release: 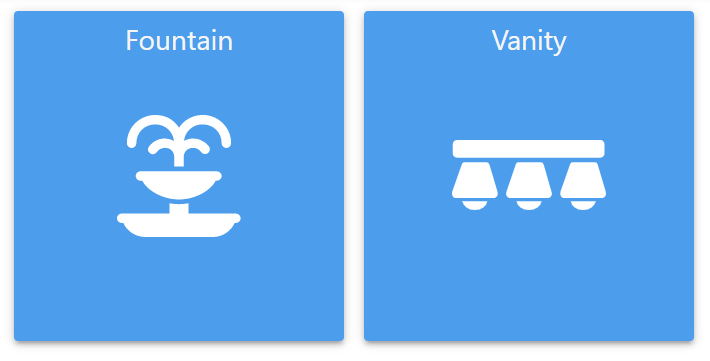 Any ability to add say a generic gaming icon (e.g., a controller) and a Nintendo brand icon?

We’ve noted the request for a Nintendo icon.

Any ideas for a Vacation Mode icon? Maybe a beach chair with a palm tree? Otherwise I would just use text (“Vacation”), but I dont have text as a hero attribute option for a Mode tile.

I’ll get a few vacation related icons added in a future release (plane, tropical island, umbrella on a beach): 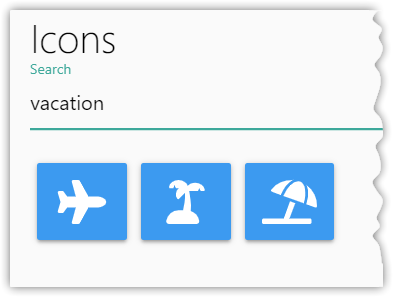 In the meantime, perhaps one of the map / globe icons would work?

Or perhaps the icon that shows up when you search for ‘present’: 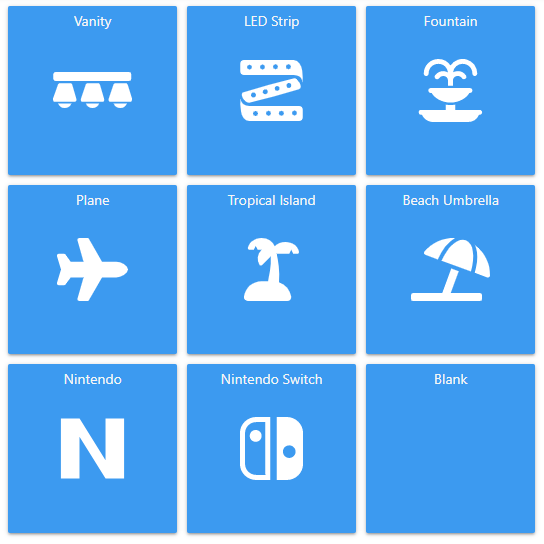 I would really love to have a simple block letter icon for each letter of the alphabet. The primary use would be to identify tiles more easily. I have a difficult time seeing the name of the tile until my nose is almost in contact with the dashboard. The block letter icons would serve as a shortcut to the tile.

Many of the icons are easily recognizable, however if you have a row of tiles with the same icon you must revert to reading the title.

There has been past discussion about a capability to upload icons. Is this still being considered?

Just itching for a way to tinker with customizing icons…

There has been past discussion about a capability to upload icons. Is this still being considered?

Edit: Also note that there are some tricks you can do with Media Tiles and the special Hyperlink Syntax depending on your goal. This wouldn’t give you state driven visuals, but you could use a static icon as your media and then use the special $.runRule("RULEID") syntax to run a rule of your choice:

How To: Call REST API from Hyperlink Tiles

You can find the Rule ID in the URL while editing your desired rule.

Similarly, the hyperlink syntax could be used with the new Variable Tiles which also support the hyperlink syntax if you wanted to just show a phrase, letters, or a number. (In which case the content of the tile could be dynamic if you desired, though it would be textual rather than an image)

Thanks, Josh! I’ve just started to play with using media tiles/hyperlnk for this. It’s over my head now, but will keep plugging away.

Do you have an icon request? Please post it as a new topic in the Feature Requests category.