In the past, I’ve had trouble with devices that don’t actually change. The best and most notorious example is my thermostats. I have various automations that turn on the Fan or set it back to Auto. About 20% of the time, when the command is sent to set the fan to on, it doesn’t, so in WebCoRE what I did to solve this problem is to set up a Repeat Action with an Until. When I’d want to set a thermostat fan to On, I’d repeat turning the thermostat fan to on every 5 seconds Until that thermostat fan was On. Is there an equivalent action I could perform here that could be used for the same purpose?
One thought I had was to just set the fan to on, then set a 5 second delay, then set the fan to on, etc., maybe 3 or 4 cycles; enough to be sure it actually did, but I hate sending the command that many times, unnecessarily when I know 80% of the time, one time is enough.

Issuing a Refresh every 2 minutes to Receive Current Temperature from Thermostats
BeardedTechGuy November 9, 2022, 4:03am #2

Not sure if there is a better way, but I would use a loop timer to accomplish this. It would be a separate rule that you’ll trigger from your thermostat rule something like this: 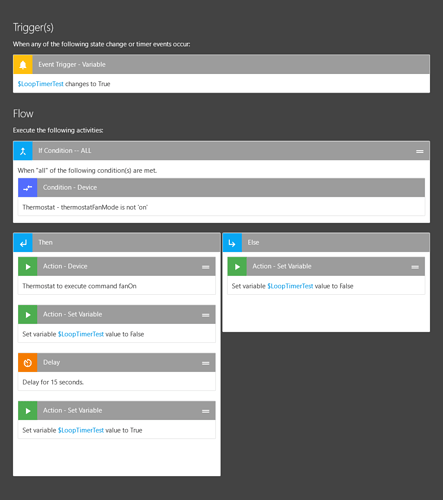 To trigger this loop timer rule, you’d just set the LoopTimer variable to true to kick it off in your thermostat rule. Honestly, I would probably just set the variable to true anytime you want to set the fan to on so that way this will always get triggered. It’ll run once which should turn the fan on, and if it doesn’t turn on the loop timer will keep looping until it does.

Thanks man. This will work nicely.