The difference is basically what you’ve noted.

Tapping the fullscreen button from the menu will put the dashboard into Kiosk Mode AND take the browser full screen if the browser supports it.

Is there a way to enter full screen using an embedded URL? I am not at all familiar with internal browser functions so I apologize in advance if this is a dumb question.

If you want to have a dedicated fullscreen dashboard, Fully Kiosk Browser is usually the recommended solution:

What are you looking to accomplish though?

Thanks Josh. Unfortunately, That won’t work on my device. It’s not a big deal. It works very well the way it is. Not knowing a lot about browsers I thought it might be something that was simply embedded in the URL.

What are you looking to accomplish? Perhaps there’s another approach or it’s something we might consider building into a future release.

I was just looking for full screen without having to press the full screen button in the menu. I think I incorrectly assumed that it was very simple and being done with a command imbedded in the URL.

My use case is very narrow on an old device. It’s definitely not worth spending development time on when there are browsers (Fully Kiosk, etc.) that will accomplish this on a vast majority of the devices currently being used for Sharp Tools. I really appreciate the offer to help though.

This is how I solved this issue.

Opened sharptools dashboard in chrome on my iphone. Clicked “…” and then “fullscreen”.

I then copied THAT address (even though it only included ?kiosk=true and nothing about fullscreen"), and opened it in safari. It opened right away in true fullscreen, and then I “added to homescreen”.

I tried a few times within safari itself and maybe it was something I did but it didnt truly work when I tried it all within safari. That being said I was jumping all about and I am timed out right now from trying “due to unusual activity” as I was making about 12 dashboard apps at once. Ha

How did you copy the address if the browser was in full screen and the address bar was not on the screen?

Chrome has the same feature on modern Android devices. It basically adds the dashboard or whatever page you are on as a ‘web app’ as @xnbsx mentioned. You mentioned that you were using an older Android device and Chromium (instead of Chrome), so I’m not sure if this option is available to you in any of your browsers.

Did you know that you can add the SharpTools.io web app to your iOS or Android homescreen? When added to your homescreen, SharpTools takes advantage of a number of features to make it feel more like a native application including displaying an icon on your homescreen and opening fullscreen like a native app. iOS Instructions These instructions apply to iOS devices like the iPhone and iPad: Navigate to https://sharptools.io in Safari Mobile Optionally, navigate to your desired dashboard Note:…

No, the address bar is gone when selecting full screen in Chromium. I would have thought Chromium and Chrome would act the same since I believe they are both sourced from blink. Oh well.

I am experimenting with smaller tiles so the page doesn’t scroll. It seems to be working ok. This is the tablet that sits by my chair that I use for ST, Harmony and IP camera monitoring.

On my wall mounted tablet, I made a web app from the same link I made for my iOS web app, and both of them worked great. full screen, no address bar. The only issue is on Android, the navigation/account bar is still displayed on the top where iOS it is not. 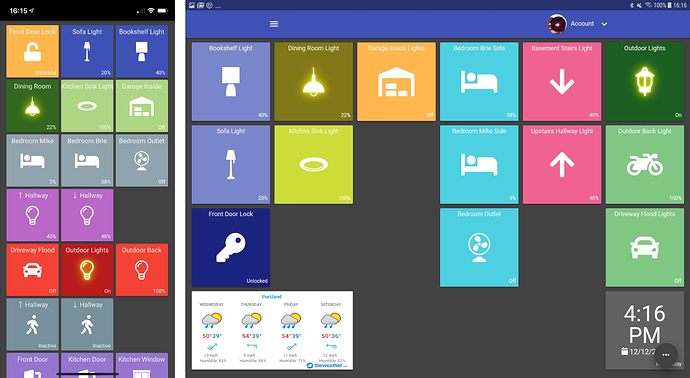 It doesn’t look like the app is in Kiosk Mode on the Android screenshot. The easiest way to do this from your Android device is:

I’ve read this thread but I don’t think my question is answered.

I’m using Fully Kiosk on a Fire 10 and have it configured to start the dashboard URL on power up.

Question: Is it possible to start the dashboard in full screen? As it works now, one must press the “…” menu and select full screen from there.

You’ll want to include ?kiosk=true in your Fully Kiosk Browser Start URL.

So if your start URL is currently:

You’ll want to change it to:

Many thanks. Works fine - as you knew it would.

I am using fully kiosk with my fire hd 8 (10th gen) and Fire hd 10 (9th gen) but it is super laggy and I can’t get the browser to go away no matter what I do even in full screen.

Hi @Denver, that certainly doesn’t sound right. Those newer Fire tablets should be just fine. Here are some troubleshoot steps/tips:

can’t get the browser to go away

What do you mean? Do you mean you cannot to you cannot close Fully Kiosk Browser or you cannot navigate between dashboards?

By browser I am referring to the URL at the top of the page when I go to kiosk mode. I want it to be a true full screen like action tiles is. I have 18 tiles total with no spacers which really isn’t that many for it to lag sooo bad and I have the Fire OS version which was sent to me from someone else at sharp tools. I am using fully kiosk APK fire OS. I had initially downloaded the none fire one off the play store and had little to issues but very minimal lag. And when i download the fire OS version above you sent it made it lag horribly.