I am looking to see if SharpTools is capable of sending emails/sms with attributes details?

For example, I have hubitat connected with a temperature sensor, and when the temp reaches 75F I want to send an email:

{Device} temperature is {CurrentTemp} reported at {Time}
Does it have this capability?

Hi @David_Pakhnyuk welcome to the community! Sending email/sms/Pushbullet/Pushover notification is supported, but not the dynamic device attribute at this moment. This is one of the use cases of the Variable feature that we have in our list.

Do you need the temperature reading in details or do you care if the temperature reaches some thresholds like 75 and 80? See below for the workaround to get notifications when temp reaches 75 and different sms content when the temp is above 80. 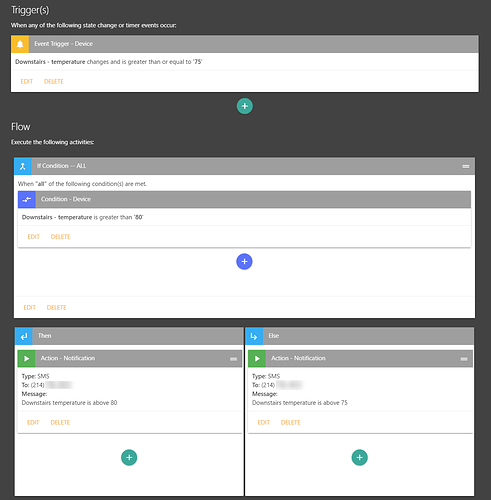 Again, this is not exactly what you were asking for, but I am wondering if this may meet your needs.

Hey James, Thanks for the quick reply… This method can work, but I was hoping for the variable attributes. Something similar to IFTTT…

When will you have the variables available? 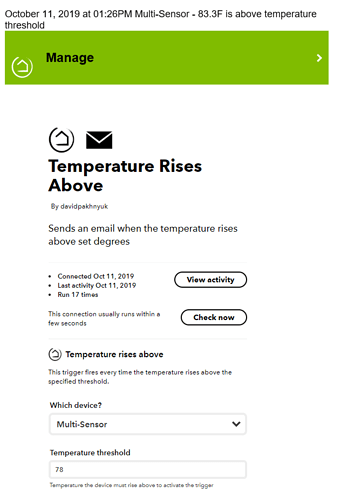 I don’t have an ETA, but our task priority is based on the user feedback we received. So your feedback is definitely important for us to prioritize our work.

Picking up this topic again. I’m looking to collect all my battery levels as variables and then send me a weekly report showing the battery levels. I can easily collect them as variables, but how do I include the variables in an email or notification communication?

I would like to see this as well, with the ability to select a group of sensors and notify which sensor activated the trigger, and what the readings are. This would reduce repeating the same program for each trigger over and over.

@James has been actively working on the concept of ‘context variables’ along with the ability to include variables into notification content. 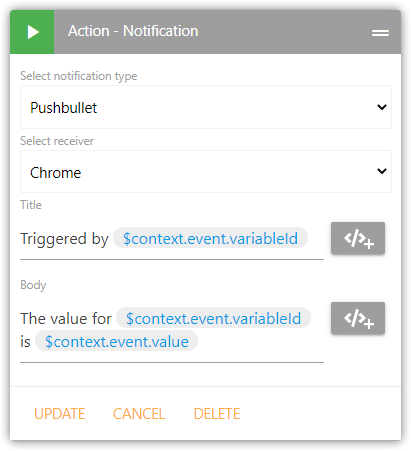 In the following video clip, I briefly show how you can select a context variable (or a regular variable) and include it into the notification content. Just a reminder that this is a working demo from an internal development build at the moment, but hopefully it gives you an idea of what we’re working on.

Yes please! I have a few use cases where I would like to send an email with sensor attributes included.

Welcome to the community @Darren_Kent! Be sure to scroll up to the top of this post and cast a vote!

Voted. This would be hugely helpful.

@David_Pakhnyuk, @Tony_P, @Tony_Y, @Brian_G, @Darren_Kent, @Doug_Renze This Variables in Notification Content feature was released for beta testing today along with the Context Variables feature. Please go ahead to test it out if you are in the beta tester group, or pm @support if you’d like to join the beta tester program.

Thanks for the update! I’ll probably wait for it to go GA. I’m in IT, and I participate in too many vendor beta/early release programs for my systems as it is…

The Variables in Notification Content feature has been released to SharpTools.io in late Dec 2020. See the release notes from the post below.

Variables are a Premium feature. If yo…

Thanks for the feedback and interests. Close this thread now.