Any thoughts of supporting Hubitat?

Not to answer for Josh, but until he responds…

I asked this question a few weeks ago and his answer was, “It’s on my hit list”. I know he has a Hubitat (one of the earlier) and has done some basic porting.

A lot of my Smartthings automations rely on presence and other integrations with my Android phones, all of which depend upon Tasker and SharpTools. So, complete conversion to Hubitat won’t be until SharpTools comes over.

To be transparent as possible, I’m still working on wrapping up some improvements to reliability of the Tasker integrations thanks to Android’s Doze mode (see details here) and there are a few improvements I want to get rolled out with the SharpTools.io web dashboard before I look at other integrations.

My long term vision for SharpTools.io is to expand the capability to integrate with more smart home platforms and individual smart devices. Considering that porting apps from SmartThings to Hubitat is relatively straightforward, it’s logical that it would be a decent candidate for the expansion.

I would note that my initial plan for Hubitat would be a cloud based integration (although I’d personally like a local integration at some point).

The latest SharpTools.io platform release actually includes the backend code for Hubitat. We are working with the Hubitat team on official release. 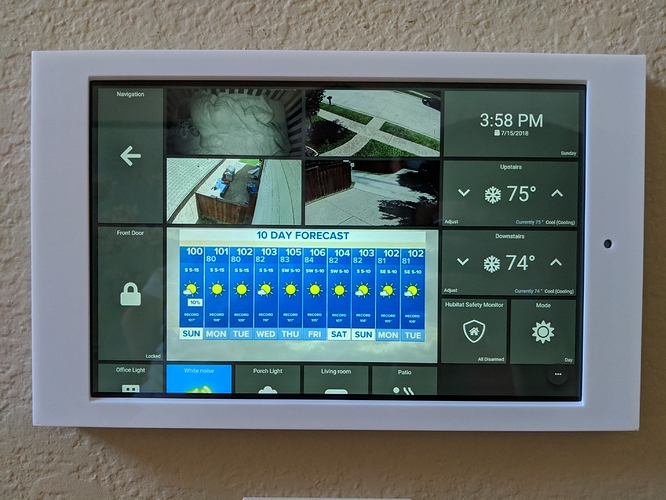 I’ll need to do some work on updating the mobile app to use the new platform integrations, but we are headed in the right direction!

Based on discussions with the Hubitat team, I’m hopeful they’ll have the connection included in the next Hubitat firmware release. Then we can flip a flag to enable it on our side as the code is already released on the SharpTools.io platform.

Great news, @josh ! Assuming the Hubitat integration is going to be cloud-based, but … ???

I use SharpTools on ST for several things, but the critical functions are setting modes based on presence. Will those two items be implemented?

So when the connector is released on Hubitat, it will support SharpTools.io web dashboards and Rule Engine, but the SharpTools mobile app will not have Hubitat support until we are able to rework it.

That being said, since the SharpTools.io platform has cross-platform support between all of the supported connections, you can use the Rule Engine to ‘sync’ Hubitat with events on SmartThings.

For example, you could use your existing integration with the the SharpTools mobile app to set a SmartThings mode based on presence… then using the Rule Engine you could create a rule that says:

And for reacting to events from Hubitat on your Phone, in place of the ‘Thing State’ SharpTools Tasker plugin, you could use a rule along with Pushbullet (which also has Tasker support).

I’m doing something similar with Send Hub Events on ST linked to Hub Link on HE already.

I just stumbled upon Sharptools.io tonight, so forgive me for any ignorance here, but I have both Hubitat and ST running and handling different devices. Is it going to be possible to have a mix of both Hubitat and ST managed devices on the same dashboard?

Yes! In my screenshot a few posts up, the lock and thermostats are on SmartThings and the rest is on Hubitat. So you can definitely mix and match devices from different platforms on a single dashboard.

Same thing goes for the SharpTools.io Rule Engine - you can mix and match between supported platforms in one or more rules.

Thanks! I’m looking forward to monitoring this when you have Hubitat functionality available for all. Thanks!

The Hubitat integration for SharpTools.io is now available as part of Hubitat Hub firmware 1.1.3. You can find more details on the integration in the following thread:

We are excited to announce support for Hubitat Elevation - the home automation platform that focuses on fast, reliable, local execution using the Hubitat Elevation Hub! Important: You must upgrade to firmware 1.1.3 or newer on your Hubitat Hub in order to take advantage of this integration. This release includes support for Hubitat via the SharpTools.io web dashboard and Rule Engine and includes the ability to: View and control your devices React to device changes and build rule conditions…

Hi,
Thanks for supporting Hubitat! Just tried to link the app but didn’t get very far.

I’ve tried deleting the app from Hubitat and reloading it. Keep getting the same thing. Don’t see anyway to delete my SharpTools account, so I could reset that.

Hm. Invalid Request is usually reported directly from the remote OAuth servers. For example, I saw that in testing if I wasn’t on the latest Hubitat firmware release which has the SharpTools App available.

What are you seeing in your Hubitat logs when you try to authorize things via Manage Connections from SharpTools?

Edit: handling via PM on the Hubitat community.

Update… @josh got me up and running again. Seems somehow my Hubitat wasn’t taking to the cloud. A second reboot after the update has fixed it.

Can you clarify what you mean by “won’t stay connected” and “SharpTools won’t connect anymore”?

The log message indicates that your Hub has a valid SharpTools.io API token and is able to successfully send data to the SharpTools.io platform.