I’m using the fan tile with Lutron Caseta fan speed controllers via Hubitat but I’m finding that only the Low and High speed settings work. Medium Low and Medium High don’t change anything (and thus leave the fan set to Low). I believe I’ve read before that the Caseta uses different fan speed (names) to other controllers (Low, Medium, Medium High and High), is there a way around this with the fan tile or is it not currently compatible with the Caseta as the speed don’t match (and Hubitat doesn’t supply the supported speeds)?

As there haven’t been any replies, I assume nobody else is trying to use the Caseta fan controller with SharpTools, but for future reference, I was able to come up with a solution using a virtual device and a couple of Hubitat rules, as follows:

First, create a Virtual Fan Controller device on your Hubitat (name it something similar to the physical fan controller you want to use, I append “VF” onto the end of the name). 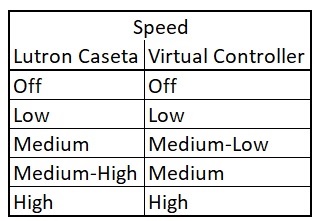 My Rule, for example is here (you could do one rule per speed, but I prefer nested conditional actions in one Rule personally):

Finally, add the virtual fan controller in the SharpTools app on your Hubitat, add the respective item to your dashboard and you’re good to go.

The only “downside” is that the fan speed reported on the dashboard reflects that of the virtual controller, so it won’t match the speed names on the Lutron Caseta app, but cycling fan speeds works perfectly so I’m not really bothered about that too much.

I hope this is useful if anyone else finds themselves in a similar situation.

Thanks for sharing your workaround!

Is there a way to remove the “Medium Low”, “Medium High” and “Auto” from the Fan Control Tile so the Speed Picker only displays Off, Low, Medium, High and On? Thanks, Glenn

No worries, I hope its helpful.

Yes, I already voted for that one too!