For a Delayed Alarm Trigger off Entry Door to allow operation like old-school alarm where the Entry or Exit door does not immediately trigger, to allow time to Disarm:
This could be for Entry into the house when the Alarm is Armed, to give time to Disarm before it triggers, or perhaps from inside the house in the Morning, if your Auto Disarm has not yet occurred, and you need to let the Dog out and possibly forget to manually disarm:

Does this work? Am I missing anything?

Don’t need a reset on the Door Sim since it won’t be set if disarmed before timer expires?
And won’t set the Sim under not-armed conditions … ?

And whether it triggers or not, you would still get a reset off disarmed to reset the door sim condition?

Hi @Bethel_Lane, I might have missed something, but why do you need the Entry Door Sim in this case? How about creating two separate rules like screenshots below to keep the logic simpler? 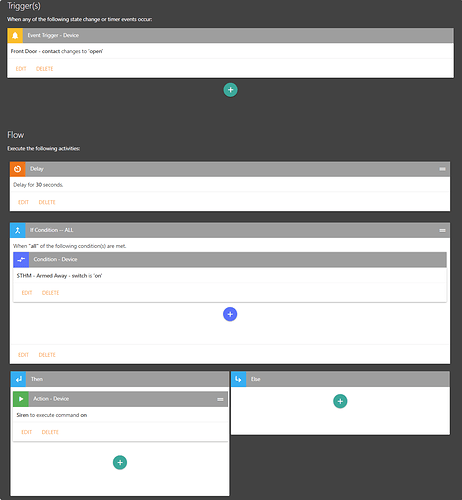 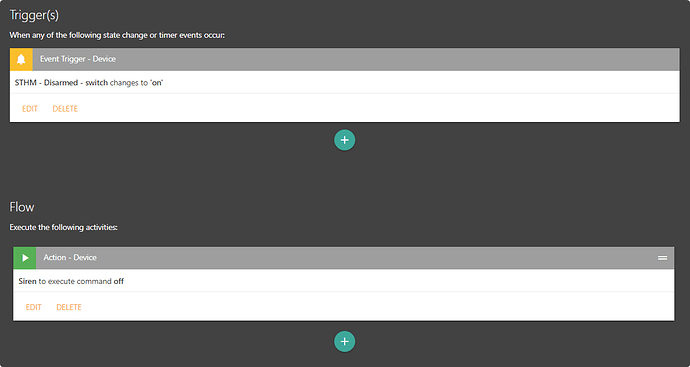 Thanks @James
The problem (as I see it) with your scheme is that you are not truly triggering the STHM Alarm, only operating the Siren. The STHM already has its automations for what sensors it triggers off and the resultant action when it triggers (whether that be siren(s), strobes or notification etc)
And you would have to delete the Door from the STHM list of triggers or it will trigger the STHM anyway, as soon as it opens.
My suggestion maintains the ‘normal’ STHM trigger mode other than it uses a Simulated Switch rather than the Actual Switch. 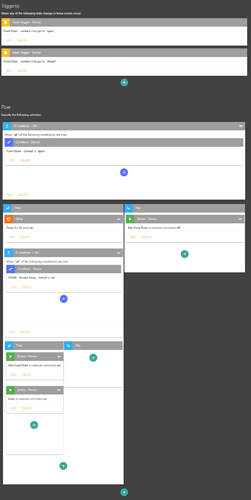 I didn’t have the Siren Off in this rule, because I think it makes sense to be turned off when STHM is set to disarm as mentioned in the Rule 2 above.

Let me know if this meets your goal better.

So I’m not following need to have door change to either open or closed - you essentially want the trigger to occur in relation the sensor changing to open, that should initiate the trigger, even if it delays 30 sec before executing (i.e. it’s not a condition that it is in either particular state, only that it had even that momentary change) - why would it also need to happen if changing to closed??? I’m confused on that one …
Then - in your scenario, again, you don’t need to add the siren, as the STHM will address that already
And for the If/Else, if STHM was not Armed (i.e. it had been Disarmed within the 30 s) then the Sim would not set therefor you don’t need to reset it to closed. However it might need the Sim Reset for condition where STHM is Dis-Armed AFTER the 30 secs has elapsed (i.e. Alarm has been triggered)
I think this does it … 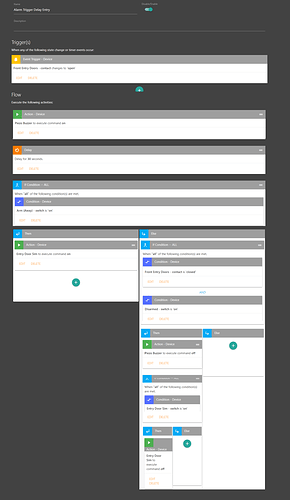 p.s. - is there an efficient way to make images of a rule?
I’ve been doing multiple screenshots and cutting/pasting - must be an easier way?

why would it also need to happen if changing to closed??? I’m confused on that one …

In your case, once the Sim Door is turned on and tripped STHM alert, it needs the physical door to be opened again to trigger this rule one more time and wait 30 seconds to evaluate if the buzzer and the Sim Door should be turned off. But this may be what you wanted anyway.

in your scenario, again, you don’t need to add the siren, as the STHM will address that already

My siren is a physical siren converted from the existing security system using Konnected board, and it needs an automation somewhere so it can be turned on/off based on STHM status in my setup.

Yeah I agree that an easier screenshot function should be provided in the Rule Engine interface to make the rule visual sharing easier. I just created a Feature Request for this, and feel free to cast your vote.

I use ShareX on my PC, and take “Scrolling capture” when I need to take rule screenshot, if this would help you in the short term. 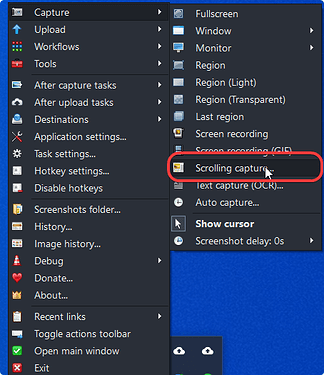 I certainly don’t mean to be argumentative - especially since I asked for review in the first place!

But I still don’t get your logic with this flow.

I don’t believe that’s what your flow is doing
I find talking it out helps:
Your case - If EITHER the Door changes to OPEN OR the Door changes to Closed THEN, IF the Door Contact IS open THEN, Delay 30 seconds and IF the Armed Away is (still) ON, THEN Turn ON (Open), the Door Sim;. ELSE (If Front door contact is NOT open) Then Sim Front Door to Off (closed)
So digesting that

In my case, my STHM “alert” will be ended whenever the physical door is closed because the Sim Door is turned off immediately,

But you don’t want that - otherwise, that statement taken literally, says I can just quickly open and close the door and the alarm will never trigger.

My siren is a physical siren converted from the existing security system using Konnected board, and it needs an automation somewhere so it can be turned on/off based on STHM status in my setup.

Mine is too (on Konnected Panel) - the Siren can still be set up in the STHM directly and of course the STHM still sends the signal back to the Konnected board to turn siren on when there is an ‘Alarm’ Trigger condition.

I use ShareX on my PC, and take “Scrolling capture” when I need to take rule screenshot, if this would help you in the short term.

Brilliant! I had not heard of that so going to add that now!
Thank you for the feature request

I actually just noticed the left side Security, Smoke, and Leaks are buttons and can be tapped to configure the Response, including turning on the Siren.

I assume this is what you meant by the STHM will take care of the siren. 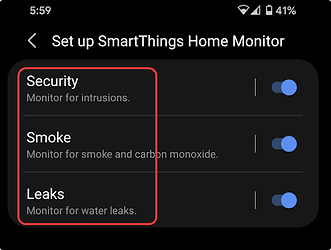 I see where the confusion came from. The IF condition checks the condition logic at the moment it is executed, and decides which path (THEN or ELSE) to continue. Once it’s in THEN/ELSE path, it doesn’t care about the condition(s) in the IF logic any more but just continue to the next step.

In this example, if the physical door is opened, the rule will be triggered, and it takes just a few milliseconds before the IF condition decides to go THEN/ELSE. If the physical door is closed quickly then, the rule will be triggered again, and will evaluate & process individually without impacting the execution of the first trigger (door open). So if the STHM ArmAway is On, the first rule execution will continue to turn the Sim Door on, (and turn on the siren in my setup), even if the door is closed quickly afterwards.

Should have mentioned that it will be even faster to use Context Variable in the first IF condition, because it doesn’t need to query the device status but just use the triggering event’s context info directly. 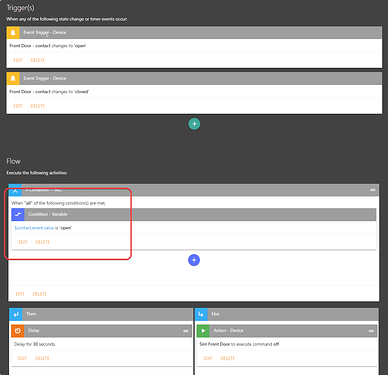 I thought you might have been unaware of the response configurations

- and of course you also configure it for your trigger conditions
(so for example for away you include motion detector; for home, not; and you can configure entry doors sim to be representing as many as you want - maybe front door, or door in from garage is good for ‘away’ condition, but home you might also want to include back door, like for letting dog out when you forget alarm is armed and used to having it disarm on a schedule - someone asked regarding that very scenario on Konnected FB!)

But I still see that (at your least initial) flow as:

Initial trigger is ‘door opens’ as Trigger and then also simultaneously presents the ‘If’ condition (door is open)
So you will immediately get a Then action (because it is open at that very instant) so the ‘Else’ becomes moot at that point, right, from this flow action? (hence my saying the Else is misplaced at that point of this initial flow condition);
But also because your initial Triggers also incl Door changes state to Closed option, that would generate a NEW (second) Trigger which, because door is now closed, would create the sim closed Else condition - but again, it would not have been set to be open anyway.
So again the way I read that is
You would have TWO back to back processes activated
The first (door changes to open) sends it down the ‘Then’ path - delay 30 secs etc
The second (door changes to closed) THIS time sends it down the ‘Else’ path (I think this is misplaced here as it really doesn’t achieve anything)
Meanwhile the initial ‘Then’ action is still proceeding -
Waits 30 secs and if the Alarm is armed, then set the Door Sim to Open.
But I don’t believe your Door Sim will reset during this process because of the misplaced initial Else location in the flow - and I think mine addresses that?

If the door is closed after 30 seconds is not a concern for you, then your rule may fit better. Otherwise, you may combine two to cover both scenarios.

The other alternative is to replace the Door closed trigger in my rule with Door stays closed for 31 seconds (to be larger than the 30 seconds window), so Sim Door will always be reset to off 31 seconds after the last door closed event. 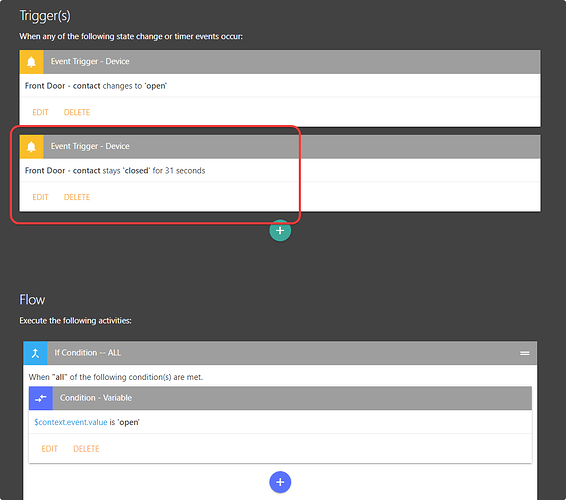 See the Context Variable release announcement and rule examples below.

(If it the door is closed after 30 seconds, your rule won’t reset Sim Door;

Yes, you’re right
This has been good process just to talk through this 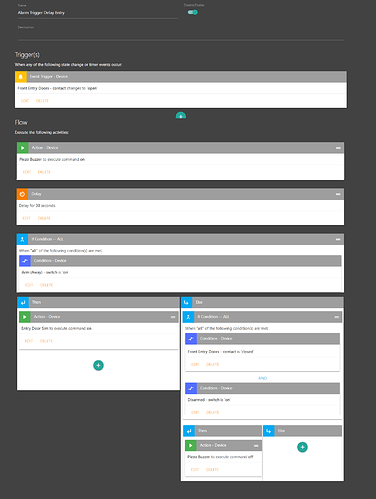 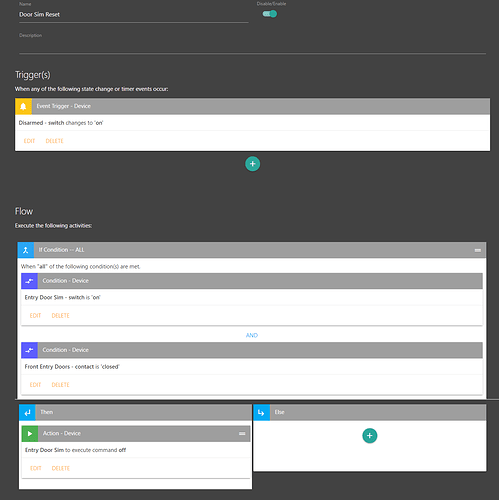 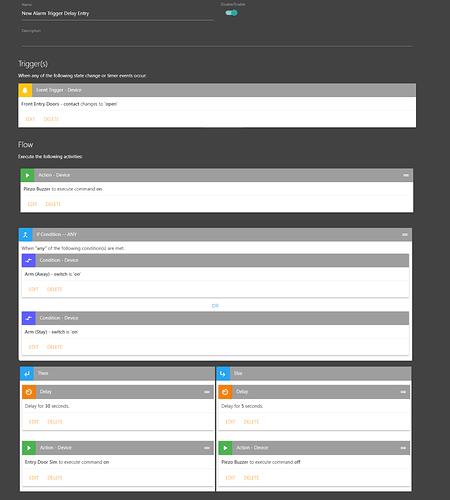 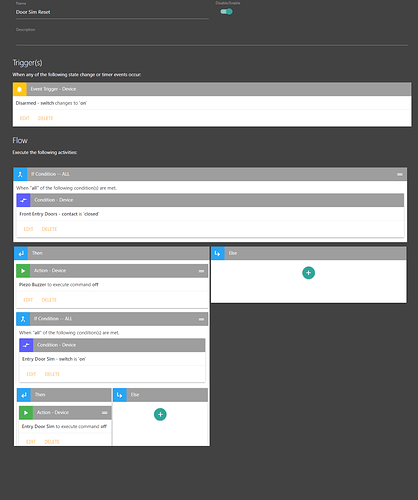 Got around to empirical testing:
Amazing how things look good on paper, but the acid test proves how it really works - or NOT in this case

The first thing I found was that it was not resetting regardless of what I tried - finally, when looking at the ‘disarmed’ condition, I realized that I had made that ‘simulated switch’ actually a simulated LOCK!!! (that was so that I could put in an unlock code in Alexa for verbal command - you can’t do that in Alexa with a switch, it has to be a Lock)
Changed that and now the Reset was working
(For those using a std simulated switch in SmartThings for the Disarmed, just use switch state here)
Then I found that even when I disarmed it (before the 30 secs) it still proceeded to turn on the Sim, although it did Dis-Arm and turn off the buzzer
That was a fundamental error in the Flow - as soon as it satisfied the initial armed condition, it immediately processed the Sim-On command after the delay, even if the disarmed subsequently takes place.
So I just added another ‘If’ condition to check that is still armed (or actually NOT Dis-armed) before it turns on the Sim. Ergo if it HAS been disarmed it will not set the Sim

I have now tested all the permutations* with these changes and it works.

This is the final (I think!!!) rules
(incidentally - I made these images by the method I added to the Quick Rule Screenshot Feature thread - very efficient) 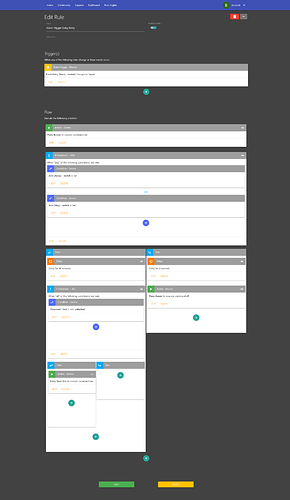 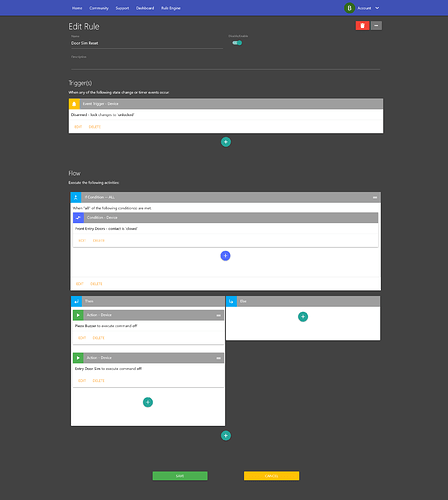 The updated rule does make sense, especially adding the Disarmed check before turning on the Sim Door.

Hi my friend, I share how I would do it (now I have my ADT/ST Panel) connected to Smartthings, and its 100% handled in Sharptools I once handle delay but decided trigger siren immediately.

Trigger: WHEN any of these events occurs:
Switch CHIME_ALARM_WARNING stays ON 10 seconds

Trigger: WHEN any of these events occurs:
MODE changes to HOME

Flow: Switch ALARM _SIREN to OFF
Switch CHIME_ALARM_WARNING to OFF

To change modes you can make the proper automation STHM->Mode in New App.
Hoping my idea helps.

Thank you @Carlos_Juarez - I’m good now with what I have, but I’m sure these suggestions will benefit others.