Button that utilizes HE virtual button

Good day,
I would like to request that a button be implemented in Sharptools that will activate a button in Hubitat.
case usage/example - I wish to create a dashboard that has controls for volume through Harmony driver ( I could also control through the Denon amp driver) instead of using a switch with auto off set to 500 ms. While this works you have to press and release for each volume step up or down. A pushed button will react the same but a held button would continuously raise the volume until released.

Thanks for the submitting the feature request, @Robert_C – be sure to scroll up to the top of the thread and cast a vote.

And thanks for sharing the clarifying use case. I can see how the delay from the ‘auto off’ on a Hubitat Virtual Switch might not work as well here as you would have to wait to tap between each press.

Hubitat buttons can be authorized to SharpTools and used to trigger SharpTools rules. Historically, buttons were considered sensor devices within Hubitat – meaning they only reported their state when a button was physically actuated. It seems like the concept of virtual buttons as actuators has become more popular in the HE community though, so I can certainly see the use case here!

As something of a workaround, you could use a SharpTools rule to run the device commands and add that rule directly to your dashboard. For example, I might create a rule with just a device command in the Flow (no Triggers): 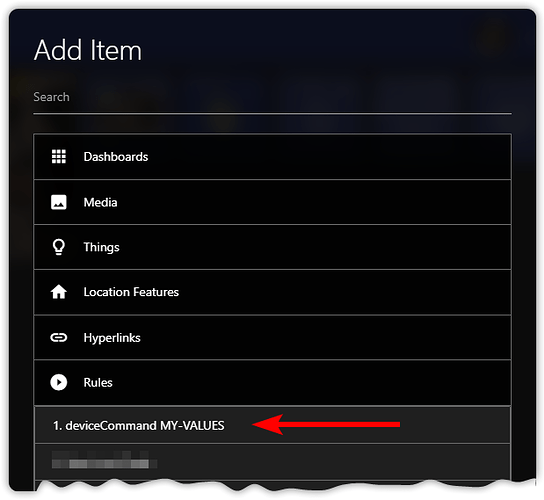 For the Denon Amp driver, I imagine you might even be able to set the volume to a specific value/level. If so, you could potentially even use a numeric variable on your dashboard and then use that numeric variable changing as the trigger for your rule and as a parameter in the device command in the flow.

Thanks for the speedy reply and I will try the rule within sharptools, You have mentioned that before in other posts people have raised this issue in before. It is an effective work around but much like you mentioned it seems HE folks (myself included) are using the button as more of an actuator then a contact sensor. I am not sure if Sharptools can employ the features that the virtual button in HE gives. A question, how does Sharptools utilize a zigbee button? not sure of the use of one via a dashboard but, give a man a rock and he will use it in ways you never dreamed of.

A question, how does Sharptools utilize a zigbee button?

Hubitat buttons can be authorized to SharpTools and used to trigger SharpTools rules. Historically, buttons were considered sensor devices within Hubitat – meaning they only reported their state when a button was physically actuated.

And when I mention ‘Historically’ above, I mean the original ‘Button’ and ‘PushableButton’ capabilities literally did not have commands as part of the specification at all.

And I wanted to post a copy of an alternative approach from our PMs for anyone else who finds this thread: (Please still feel free to cast a vote for Virtual Button support too!)

I forgot to mention in the other threads that we also support the Momentary capability from Hubitat.

There’s a “Virtual Momentary” device type in Hubitat which implements the Momentary (and Switch) capabilities and could be used with the Momentary Tile layout .

My apologies! It totally slipped my mind that this was a better option and would act more like a button for you (once you change it to the Momentary Tile Layout).

I put together a Virtual Momentary Switch driver that is a Switch, Momentary, and Button. That probably provides the best compatibility between Rule Machine and SharpTools for a ‘button’ type of functionality.