I’m using SharpTools on Android Moto Z2 Force. It runs Android 8.0.0. It shows SharpTools as Version 3.9 (81). When I add widgets to toggle modes or activate automations, they are named properly at the start. But then after some time (not sure what is the pattern here) they revert to “Toggle Thing”. This is happening for either type of widget.

I have Refresh on Start, Auto Refresh, and Foreground Service all turned off right now. Also I turned off “Background updates” for widgets. I don’t really need the widgets to show me a state of the thing. I just use them to do things like set lites for movie routines, or set the “mode” for the house.

Anyone else see this? Any ideas what I should do to try to fix or send debug info?

Thanks for reporting this and sorry that things aren’t working as expected. Is this only for a particlular type of widget? You mentioned toggling modes or activating automations - is this with the blue shortcuts which directly control modes and widgets? (As opposed to the yellow/gray widgets that display state and control A Thing)

Thanks for the fast reply! Hard for me to say, I’ve only used the blue type widgets for controlling one automation, and controlling setting of a mode one way and then back to the other. All widgets work well, just the name under them is changing back to generic.

Hard for me to say

Next time the issue occurs, if you could keep note of which type of widget it is, that would help me track down what might be going on. In the meantime, I’ll see if I can reproduce the issue.

The blue widgets are actually considered ‘Shortcuts’ in Android. SharpTools passes over a name, icon, and action… and the Android Homescreen is responsible for managing the shortcut from there on out.

The gray/yellow widgets are traditional Android widgets and SharpTools has more responsibility for managing their lifecycle including managing the name, display, values, actions, etc over the life of the widget.

Sorry if I wasn’t clear. It’s definitely happening on blue. Here is a photo: 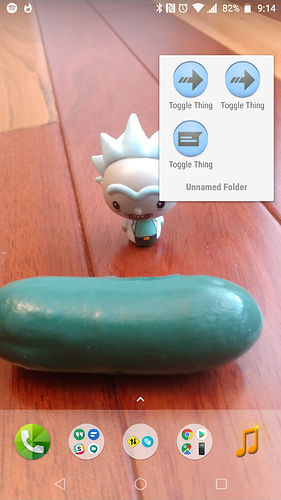 Justin-
Thanks for the follow-up. I have not been able to reproduce this. As noted in the post above, the blue widgets are actually shortcuts. SharpTools sends over the label, icon, and action and then the homescreen/launcher is responsible for displaying and managing these.

It’s almost like the homescreen is losing the label and is defaulting the label back to the internal activity name.

Motorola is usually pretty good about keeping their Android builds relatively close to stock, but it’s possible there’s something weird going on with this particular launcher. Just to confirm, are you using the stock launcher/homescreen? There are several alternatives like Nova Launcher and even Google’s Pixel Launcher which might be good alternatives to test if the stock Motorola launcher is causing the issues.