What tablet/device are you using for dashboards?

Hi, could you please share what kind device and size do you have?

I do not know if is good to use as Dashboard, I am looking for a recommendation, I have my home automation devices and 6 cameras to show on my Dashboard.

The most popular devices seem to be the Amazon Fire tablets, Apple iPad, and Samsung Galaxy Tab series of tablets.

Personally, I use Fire HD 8 and Fire HD 10 devices for my dedicated tablets along with Fully Kiosk Browser which has some nice features for motion detection, screensavers, etc.

Side note: From my experience, the Fire HD 7 tends to be underpowered, so I would stick with at least a Fire HD 8 if you go with an Amazon device. The bigger devices tend to have better specs and are more powerful.

Here’s a few photos of my old setup (nearly a year ago - I need to snap some new photos!): 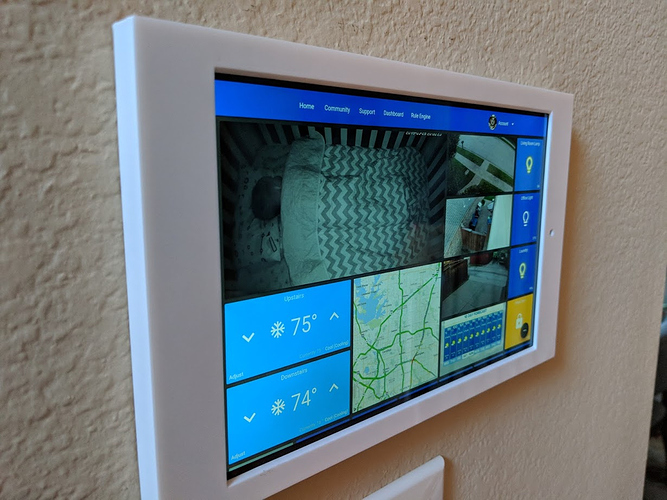 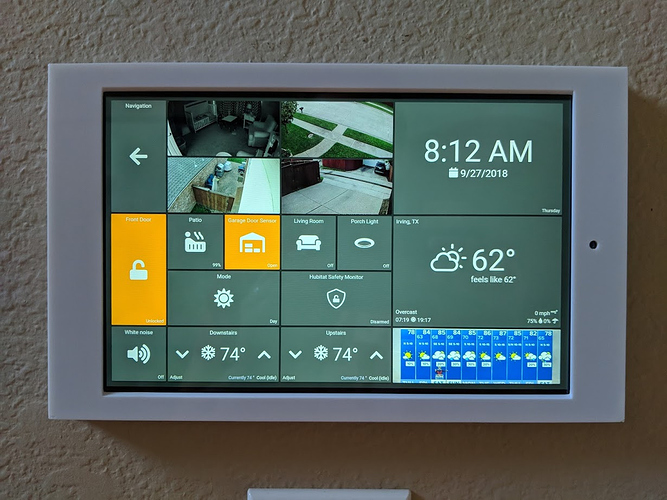 And I use SharpTools dashboards on my Pixel 2 XL phone using the Add To Homescreen approach.

)
Have the 8" one in the office, and am thinking getting another 10" one so I can mount it in the kitchen. 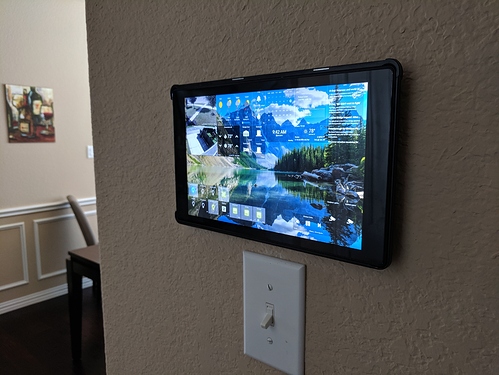 I agreed that the 10" one works better for me for the size and performance, and is probably the most cost efficient tablet with good quality overall. I had the 10" one mounted and running 24/7 for 1.5 years without any issue.

I came to the site today to ask a question related to this.

The dashboard I would like to keep alive 24/7 is an iPad mini on our bedroom dresser. I’m having no luck in having it display a dashboard for more than a day or two before it “drops out” of the app. I’ve tried every browser that I can find - and they all end up doing the same thing. The browser I like best is “Kiosk mode for iPad” because it allows the app to occupy the entire screen. Dolphin is second choice, but it places small icons in both of the top corners. I’ve used the browsers both with and without the iPad’s “guided access” feature.

Being very up-in-years, I had hoped that the dashboards would survive me and prove useful for the household after I’m gone, but it doesn’t look possible. My wife just won’t try to keep it going.

Any ideas on what’s causing this situation - and what can be done to ameliorate it?

Interesting, I will look into this and let you know what I can find.

Great looking dashboards and info. What would be a recommended tablet for a wall mounted tablet? I have an Ipad mini, but every time I open Sharptools I have to login and the layout is much different than my computer I do like the mulitple dashboards mentioned just for the Ipad. . The wife will never go for this

Hey @Herb_Michelli-
I hope you don’t mind that I’ve moved your post from the Show off Your Dashboards thread into another related thread about which tablets people are using… if you scroll up a bit in the thread, you’ll find some relevant feedback!

The most popular tablets tend to be Amazon Fire Tablets, Apple iPads, and Samsung Galaxy Tabs (in rough order). Though any device with a modern web browser should work fine.

I think the Amazon Fire tablets are probably so popular based on being a good ‘bang for the buck’. They’re relatively low cost devices and have decent performance. There are definitely much more powerful devices out there though not at as good of a price. The Fire Tablets also have a decent number of options available for wall mounts on Etsy, Amazon, etc.

There’s also some neat apps like Fully Kiosk Browser which make it easy to wake the tablet on motion, set a screensaver, etc. Note that there are some limitations to the Fire tablets. For example, they cannot be automatically unlocked which means that you can’t let Fully Kiosk Browser let them go completely to sleep - the workaround most people use is to dim the screen as far as it will go on a black screensaver. (Normal Android tablets don’t typically have these same limitations)

While there isn’t a single stand-out “Kiosk” app that people use for iPads, it seems like a lot of people are happy with the Add to Homescreen approach.

As you noted, some of the older generation iPads might have some quirks. (The same really applies to older tablets of any sort which is why we generally recommend using a newer model tablet if you can - the newer models tend to be most performant and have support for the latest web standards)

The Samsung Galaxy Tabs share much in common with the Fire tablets in that they have access to the same apps like Fully Kiosk Browser which enable wake-on-motion and screensaver functionality.

The big difference is that Galaxy Tabs tend to be a bit more expensive than the Fire tablet counterparts… though their higher end models may be worth the premium as you get a more powerful device with a better quality screen.

Beyond that, I’d really leave it up to the community for their recommendations and experience. We’ve seen the community using a variety of other devices from RCA tablets that are occasionally on sale at Walmart to purpose-built in-wall tablets and more.

what about mounting hardware ? What are people using ?

For iPad, I have seem some users posted some really nice mounts from iWallDock and iPort.

The iPort Launch also allows you to undock from wall mount and turn it into a table top or vice versa, which is pretty cool.

Curious on the best ways to run power to these wall mounted devices. Is it hooking into a switch that’s close by?

yes, I wired from the switch below the tablet. Added an outlet with USB port and recessed mount behind the tablet. See photo from the post below.

So I’m looking into getting a couple tablets to setup 2 dashboard terminals in our new house. I’m leaning towards the fire hd 10. I see the current generation is 10 and I am wondering what generation fire hd 10 people on here are using? I have found some 7th for a reasonable price. Please give me your thoughts/suggestions.

I have been using 7th Fire HD 10" for the past couple years and it has been running fine. But I’d generally suggest the newer model for better performance.

@James I’ve been look at how to disable the lock on them. Lots of info some people say it works some says it doesn’t. What I’m hoping for is to achieve screen until motion detected for the dashboard going in the master bedroom. To your knowledge is there a better workaround?

Yes, I use Fully Kiosk Browser and use its Screensaver feature to dim the screen to lowest, and enable the Visual Motion Detection to wake the screen up. (Motion detection from the tablet’s camera.) So every time when somebody walks by it will turn the screen on. This is a very common approach for people using Fully Kiosk.

My only concern is the little bit of light emitted from the screen at night with this going in the master bedroom. I was hoping for a full screen off.

The Fire Tablets will emit some level of light even when dimmed to the lowest setting. Probably fine for something like a hallway, but some people might find it distracting in a bedroom.

You might consider a traditional Android tablet if you want the screen to go completely off and the device to be able to wake (directly to your dashboard) when motion is detected. Samsung tablets are popular alternatives, but there’s a variety of other Android tablets out there that people have had luck with.

Let us know what device you end up going with and how you like it!

Any advice on this tablet?

I would prefer a purpose-built tablet using a raspberry pi and a large 24” touchscreen. But I also want to be able to dynamically switch dashboards based on hub events, and I think that might require Fully Kiosk Browser app? Is there any way to run that app on a raspberry pi?

I´m thinking about use a Rasberry Pi with an old monitor(22"). I won´t have the touch screen function, but will be a large screen to use just to monitoring the status.
I´ll, probably use it in the corner of my man cave counter.