Please welcome James Liu (@James) to the SharpTools team! James and I have worked together in the industrial IoT space for the past 10+ years and I’m excited to see what we will accomplish in the home automation space. James has been working on a secret project which we are excited to announce as a limited beta release:

Announcing the SharpTools Rule Engine! Automate your smart home and get your devices talking to each other. Rule Engine is a powerful and intuitive automation tool to create activity flows to control your devices based on IF-THEN logic, device triggers, and timer triggers. It enables capabilities that where once relegated to the realm of programmers. Request access to the Rule Engine at: https://sharptools.io/rule/#/beta We are currently rolling out the Rule Engine as a private beta and are p…

As we looked at the Smart Home market and the potential to better integrate devices across platforms, we decided we needed to do something about it. As such, we decided to join forces and build the next generation of SharpTools – a complete home automation platform including a single interface to view, control, and automate your devices.

SharpTools.io is the next generation of SharpTools and we envision building out support for visualizing and automating interactions with your devices from a single central platform. Our immediate focus will remain on building out dashboard and rule automation features using SmartThings as a central platform, but on our shortlist is expansion to support other platforms like Hubitat, Philips Hue, etc.

The end result being that you can use the dashboard as a single pane of glass to view and control devices across various home automation platforms (and apps). And the Rule Engine enables cross platform automation allowing you to trigger actions across traditional ‘app boundaries’. 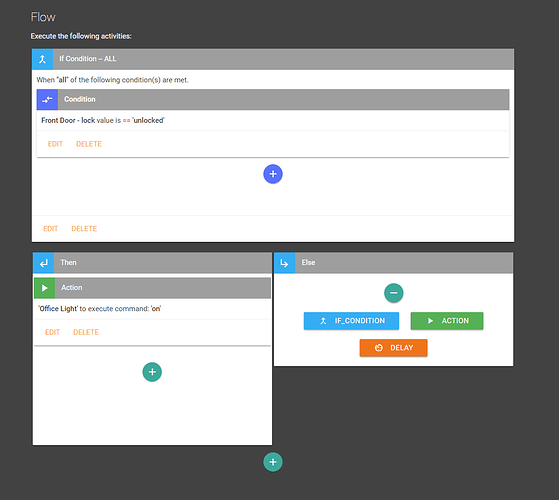 Congratulations, Josh. Looks exciting and I await beta approval and more info. One concern/question: Your announcement references Hubitat, which for me is a good thing, but I wonder if that means integration of basic SharpTools with Hubitat is delayed until it becomes a part of the new Rule Engine?

Thanks Charles! The initial integration of Hubitat will run through SharpTools.io but that doesn’t necessarily mean that it has to be be part of Rule Engine first. That being said, there has been a lot of work behind the scenes to restructure SharpTools.io to support multiple home automation platforms and still work to be done. Thanks for your patience - I think the end results will be worth the wait!