I am hoping to implement Rboy’s Intruder Alert (IA) SmartApp as my home security system (as opposed to STHM). I have it installed and understand how to configure it in the ST’s (new) app. I am generally familiar with Virtual Switches.

Has anyone set up virtual switches to “Arm” or “Disarm” the IA Smartapp (so those switches can be exposed/used in a SharpTool’s dashboard?

I will check that Smart App…!!! thanks

I was thinking of you @Carlos_Juarez!

Someone in the community uses this integration, but I couldn’t remember if it was you, so I was just looking through the RBoy Intruder Alert thread over in the SmartThings community (and still couldn’t figure out who it is).

@Casey_Stanley from a quick look at the RBoy Security System thread, it looks like you can use switches (virtual or not) to arm/disarm it, so I don’t see any reason why you wouldn’t be able to authorize that switch to SharpTools.

Thank you for responding. Where I am hung up is what the logic would be (likely related to my lack of experience!). I assume I set up an Automation that triggers when the switches state is wither “on” or “off”, but I am unsure how to Arm (turn on) or Disarm (Turn off) the IA smartapp. The “Then” logic that would trigger by the virtual switches state doesn’t let you turn on or off smart apps does it?

This is how I posed the question the Smartthings Community (to which I haven’t seen a response yet) . . . "this is a (very) basic question I am guessing (sorry): I have created virtual switches in smartthings so as to be able to Arm (home and away) and Disarm the IA smartapp. In the Automation logic (for instance “if the virtual switch is ‘on’), what’s the “Then” logic to turn on or off the IA smartapp? I a missing how/what to do in the automation rule to get the App to turn on or off.”

I haven’t used the IA app, so I’m not sure, but reading through the description of the key features, it reads as if you should be able to use a virtual switch to arm it. I assumed that would have been somewhere directly within the IA SmartApp.

Ramit and Maddie are usually pretty quick to respond, so let’s see what they say.

Yeeaah !..Thats could work, until now, the only Smart App I know that could handle ADT Panel is ADT Tools 2, arming/disarming it with virtual buttons, but also linking it with SHM, so now my dashboards are using SHM to handle the panel, since virtual buttons from the app started failed and been unstable (seems since SHM internal access changes…for some reason).

I read in the Thread that this Smart App Key Features include Arm/Disarm with “Hub Modes”, but I think its about only for Smartthings Hubs, lets see what happen…

The main issue here is New App, does not consider ADT Panel modes neither in automations, neither for scenes…etc. So if SHM disappears, ADT Tools will lose linking, then ADT Panel will have to be handled only with manual Touching of the panel and with the New App ADT Dashboard…that is ugly as hell, and no automations at all… I will struggle until the final because I think ADT/ST its a great hub, locally alarm with local signal for security devices, solid as a rock, but It has been almost forgotten… 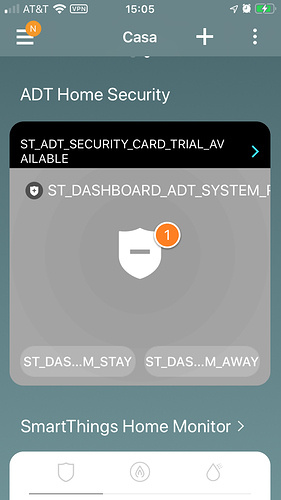 Hi Casey, I will check the Smart App, but could start thinking about you have to have 3 buttons, one for each alarm function:

Then if you switch on Disarm button the alarm is disarmed, if you switch on Arm Stay button alarm is armed in stay mode…same for away. The way to do it is create “Momentary Buttons”, that means when you push the button …it triggers an action, but it goes back to off state. At least thats the way I have been handle ADT/Tools 2 that link SHM with ADT Panel…seems could be the same logical. In IDE yo can create a “Momentary Button” device, also Sharp Tools community have published a DTH to create Momentaries Buttons…Hoping Im helping …

Thank you, @Carlos_Juarez. You are helping.

I am pursuing what you describe (three switches (arm/stay, arm/away, and disarm). What I am missing is how to actually turn the Rboy smart app on and off from automation. Hopefully someone from Rboy will be able to help. I will let you know what I find.

It seems, you have to setup the RBoy Smart App to be triggered with virtual switches, then set automates in the New App that triggers ON those switches.