Hi @josh
I’ve got to say I love your web dashboard I didn’t even realise you’d designed one and I’ve been using your pro sharptools android app for a while now.
I’ve read on your main page about pairing with a Tv!
But I’m not sure on the process of setting it up and can’t see any info about it.
What is it actually for? And is my Tv a compatible one , it’s a Sony Android tv.
Thanks for any info.

Ha ha I’m a idiot I’ve just seen it on the play store on my Tv going to have a look now.

Back again lol
Doesn’t seem to want to pair.
I added the pairing code displayed on screen and selected my location on the next screen but then I got a error message.
So I tried again just selecting 1 device this time a official ST device but still the same? 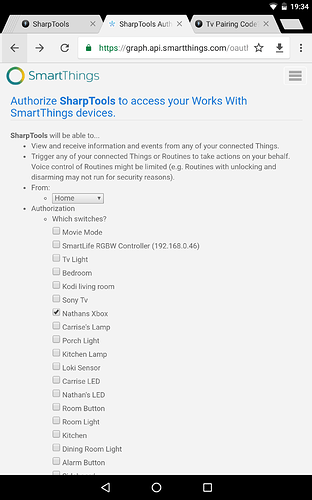 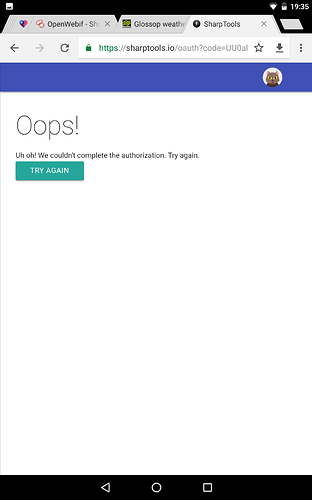 Hm… it’s possible I broke something with TV pairing as I’ve completely revamped the pairing system relatively recently. Let me do a bit of checking…

@Steven_loveday yeah, it looks like I may have broken something on my side as I am able to reproduce the issue. Let me track it down and see if I can resolve it.

Cheers yeah I’m in no rush

I found the issue. Working on a fix now.

Edit: I’ve fixed the issue in my local development instance. I’ll push it out along with a few other changes likely next week.

I included a fix with the release tonight. I haven’t had a chance to test with an actual TV, but I ran through the process manually and the logs all looked fine.

Thanks yeah that’s gone through fine now.
Trying to work out what things I can do with it now.
Looks great cheers

At some point I’ll probably just merge in some of the web dashboard features into the TV app as the dashboard is more feature filled and prettier in my opinion.

Behind the scenes, the TV app is basically just the mobile app with a TV skin on it. Some people have even installed Tasker on their TVs and use it along with the SharpTools Tasker plugins.

You can use the following approach to open the phone version of SharpTools on a TV which is helpful if you need to set up subscriptions for the Tasker integration.

How do I launch the normal SharpTools interface on Android TV?

If you are using an Android TV box which has support for Google Play Services and want to use the Tasker integration, you can instruct Tasker to launch the phone/tablet version of SharpTools by using the following instructions. This approach is not...

Thanks sound good.
I’ve been thinking because I have a android TV , I was wondering whether it’s possible if there’s movement from a camera that a pop up could come on screen as a overlay but I’m guessing android on TVs don’t work the same way as phone’s/tablets.

I’m not sure. On some of the older Android boxes, you could use things like TinyCam to open an overlay (the boxes that were just running the phone OS and not the TV variant). On Android TV, I think TinyCam uses the new picture-in-picture API which is a bit more limited for playback of multiple media streams at once.

Thanks yeah I’ll look into that.