Has anyone used this in conjunction with a smart display such as the Google Home Hub or Lenovo Smart Display? If so, I would like to see what you think about the experience and if you have any photos or videos of it being used.

I’d be curious as well. As far as I’m aware, the Google smart displays aren’t shipping with a browser at the moment, so you’d have to come up with some other creative way to display a dashboard.

That being said, plenty of people are using tablets like Google smart displays using Fully Kiosk Browser to keep a pretty screen on all the time (eg. photos/calendar/dakboard) and show their dashboard on motion. Some people choose to keep the tablet’s built-in assistant enabled and the device effectively becomes a voice controlled smart display.

On a related note, there was an example of a user running SharpTools on their Amazon Echo Show.

Running on a Amazon Echo Show: 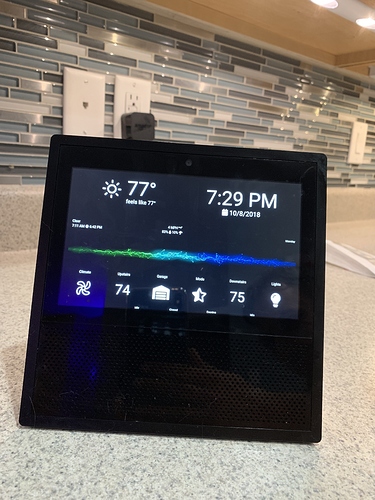 From what I understand, you have to ask Alexa to bring up the browser and she will go back to ‘show’ mode if you don’t interact with her for a while.

PS. That post has some other cool photos of people using the dashboard on cool devices:

Those are some cool setups. I really just need to get a decent used tablet and get it up and running. I just the like the idea of the Google Home Hub but not sure about its size and I really like the layout of Sharptools over the Google Home layout.

You can pick up the Amazon Fire HD 10’s for $99 when they go on sale. They’ve got Alexa built into them and make for great dedicated dashboard displays.

I had to turn the Alexa voice control off on my Fire HD 10 as I already had other Amazon Echos nearby and the tablet was hearing me better than the Echo! That being said, some of the cheap Android tablets with Google Assistant built-in are hit-or-miss on the quality of the microphones, so that’s something to keep in mind if talking to the voice assistant from a distance is important to you.

I will have to look into something Google based as I am in deep with Google Assistant.

@James didn’t you try one of the Lenovo tablets with Google Assistant? I vaguely recall you having some trouble with the microphone, but I can’t remember if it was because of the case it was in.

Yeah, I had Lenovo Tab 4 10.1" because it is probably cheapest 10" tablet with Google Assistant, but Google Assistant on it is just not practically due to the poor microphone. I had to yell right in front the tablet so it listens. I returned it before my wife gets mad about me yelling all the time.