Rules execution — Am I naive?

I hope the answer is yes, because I really like the sharptools rules engine.

But though just a newbie, it seems to be that rule execution speed via the sharptools rules engine is painfully slow compared to executing the same steps using a rule in SmartThings.

Can someone tell me what I’m overlooking?

Hi @Kevin_M_Speer, welcome to the community. Can you provide some context about your rule setup so we can better understand what and why it is slow for you?

Sorry that it’s taken me so long to respond! Below are screen shots of the entire rule.

Does anything jump out that I could improve on?

Thanks so much for your quick reply and support!

Edit: getting an error telling me that since I’m a new user I can only attach one file at a time.

@Kevin_M_Speer, thanks for the screenshots. I don’t see any immediate issue in your rule setup. Can you take a look of the Rule Execution log and post the log here so I can have a better idea about its execution performance. You can find the Rule Log from ... menu at right-top when editing the rule. (As well as the rule screenshot feature too, which screenshots the whole rule setup in one image.)

Oh great tip for getting the whole rule!

As for the logs, I’m attaching a screenshot but please let me know if I haven’t included what you’d like to see…

Sorry I didn’t clarify clearly that I’d like to see the timestamps of the trigger event and the light turning on action to have a better idea how big of the delay it is.

Detailed timestamp in each step: 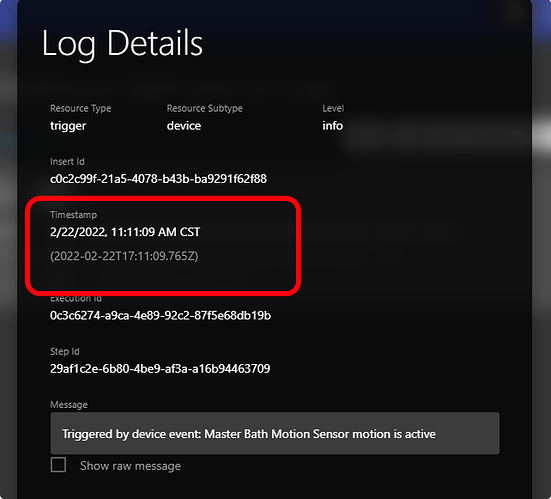 Maybe you didn’t clarify because it should’ve been obvious

The time stamps suggest the rule is executing pretty fast, but I wonder if that’s because it doesn’t represent any time window smaller than a whole second? There is definitely a noticeable delay in the lights coming on… wonder if it’s related to speed of the light control or motion sensor?

@Kevin_M_Speer, it seems the rule triggering and condition checking was pretty fast for this rule execution, but I did notice that the device command (setLevel) seemed to take longer than expected (~2 seconds, instead of < 1 second)

Can you check other rule(s) if this command latency can be observed in the rule log for other devices and commands as well?

Attaching the time stamps on another “set level” rule that is triggered by a common motion sensor and which then sends a set level command to two devices: a wifi bulb (garage entry light) and a Zooz in-wall dimmer. I’m starting to suspect it’s the Zooz switches. Have you heard of these devices being slow? There must be some reason why they are so inexpensive…

@Kevin_M_Speer, my zooz zwave switch responses pretty fast in my setup. (<1 second) So I don’t think it’s device specific issue, however have you tried turn it on/off through the SmartThings app and if the latency can be observed? 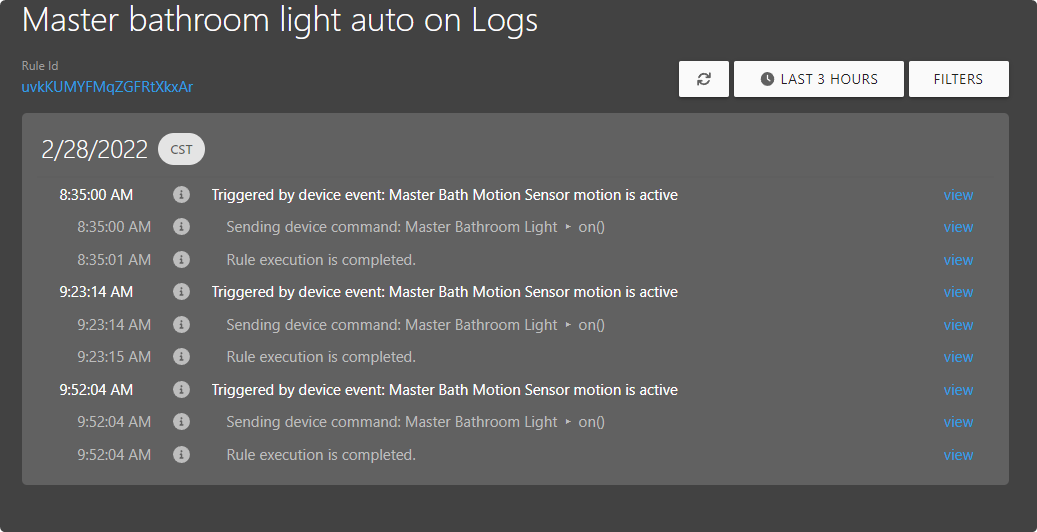 Yes! You were right. I opened the ST app and observed the same latency.

Forgive me as I’m not yet knowledgeable, but I presume this means it has zero to do with Sharptools and everything to do with something between that switch and the hub. Any ideas how I might resolve?

@Kevin_M_Speer, I wish I have a more direct answer for you, but unfortunately there can be several reasons causing this. You may try to repair zwave network or adding the zwave repeater to see if it helps. See the discussion below for more details.

Slow Zwave, and getting slower

We recently moved into a new house and everything has been running fine except we have the slowest zwave response time in the years we’ve been using SmartThings. Only zwave devices respond slowly and they take up to one minute to respond from the...

The other thing to consider is that these are cloud executions. The SharpTools rule engine for sure, and also with ST natively, as you are probably using Zooz’s DH. Unfortunately with cloud executions, a bit of latency is the norm.