Rule based on dates

and a separate one on Wednesday/Thursday once a month

Similarly, do you always want this to be the first Wed/Thur of the month?

Hopefully this may be clearer, I want to trigger a rule on a wed/Thur and then 2 weeks later on wed/Thur and so on, throughout the year.

Ah, OK. So more like an every two weeks thing. So this month, for example, if it had triggered in the first week, it could possibly trigger 3 Wednesdays in the month?

I just pushed an update to the /date endpoint on the Lab environment to provide a week number (w) and ISO week number (W) as part of the response.

The idea being that you could run the rule every Wed/Thursday and then have it check to see if it’s currently an even week. The way we do this is to retrieve the current week number from the /date endpoint and then pass it to a simple formula via the /math endpoint (where we determine it’s an even week if it’s perfectly divisible by two): 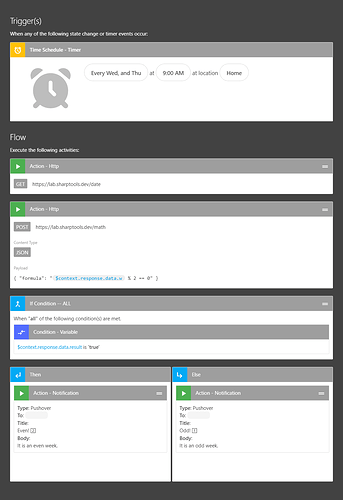 (We’d like to build math and date as first-class features within the Rule Engine, but hopefully this covers your need for now!)

Thanks, I’ll give it ago, last question what’s the maximum amount of seconds, that you can set a delay in rule’s

It’s on the order of days, but when you get to that big of a delay, there’s often other approaches that would work better.