A while ago, I switched from APIXU to WX-APIXU on Hubitat for my Weather, because the developer made a pretty compelling case that it was a more efficient version that would be much kinder on computer and network usage than the original. Everything seems basically the same, except my Sharptools weather tiles no longer show the current conditions icon. They just say N/A in its place. 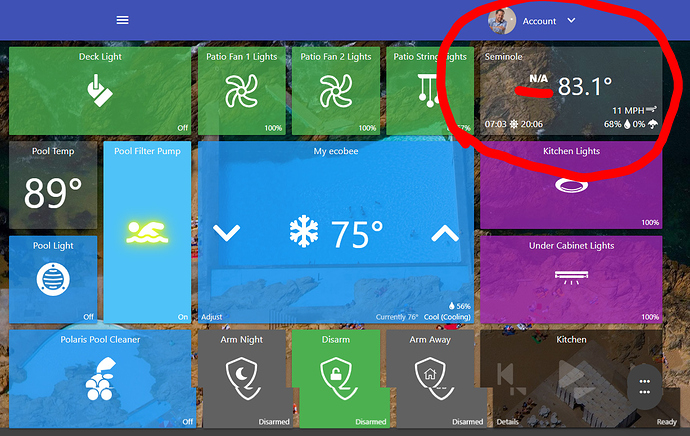 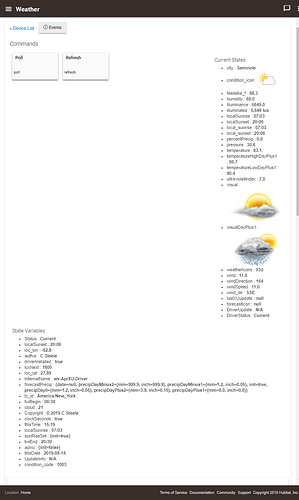 So…not sure if there’s a setting I can change or something someone might see amiss with this particular driver? Or perhaps there’s a better way to get weather in SharpTools? I odn’t really use it much in Hubitat, I just have it there for the dashboards.

… And by the way, the Hubitat dashboards show the icon fine, for whatever that may be worth:

It looks like the forecastIcon is being reported as null which is why SharpTools is falling back to displaying N/A.

The SharpTools weather tile looks for either a weatherIcon or forecastIcon attribute to determine which icon to show.

The main thing the Weather Tile is looking for is the device to implement a weather attribute. That triggers the weather tile being rendered instead of a generic thing tile. It’s looking for a few key attributes: weather - description of the weather/forecast [required] weatherIcon - reports a Weather Underground or TWC compatible icon id forecastIcon - should report a Weather Underground compatible icon name The weather tile falls back to this attribute if the weatherIcon is not available …

I’m away from my PC and Hub today, but I can take a closer look at the driver and see if I can figure out what’s going on when I get back. The driver probably just needs a tweak to report that attribute properly.

Got you. Thanks for the look. There are tons of settings that can be turned on in the driver, and I think that’s one of them. I think that because I’ve turned it on before trying to sort this out on my own, but it didn’t change anything at the time. Then again, I’m not sure weather was updating at all in Sharptools at that time… The weather in Florida this time of year is exactly the same every day. Hot as hell with biblical rain.

That said, I updated the driver to the latest version today, and I think it reset those prefs, so I’ll take a look and see if I can at least get that field to report something other than null. At least now I know what I’m looking for.

Unfortunately, I already had that preference turned on. No dice. I’ve posted about it on the wx-apixu thread at HE. We’ll see if it gets any traction over there. I compared some lines in Bangali’s driver with the wx- version, and there are a couple of differences when it comes to mentions of that call…but beyond that, I’m not really qualified to troubleshoot it.

Thanks, as always, for your responsiveness, Josh.

Developer updated it to correct a typo. Thanks for your help in pinpointing where the trouble was!

Thanks for the update! Glad to hear we could get it all sorted out!

IMPORTANT: For anyone who has found this post through search, please note that the Hubitat community seems to be moving away from APIXU after they rebranded to ‘Weatherstack’ and reduced their free tier.

The Hubitat Community DarkSky.net driver is becoming a popular weather driver for Hubitat.