Q: How do I "push" an attribute of a device handler?

How do I do that in SharpTools?
Do I use a Hero layout and just show one attribute?
Do I use it like a switch, to send a “push” to Hubitat?

Thanks for posting, Jack! Am I understanding correctly that the ‘virtual buttons’ are child devices that implement the ‘Momentary’ capability and thus have push() commands on them?

PS. Some button / momentary devices also act like a switch that automatically turns itself off. If that’s the case with your device, then you could just add the switch directly to your dashboard.

We plan on adding a dedicated tile for ‘Momentary’ devices, but in the meantime the best way is to create a rule in the SharpTools Rule Engine which has a single action of push() for your desired device.

Then you can add that rule directly to your dashboard as a tile and it will send the push() command when you press it. 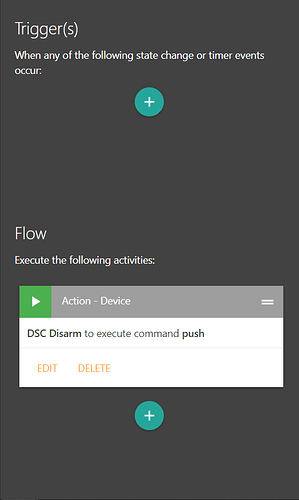