For what it’s worth, I was able to get Pushbullet working on a Fire HD 8 (10th generation), but the same thing happened with Pushover for me where it let me sign in, but then failed to register the device.

As noted in my reply to your comment in the other post, since this is a Amazon Fire Tablet, if you’re using Fully Kiosk Browser to display a dashboard, you can also use that to play sounds on the tablet.

I was able to get pushbullet via Chrome web browser. Some issues with this is that in the rule I selected test action and I did get the notification on the tablet, but this only works for a short while then seems to crash with “error in database transaction while inserting message”. you’ll need to resign in via the web and it will work again,but still only doe a short while

Pushbullet seems to work fine for me in my limited testing. I’m using the Pushbullet app installed directly from Google Play store. Not sure what you mean by getting Pushbullet via Chrome web browser though?

That being said, I’m using a new model Fire HD 8 (10th generation) with the Fire Toolbox. Historically, we have recommended against trying to sideload Google Play on older model Fire 7 and Fire HD 8 devices as it caused more troubles than it was worth (including slowing the device down and causing performance issues). Unfortunately, with Google Play not being officially supported on Fire Tablets, you’re unlikely to find support direct from the app developers.

That being said, Fully Kiosk Browser has a version designed specifically for Fire OS devices and people have successfully used that for various types of automations. (If you don’t need sideloaded Google Play for anything else though, I would generally recommend factory resetting the tablet to make sure you have a clean slate to start with)

Sorry I meant Pushover via web. I’m actually trying Pushbullet and see if i can us AutomatIt to trigger a sound notification

I haven’t tried it with AutomateIt, so I can’t speak to that side of things, but I use Pushbullet with Tasker (similar to AutomateIt) on other devices and it works great for the intended purpose.

As for the Fully Kiosk Browser I installed the device manager added the tablet into Smartthings but it doesn’t seem to be working either. Not sure if its due to the new app changes??

Cant seem to get either working. I installed Pushbullet and linked in Sharptools account. when I ad in a rule it asks doe the select receiver and nothing is in the drop down. I have given up on the Fully Kiosk control option as I’m using smarthtings. Not sure why this is giving such are hard time. I’ll im liking it to make a beep sound when the door opens. might just go by way of Zwave siren. I’m just being picky with the sounds I want to hear and how I want it to work.

I installed Pushbullet and linked in Sharptools account. when I ad in a rule it asks doe the select receiver and nothing is in the drop down 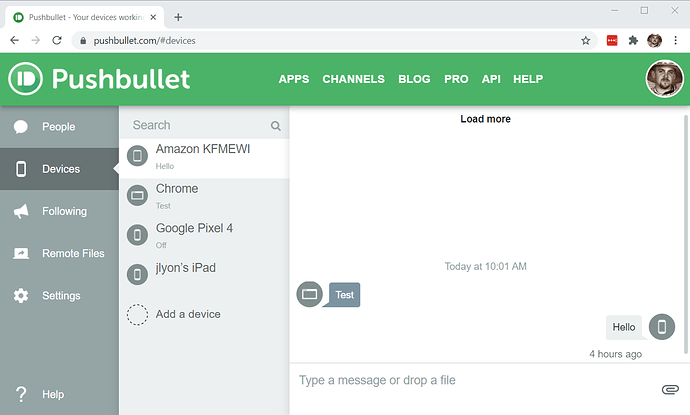 Hmm… I have it on my tablet but its not showing up as a device. I tested with the Chrome extension and I do see that as a device.??? cant test anything else as I have Iphone and did not see it on the app store

I was looking around online and trying the Tasker option. I have Tasker installed with the ThingState plug in. I also have the Sharptools app form the google play store. IN the Sharptools app I can long press on the thing and the subscribe options do pop up, but it will not subscribe to anything. Am i doing something wrong? Trying to see if i can get Tasker to send a notification on my tablets, but nothing seems to be working. Not sure if its due to the fireOS ver 7.3.1.2 that I’m using and that its not actuality Andriod OS technically??

Unfortunately, since the Fire tablet doesn’t natively ship with Google Play Store and the associated Google Play Services, it’s probably related to that.

Thanks that was my thought as I also have a FireHD 10 and its doing the same thing. Hmm… Might need to find another way. This would be so much of an issue if EchoSpeaks was still a thing.