On and off but dim too?

So if I have a button where I can press it, turns light on, then shows the icon color of light based on percentage of dimming. But then double press, hold button, or something to change the brightness? 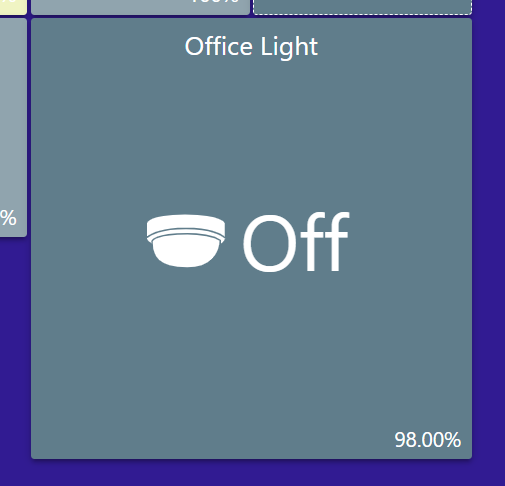 You can either tap the percentage in the bottom right corner of the tile or long-press on it to bring up the dimmer if it’s configured as a Switch Level Tile.

It looks like it’s configured as a Hero Attribute tile at the moment.

Thanks Josh - sorry if my question seemed like babble as it was late and a long day and I was trying to get my dashboards to a certain way.

The directions you provided were the path I went down, but was hoping that when I select the light on, and then change the dim level, that the graphic (animated) changes to represent that. Is that not possible?

Thanks for the additional details. Would you mind providing an example of a configuration you would want?

It sounds like you want something graphical to change according to the dim level… you mentioned animation though, so it wasn’t clear to me what you were referring to. My initial thought was you wanted to change which icon was displayed based on the dim level, but the ‘animation’ part is throwing me off.

I think Mark is looking for a dashboard capability like Hue dimmers have. Each button can respond to three events - single tap, double tap, long press. I have most of mine programmed as dim (single tap) bright (double tap) and off (long press). Would be a nice dashboard feature!

Yes, Stan is somewhat right. I guess for now, I was more or less interested in the opacity changing based the level of light. I know I called it animation, but was not sure what else to call it.

Opacity of the tile itself or you mean have the ‘glow’ on the tile reflect how dim or bright the light is?

The glow of the icon on the tile.