No more Routines... Any workaround?

Hi everybody… I use to have an automated task on my android phone that is no longer available since routines can’t be created anymore either in the classic or the modern/new app. ( I had to reset the hub and lost everything including my existing routines of course…) I was wondering if there is something else i could do to accomplish the same tasks… Thanks in advance !

Welcome to the community and thanks for posting!

You could create a Virtual Switch and then use that to trigger either a Custom Automation or a Scene in the ‘new’ Samsung SmartThings app.

Then in SharpTools, you would flip the Virtual Switch on whenever you want to run your Custom Automation / Scene.

Well… now another problem arrived… I use to easily trigger routines and other actions from the ST app itself or Webcore… now i’m stuck since since the app(s) don’t provide me with that option anymore and webcore can only trigger a routine? Now what ?

@Luciano_T thanks for the update. I’m not sure I follow though… WebCoRE can control a Virtual Switch (or have Pistons triggered by one). Make sure you’ve updated your WebCoRE authorizations so it has access to the newly created switch though!

ok, here is the thing… Sharptools turns the virtual switch on though i can’t keep the process going as i don’t have an option to trigger the scenes… I can’t find the option in the app ( as i used to )and webcore only executes routines right? I’m stuck ;-(

Webcore can do many things. You don’t say what you’re trying to do in your scene, but you can most likely reproduce what was accomplished by the scene within webCore. I you describe the scene we can maybe provide some insight.

You can use a Custom Automation in the new Samsung SmartThings app to create an automation that is triggered IF the virtual switch is turned on THEN run the desired scene. 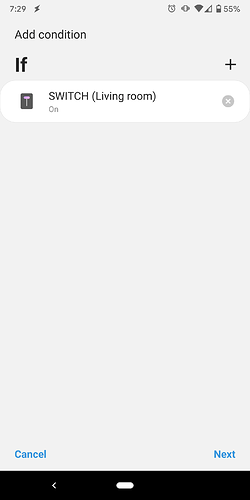 and webcore only executes routines right?

WebCoRE can flip the same virtual switch on which you use in the custom automation noted above to run your scene.

Thanks for your help Bry ! It seems like Josh got it on the right track

Am I missing something? I just created a routine in the classic app without any issues?

As long as you still have the Routines tab available in the SmartThings Classic app, you can create new Routines.

Some users have found that if they delete all Routines, then the tab disappears and there’s no way to get it back (unless you reach out to SmartThings support and request they add it back).

Similarly, SmartThings has started prompting some users with a banner in the Classic app that runs a transition/migration to equivalent ‘new’ app features. Among these migrations is a conversion from Routines to Scenes. It’s a one-way migration and Routine functionality gets removed as part of the migration.

SmartThings recently announced that they will begin asking users to transition from the SmartThings Classic app to the ‘new’ Samsung SmartThings mobile app. Important: The migration tool noted below will remove some functionality that you may be accustomed to using in SharpTools. You can use both apps side-by-side, but completing the migration will impact functionality related to Routines and SHM. See below for more details. As part of this migration, they are including a migration tool in t…