I am new to sharptools and am trying to work out how to best use this with my smartthings ecosystem. I have only installed sharptools and added a widget to control a light successfully. I try to add another widget, but the message I get is widget added and it adds no further widget. I assume there is a limitation with the sharp tools widget to allow only one of any type to be added? Or could this be a limitation of the ColorOS 6 I have on the phone? Or do I need tasker and then use this to create multiple task apps that I customise?

Thanks in advance for the assistance.

Thanks for the message and sorry to hear that things aren’t working as expected.

SharpTools doesn’t impose any limits on the number of widgets that are created or added. Usually, if you are able to add at least one widget, then I wouldn’t expect the OS to restrict any further additions, but I suppose it’s possible!

What type of widget did you add to your homescreen? One of the blue widgets or the yellow/gray ones? You might try the other type to see if that helps. (eg. if you were using yellow/gray, try the blue ones). The blue ones are technically Android Shortcuts which are a bit simpler from the OS’s perspective.

As you mentioned Tasker is definitely an option for creating custom widgets / shortcuts. Here are some details on how to create custom widgets that take an action of your choice and can display state:

In this tutorial, we will show how to use SharpTools and Tasker to create a custom widget that displays Thing state in Android. If you are looking for a quick and easy way to control your Things without Tasker and without showing the current state,...

Thanks for the quick response. I can’t see the blue grey shortcut from the widget menu kn the phone. just the yellow grey one. i tried the attribute widget and this also allows only one.
I have also received a response from Oppo and it seems that the ColorOS that it installed has a limit of one widget per app. they would note for feedback. Do you think that custom widgets via Tasker would avoid this limit?

thanks for the help.

Thanks for the update. That’s really interesting (and odd!) that the OS is limiting the number of widgets per app.

Tasker may help you work around it by being able to add one more widget, but it sounds like it will still be limited by the number of widgets per app that the phone is restricting.

Regarding the blue Shortcuts, since they’re technically not ‘Widgets’ they might be listed somewhere else under your phone’s homescreen customization options. In vanilla Android (straight from Google), the options look like: 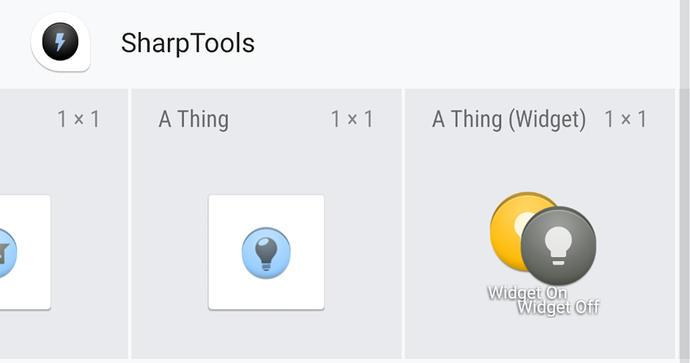 And since the blue version are technically Shortcuts (rather than Widgets), perhaps your phone’s OS won’t restrict them the same way.

One other workaround, if it comes to it, would be to use Tasker along with another custom widget app to create one large widget with multiple actions in it. It would be a bit of effort, but it sounds like that could work go get around the phone’s limitations.

Alternatively, take a look at the SharpTools.io dashboard. I have it pinned to my homescreen and it’s the primary way I quickly control my home now.