Is there anyway to stop the interface getting narrower as I go ? 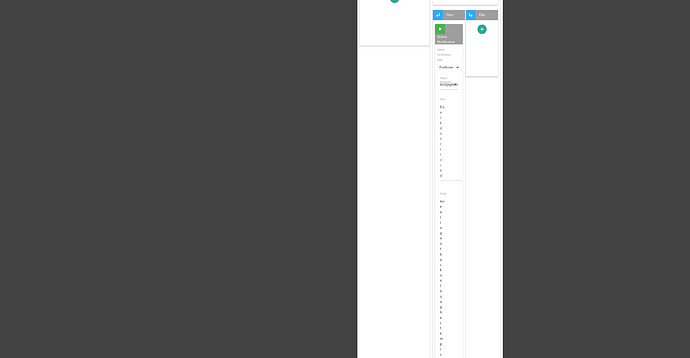 @Andy_Taylor the narrowed interface when having multiple nested IF conditions is definitely something that can be improved. But it shouldn’t be a common issue and it could indicate that the rule might be overly complicated. If you can post your entire rule, or email it to support@sharptools.io if you prefer, I’d be more than happy to help take a look if something can be optimized/streamlined.

P.s you can take the entire rule’s screenshot using the Rule Screenshot feature.

I experience the same issue using Chrome or mobile on rules with more than 3 tiers. Even the 3rd tier gets a little narrow on the Then section. I have multiple rules that are more than 2 tiers and it causes a lot of issues with editing. It has been this way since I started using Sharptools.
Example: rule raises fan speed on button push

I didnt’t think mine was that complex…however ive got a pushover towards the end, which doesnt look too bad when not editing, but as soon as you click edit…yea gets a bit tricky 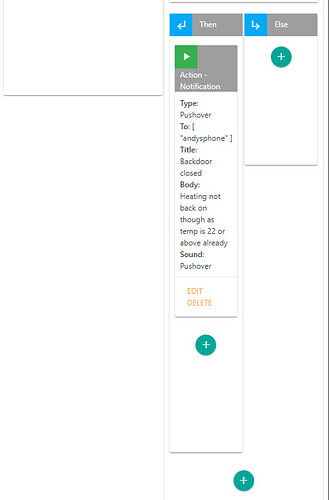 @Terri, your rule logic is straightforward and there is really no need to change it. But if you really want to reduce the tiers of the nested IFs, you may try something like this where I moved some of the nested IFs into series of IFs in the specific order. (This is based on the assumption that the switch is always on as long as the fanSpeed is not 0.)

@Andy_Taylor It seems the 2nd IF doesn’t need to be nested. It can be after the 1st IF condition and its actions. 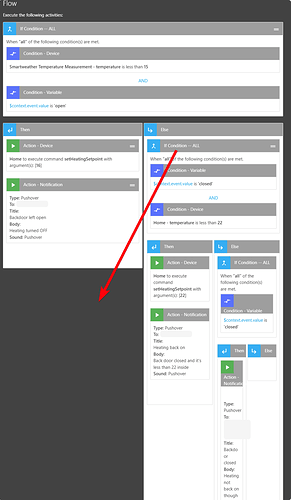 Yes I need to revisit this as it isn’t working quite right, the turning the heating off part works , but even if the door is opened for 1 sec and closed the else bit is running. So i need to only run the ELSE bit if the door has been open for >x secs. Moving it across looks like it should do that I think

My rule is working well so I don’t plan to change it. I was posting more as confirmation of the problem.

For the sake of learning…
I originally had seperate IF TEHN series for each speed and it created a loop.
How does moving some of the nested IFs into series of IFs differ and how does the specific order play into it?

How does moving some of the nested IFs into series of IFs differ and how does the specific order play into it? 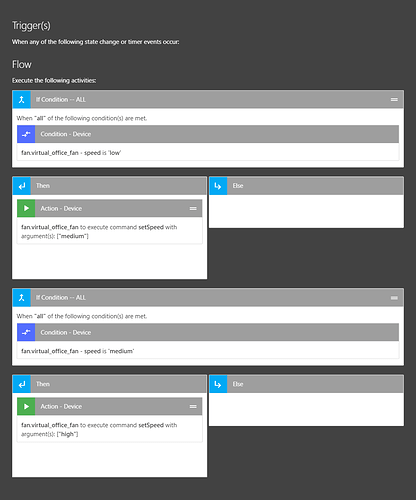 However, if you swap the IF conditions’ order, you can avoid the undesired chaining effect. (This is not necessary a loop though.)

Thank you! That makes since