Motion Detection rule will not fire

At first I thought it was something to do with the thermostat, which is what I’m trying to control. But I have simplified it just to the trigger and sending a notification (eMail\Text) and I never get either. Both Sharptools and Smartthings indicate there is motion so that is not the issue. 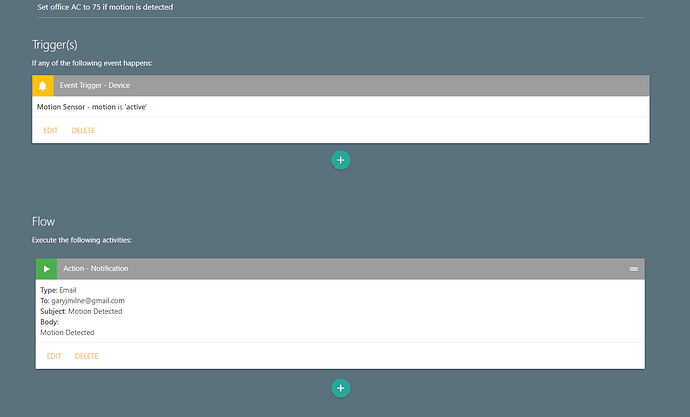 @Gary_Milne, sorry that the rule wasn’t triggered for you. I looked into the log again per our conversation in the support ticket, and I actually found a bug where the trigger caching mechanism doesn’t update the value in specific scenario, and I’ve created a bug item in the our list. Meanwhile, I manually refreshed this particular trigger’s cache, can you please try again if this rule is triggered when motion is detected now?

Yes James that worked. So that is a per trigger one off fix that you did right, because I noticed other ones that did not fire. But don’t worry about those, as long as I know the bug is on the list that is all I care about.

Yes, James manually reenabled that one particular rule on your account.

He found a bug that when a rule is disabled and then re-enabled, a cached value isn’t being updated as expected so the rule doesn’t actually get re-enabled for processing right away. (Over time, the cache will get cleared and the rule gets properly re-enabled).

He’s working on putting together a hotfix. Thanks again for the report and apologies for any inconvenience.

@Gary_Milne, I’ve deployed a hotfix to take care of this rule trigger cache bug. Thanks again for reporting and feel free to let me know if you have any questions.

Thanks James. I’m looking forward to having a log capability but adding SMS messages is an O.K. workaround for now. I may hit you up about another rule but let me do a little more testing first.