I’m using media tiles to make a security camera dashboard, viewed in Fully. I want to see if the media tiles can be set to use a different lower resolution stream for the thumbnail image than for the full-size expanded image.

I have 16 cameras that I’m transcoding to MJPEG, and even transcoding them down to 640x480 at 6fps, the browser lags horrendously and can’t keep all the stream thumbnails synchronous. I don’t think the issue is coming from the transcoding machine, which with all 16 streams active is only at about 25% network usage, 30% CPU usage, and 1GB of RAM used for transcoding.

Ideally, I would like to use my transcoding server to create a dual MJPEG stream for each camera - a thumbnail stream at 160x120 3fps or so and a full size higher resolution stream at 30fps. Normally, the media tiles would display the thumbnail stream, but when tapped to expand the tile, it would need to load the full size stream.

I’ve tested streaming all 16 cameras at 160x120 3fps and the dashboard works great at that res. Of course, when expanded, each camera feed looks terrible, but they are all synchronous and look fine with the tiles collapsed.

Is this thumbnail source vs full size source something that could be incorporated? 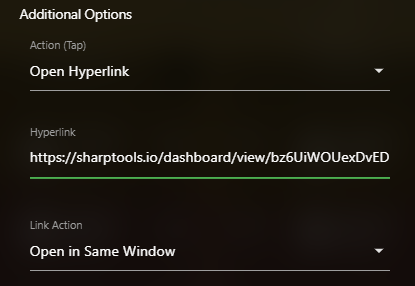 It’s a bit different than tapping to prompt the high res cam view as you mentioned, but works out pretty similar for me.

That’s a good stopgap solution, thanks. I’ll probably do the same. I do like how the media tile expands when tapped though.

I’ll probably do the same. I do like how the media tile expands when tapped though.

It doesn’t have quite the same smooth animation effect that comes default with a Media Tile (or transitioning dashboards), but it could be an alternative for you if you didn’t want to have to navigate to a new dashboard.

I did try the modal display actually, but it was not able to load the stream that way. It worked fine with linking to a separate dashboard, it just required a bunch of extra dashboards.