Summary: Valve tiles currently require you to tap a small ‘Open’ or ‘Close’ link in the bottom of the tile. It would be great if valve tiles acted more like the Switch tile and allowed you to tap anywhere on the tile to toggle the state.

My Dome water valve shutoff has been working for some time through Hubitat rules and dashboards and as a ST valve tile. Today it was totally unresponsive in ST but continued to work in Hubitat. I found that it will now only work as a switch tile in ST. The valve and Hero options are unresponsive. Has anyone else had a device change like that for no apparent reason?

I think everything is working OK as a switch but the oddity of this makes me wonder if there’s more (or less) to it.

The valve and Hero options are unresponsive. Has anyone else had a device change like that for no apparent reason?

Thanks for posting and sorry to hear that things aren’t working as expected.

Can you clarify what you mean by the tiles are unresponsive? The data shown on the Valve and Hero Attribute tiles aren’t updating as expected? And perhaps that the Valve tile can’t control the valve at the moment?

Valve and Hero tiles are not updating and will not control the valve at all. The valve was inexplicably turned off this morning.

I usually open ST in Edge but because that’s occasionly a problem I tried in Chrome also and found no difference.

Thanks for the confirmation. Which device driver is being used and what Hubitat hub firmware version are you on?

When you control the valve from your SharpTools Dashboard, do you see the small spinning circle in the bottom left corner of the tile? And does it show a green success message or red error message after sending the command?

Driver is “Dome Water Shut-off”, firmware is 2.1.6.118. I just set it back to valve and tried it. I’m getting the circle and green “Command Sent” notification on every attempt and now it’s worked a few times and then back to not working at all.
BTW I really appreciate your responses and help.

It is, however, updating in ST when operated in Hubitat.

Just to confirm, are you testing from a Desktop/Laptop with a mouse cursor?

The open/close commands on the Valve tile have pretty small touch targets at the moment, so it’s easy to tap the wrong command on a touch device. We have it on our hit list to change the valve tile to act more like a light switch tile where touching anywhere on the tile will send the command. 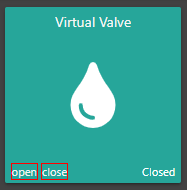 I am using a touch screen and I am aware of the small target but that still may have been the problem. At least for now, when I really focus on it, it seems to be working. Apologies if that was the whole thing. Thanks again for your help.

Thank you for reporting the issue! User feedback is a key part of how we prioritize what we work on, so I’ve added your feedback to the tracked request around being able to tap anywhere on the tile to toggle valve status!

Just one more thought. As someone who has had a flood from a burst pipe, I can tell you that that trying to stop the water in the middle of it produces a lot of adrenalin. Trying to hit the small target would be very difficult (especially since I apparently can’t hit it without the stress). Before anyone asks, it is automated but a backup is important. So one vote for moving the change up in priority. Thanks again Josh.

Sure thing - thanks for the example use case!

In the meantime, you can use the SharpTools Rule Engine to create a quick tile for closing the valve.

You can create a rule with just the action you want (no triggers): 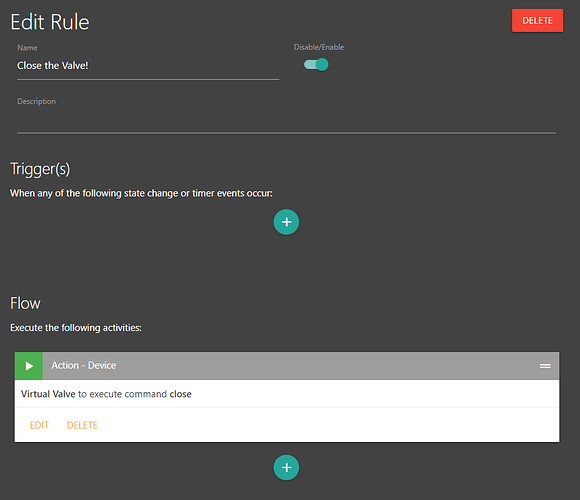 Then add that Rule to your dashboard:
(it won’t reflect the valve state, but it’s helpful if you want a bigger touch target or want to run a set of actions): 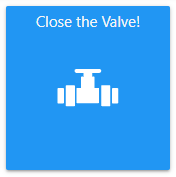