HSM status not changing in dashboard

My HSM status according Hubitat is: 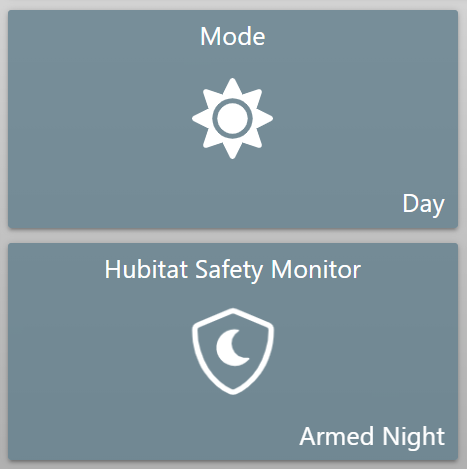 Also at the moment for example Webcore sees HSM as disarmed like it should be.

How to fix this and why this happens?

Can you clarify what you mean with this last point? Did you try changing the Location Mode or the changing the Hubitat Safety Monitor state?

I would think that toggling the HSM state directly should generate the expected events and send them over to SharpTools.

Hard to tell what the logs are filtered to here as it looks like it’s just app 2. It would be helpful to see the surrounding logs around the time of the event that seems to be missing (specifically for the SharpTools ‘app’).

By default, the ‘success’ type of logs from the SharpTools app are disabled but ‘error’ logs are always printed. If the event failed to send because of network issues or something similar, you should see an error in the logs around the same time the event was generated.

You can also manually enable logs in the SharpTools ‘app’ in your Hubitat hub if you wanted to see more verbose logging for troubleshooting (make sure to press Next / Done to save the changes):

These don’t trigger a refresh of the HSM state. The HSM state is one of the ‘default’ subscriptions that get setup so it’s primarily event driven.

That being said, if you do a refresh of a browser that is displaying the SharpTools.io app (

/ F5), the web app does a series of healthchecks when it first loads and one of those healthchecks is to refresh the location data*.

*That being said, changing the HSM state directly and making sure the events are being properly generated by the hub, sent to subscribed apps, and getting sent over is probably the first thing I would troubleshoot.

I changed hsm state and location mode manually, yes. Can someone else confirm are they seen same problem or is it just me.

We don’t have any other reports of this. I just tried and everything worked as expected for me.

As mentioned above, you may want to enable logging in the SharpTools app (in your Hubitat hub) as a troubleshooting tool. As you can see in the video above, when I changed the HSM Arming status from the HSM app within Hubitat, the logs in Hubitat showed:

From the bottom up, the ‘Disarmed’ log from the HSM app (451), then the SharpTools app (65) passing over the hsmSetArm event (eg. the request to arm) and then the hsmStatus → disarmed event… and following each of those, the confirmation that the event data was successfully sent across.

If you want to send a note to @support, I’d be happy to take a closer look with you.

This had to be something which was just concerning me. I armed system again and disarmed. Now it works. Sorry to bother you guys with this but I was 100% sure that this had nothing to do with my system or actions. I really thought that SharpTools had an issue but that is not the case.

Thanks once again @josh .