How to reference context variable with underscore

Is there a different syntax for using the expression editor to pull in json values that contain an underscore?

This happens on any of the fields that contain an underscore: ‘feels_like’, ‘dew_point’, etc. (pulling in from the OpenWeather API).

The word after the underscore gets truncated. 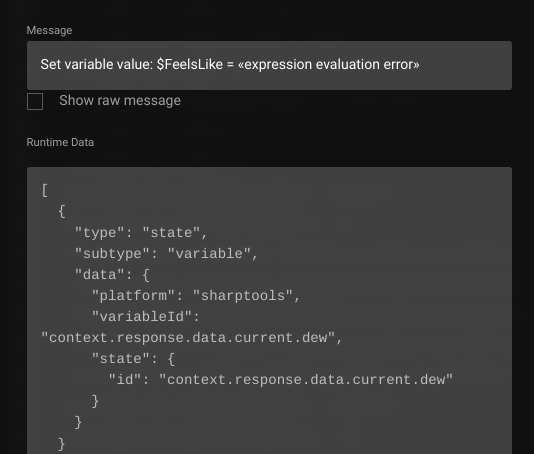 The word after the underscore gets truncated.

In the meantime, since you’re using a full expression, you could alias the parent property which doesn’t have an underscore and then reference the property under that:

Is there any way to use a variable to construct a context variable, as in

You can use the same concept of using an alias. Expressions themselves must execute synchronously in a sandboxed environment, so the variable references are actually swapped out before the expression evaluation runs and thus can’t be nested. But once things are running inside the expression, you can use variables in field accessors.

Ah, I was soooooooooo close.

We pushed an update today to handle properties with underscores in their name, so you should be able to use the property from the context variable directly if you prefer now.