How to Manage A Variable

I am looking for a way to put in a countdown Counter on displays .

I have created a variable CountDown=138

At 00:01 I want to reduce that by 1 so would normally do something like

How do I do this in Sharptools?

Hi @Michael_Horton, math functions are not currently supported yet, but please cast your vote to this existing feature request, so it helps to get prioritized.

Addition of variables is great! I know they are new, so this might be asking too much. I have two humidity sensors and I’d like to report the average of the two relative humidity values on my dashboard. I see where I can a variable equal to a sensors RH value. Is there anyway, for example, to set a variable equal to (RH1+RH2)/2, where RH1 and RH2 are the humidity values reported by the two sensors?

@James I have successfully sent a number to Sharptools from HE and it is received by Sharptools as a string so I can display it easier on a dashboard.

I have replicated it for sending Alert Messages to put on the Dashboard.

Unfortunately ONLY numbers are received in ST and displayed in Dashboard - the Number is showing as Text because I am displaying as Text to get bigger text on dashboard.

The AlertMessage variable is defined in HE as a String

I can see HE sending the variable to ST but can’t see ST receiving it.

Can you advise please?

So you will have to change the action from Send HTTP GET to Send HTTP POST, and include the variable in the body to avoid the encoding issue. See the screenshot for example below where I added %MyText% in the body section in JSON format. 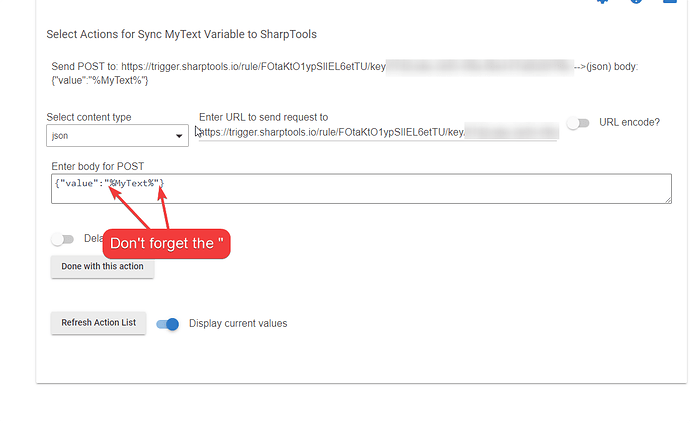 This should work for you.

Ok got around to trying this

From the HE Logs I can see 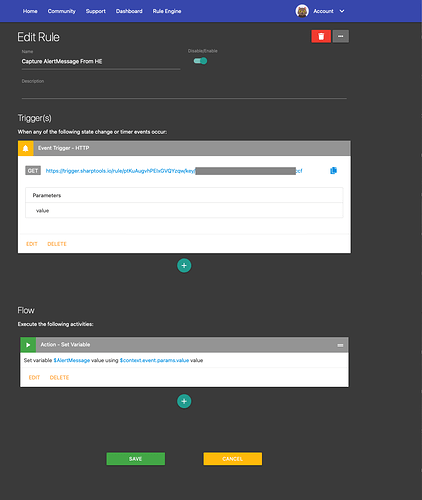 What am I messing up?
Thanks

You are a STAR!!! @josh and VERY MUCH APPRECIATED!!!

Would be VERY NICE indeed if this were a little less geeky to get going, a smidgeon?

I tried the HTTP GET action in Rule Machine to a test service (https://requestbin.com/) and it didn’t work when I had a variable in the URL. The rule logs acted like it was sending the request, but it never actually got sent.

Not sure if it’s a bug or what. Either way, the POST action worked.