This post draws inspiration from a user on the SmartThings community who wanted to know how they could trigger an action in their smart home 10 minutes before the next alarm clock on their Android phone.

They had found a Reddit post where a user had described the basic concepts of how to setup the Tasker profile, but couldn’t quite get it working.

The video below shows the step-by-step instructions needed to set this up. Further below are the written instructions which may be helpful as a reference.

Tasker can definitely be a bit overwhelming to learn at first!

A summary of the profile as noted on Reddit has been copied below for easier reference:

To consistently perform a Task, a certain number of minutes before the next scheduled device alarm is to go off, use two Profiles:

Then the Profile to Trigger your desired Task at the time before the Alarm is going to go off:

So, Tasker has the concept of Profiles, Tasks, and Actions:

The way time events and AutoAlarm work is a bit different than a normal Tasker profiles/tasks. You have to run one task periodically to trigger AutoAlarm and setup the variables for timing, then another task which is triggered based on the variable you set in the first task.

So from the profile above:

The BeforeAlarm variable is then used in your second Profile which is also a time based profile, but one that uses your BeforeAlarm time to determine exactly when it can be triggered. Once the profile is triggered, it triggers your main Task.

Prior to this users request, I hadn’t used AutoAlarm before, so I bought a copy and downloaded it. From what I can tell, it has a bunch of different local variables it sets when it’s triggered. At around 2:00 PM, I set an alarm for 2:05 PM and ran the test which shows that the following variables get set: 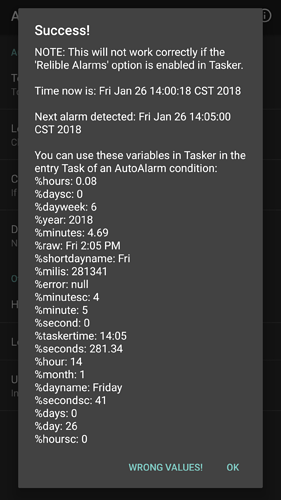 Of interest is the %seconds variable, since that’s what your profile uses. The %seconds variable is how many seconds into the future your next alarm is going to trigger. So in my case it was set to 281.34 seconds (or roughly 4.7 minutes away).

One thing I would note here is getting the variables exactly right is important. As you can see from the screenshot above, %second is very different than %seconds

Isn’t the variable %secondsc rather than %seconds (based on the screen shot)? A strange variable to use but maybe Tasker already uses %seconds.

If I remember correctly, %seconds is the total number of seconds until the next alarm whereas %secondsc is just the seconds portion of the time from the full time stamp. (Eg. It was 4 minutes and 41 seconds away so %secondsc = 41 whereas %seconds = 281)

We wanted to add the total number of seconds until the next alarm to the current time stamp (in seconds) so we could calculate when to trigger things, so we used %seconds.

Thanks, friend. This was a useful guide.

I have one token to add:

My profile would not trigger correctly because the variables for time had come out in scientific (E) notation (and also contained fractions of a second). The time profile trigger could not handle this as a unix timestamp and would not trigger.

You may need to surround your time math with the round() function:

Now that google supports routines from Android Clock, could you just do this with a silent alarm to trigger a routine to turn on a switch?

Been trying to get this to work and cannot…

Any input would be great
Thanks

If that doesn’t help, I’d suggest posting a description export of the Tasker profiles so we can help you review.

Edit: I’d also suggest making sure the relevant (de)optimizations have been made for Tasker:

Want to thank you for quick reply

At quick glance, it looks like everything is setup as expected. A couple of things you might check:

I just tried walking through the steps part by part and I see what @RJ_Marcus was referring to. It looks like the resulting %BeforeAlarm variable was being stored in scientific notation which didn’t work with the time profile. 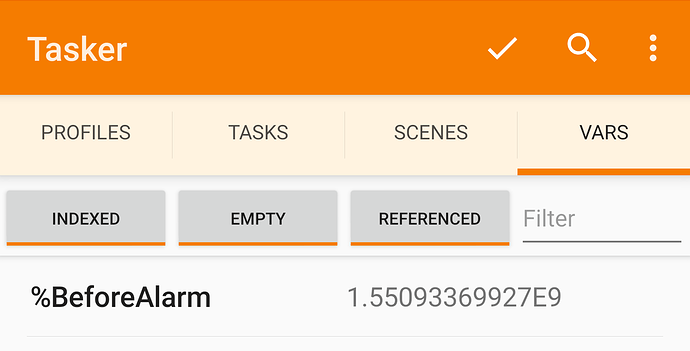 If you take his suggestion and wrap the variable formula in round() it keeps the time as a normal integer timestamp which works with the profile: 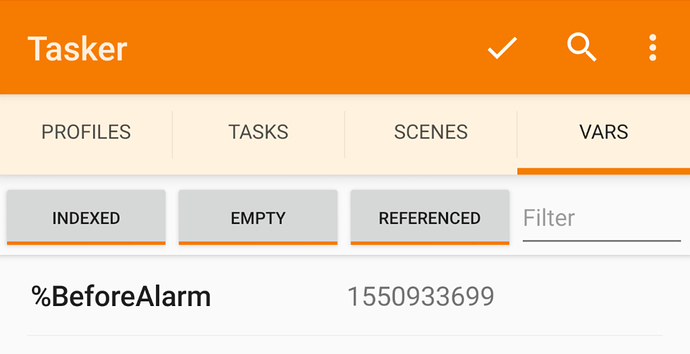 I’ll update the text in the original post above accordingly.