Tonight while trying to diagnose why my Wi-Fi at home has been sporadically unreliable, I happened to look in the Wi-Fi settings on my fire HD 8 tablet, and noticed that within less than a month it thinks it has used over 4 TB of data! Attached is a screenshot, however I’m wondering if it really is using this much data and if so why, or is it possible that this is being misrepresented somehow? I have three tablets, and in thinking about it now, mystified instability did start around the time I added the 3rd tablet. The other two aren’t quite this high, but even the lowest is >1Tb in less than a month! 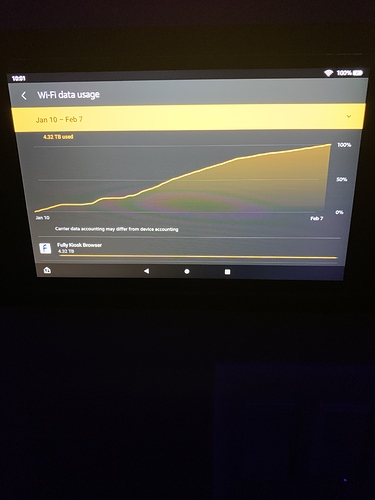 Do you stream video content to the dashboard(s) using the Media Tile?

Yes - I have two video feeds on the Home Screen for the largest data consumer (and another one that is still high, but not 4tb), but they are the alt stream (low bit rate), so would they account for that much data?