Help with rule execution based on a variable

I need help debugging this rule. 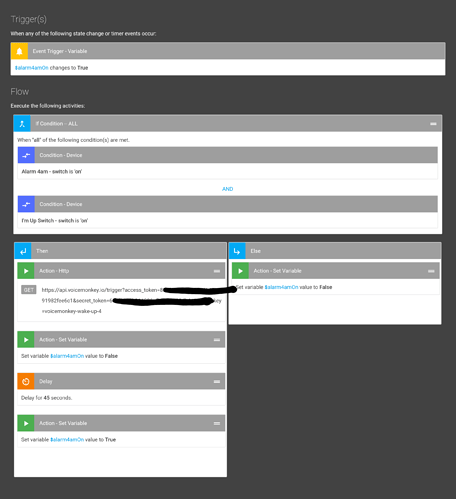 @Terri , what is the rule id of this rule? (You can find it from the URL when editing this rule.) I can look up in the log if there was any error. Meanwhile, you may want to add a couple email notifications before the IF condition and after the Voice Monkey action to help you troubleshoot.

I sent a dm with the url’s of both rules.

I am having a lot of issues with rules based on variable changes.

Thanks for info and I have replied my findings in the PM. I noticed both rules are some how complicated with the same variables used in multiple rules which may cause race condition or undesired interference if the logic is not designed carefully.

For the SMS notification, it can be something different. I have moved all my notifications from SMS to Pushover because I’ve found Pushover more useful, more reliable and just as fast, if not faster. Cell carriers’ SPAM detector tends to block SMS messages if the messages are alike and sent multiple times within a short period (how the SPAM policy works is a basically a black box.) and it is up to them to determine how long the message will remain blocked. Ex: if you send SMS messages - “security alert” a few times within a few minutes, it’s likely to be in the carrier’s black list for a unknown period.