I have a GE Enbrighten Z-Wave Plus Smart Light Dimmer (model 14295) with a Smart Things hub. When you turn the light on it takes a couple seconds turning on (from low dim to full light). I would like it to just turn on directly to the previously used dim setting and not fade on (or off). I understand that I can use Sharp Tools to do this because that is not a setting within my smart things app, but I am
having a hard time figuring out how to make a rule to do that. Can anyone help me out?

Ive been playing with this and I feel like whats happening is that the light is executing its turning on at a fade before the rule kicks in. So with the rule shown in the screenshot, the light is taking 2 seconds to fade on to the previously set dim level and then immediately jumps to 80 set in the rule. Anyone know how to make it such that that previous fade on doesnt happen? 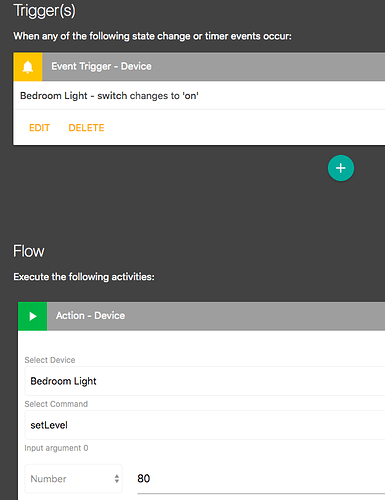 Hi @Laura_Farrell - welcome to the community and thanks for posting.

Are you looking to reconfigure the light so it always dims immediately even when physically controlled? Or looking to create a rule that could be triggered based on some other event (outside of the light turning on?)

Based on the edit, I’m assuming it’s the former in which case it depends on what configuration settings the device exposes. You’d probably have better luck asking in the SmartThings community where you might find a special device handler you could install to adjust the ‘ramp rate’ of the device.

If it’s the latter, you can usually use the setLevel() command with two arguments. The first argument is the level you want to dim to and the second is the duration you want to ramp over. Again, this varies from device to device with some not implementing the second parameter at all. Historically, GE device have offered this optional ramp duration parameter.