Good day to all,
I have an older 10.1 Tab 3 and I loaded Fully Kiosk and SHarptools on it and the response in sharptools is extremely slow. I will select a dashboard tile and wait for a count of 5 before it opens the new dashboard, the same occurs when i select a action tiles (light on, for example). The tablet has 16 Gigs of space and 2 Gigs of ram.
Has anyone experienced this before or have a solution?

Thanks in advance
Bob

Would you mind sharing a screenshot of what your dashboard looks like while in edit mode?

The most common culprit we’ve seen is having a large number of individual spacer tiles rather than fewer large spacer tiles - especially when used with a smaller base tile size. On modern devices, you might not even notice the difference at all, but on a 7+ year old device it certainly becomes a noticeable factor.

Edit: Here’s a few links to similar threads about slow performance on old devices. In both cases, a large number of small spacer tiles was a key contributing factor to the slow performance.

Thanks for the videos. I sent you a PM to see if you could send over the dashboards IDs and allow us to take a closer look to see if there are any other suggestions we can make.

Edit: also copying part of the PM into the main thread in case it helps anyone else who runs into a similar issue and finds this thread. I noticed that a smaller tile size was being used, so I’d like to take a look at the overall number of tiles on the main (Living Room?) dashboard. Specificall…

Thanks for sharing the video - that certainly is very slow and is not the expected result! If you try on a modern phone or tablet, your experience should be much, much better. – Is this the original iPad Mini you’re referring to? If so, it’s around 8 years old now, so it’s likely not going to be the most performant device and it will feel sluggish compared to a modern device, but the experience in your video is certainly worse than expected. That being said, there are some things you might tr… 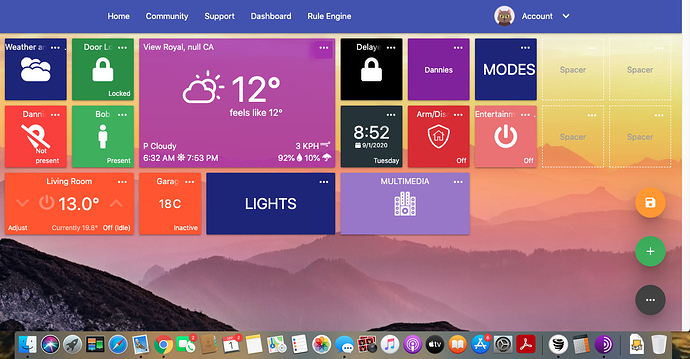 Thanks for the screenshot. I’m not seeing anything that screams out as a potential culprit on this particular screen. Are the devices on this screen slow to react when you control them?

I assume this is something of a ‘main’ dashboard that you navigate from? Would you mind sharing a screenshot of one of the other dashboards that is slow to navigate to?

yes the devices are slow to react and to go to lights, for example, takes 10 secs and to return takes 8 secs. the door lock takes an incredible long time to activate from that tablet.

I am wondering if it is the older andriod OS that is causing the issue? The last update was to put it to Kit Kat 4.4.2.

Things are snappy and fast when testing from your Mac, right? From a quick search, it looks like that tablet was released 7+ years ago, so it’s quite an old device (especially considering just how much tablets have changed in the past decade - including the Android OS).

Android 4.x definitely gets into the ‘old’ realm. It comes with an older browser (and webview) that aren’t particularly efficient and require shims to support some of the newer features. These older browsers are also generally inefficient at rendering modern web features like transparency, shadows, glows, etc. And worse yet, they’re inefficient at rendering JavaScript which is used heavily in modern web applications. (And that’s on top of the processor being old and slow compared to modern devices)

Out of curiosity, have you tried the dashboards on that tablet in Samsung Internet, Google Chrome, or Firefox?

Josh, first off, Thanks for the assistance, it is very much appreciated.
I tried it on Chrome on the tablet and while not as quick as my fire tablets it does react quicker than the fully kiosk version.
I would agree that it is the older android version that is probably slowing it down as well as the out of date webview app. So I would surmise that this older tablet, unrooted, is not recommended for running sharptools.

I have a slightly newer Acer Iconia that I was using and also finally gave in and got a Fire tablet to replace it. I got the Acer in 2017, it was probably released a couple years before that so, yeah, the internals and the software cannot keep up with the Fully code anymore. That and I had Tinycam running in it too so Android wasn’t happy and kept killing apps.

To add: If you have an older fire tablet and you have not traded in anything to Amazon, you might be able to get the %20 off new fire tablet plus whatever they pay towards the old fire tablet.

Josh, sorry missed a response to one of your questions.
Yes it is snappy on the Mac and on the Fire 8 tablet, a little bit slower on the fire 7 but that is an older one. I have a Ipad Air and it works well on there as well.