This project would probably be a piece-of-cake for most of you, but I’m so proud of it I sprained my arm patting myself on the back.

Last night I thought, “Why not list the open doors on the home screen?”. So that’s what I did. The video below shows the what it looks like. I first unlocked the Deck Door, then ran over to the Front Door and unlocked it. The display now lists both locks. Finally I unlocked the Side Door, and the display lists all three open doors.

You’ll notice that the alert button is turned off and back at the end of the routine in order to trigger another pass through the routine. It doesn’t look as jerky in real life as it seems in the video.

Update Mar 3;
i have recoded the rule and have eliminated all “flicker”. It runs as smooth as silk now.

That is awesome, I would be interested to see how you set this up/rules you are using to get it to display all unlocked doors.
I have been trying to do something similar with displaying which door sensors are open or what motion sensors are detecting motion.

@Stan_Silverman Could you share how you set this up. Like @Damien, I’m also wanting to set up something that works in a similar manner and what you’ve done could help me figure out a way.

My use case is that I want to set up a notification tile on my dash that will show the active notification, but critically can handle more than one notification by switching between them when more than one is active. I can get Hubitat to write a string to a variable “Washing complete” and display it but I can’t figure out a way of getting it to work with multiple alerts.

This was a lot easier to do than I thought it would be. Here’s an explanation of the rule that I think might help Damien, but maybe not John. Please let me know if it’s not clearly explained.

This is an updated video showing how smoothly it runs now. Takes me forever to walk from the deck door to the front door. Age…

When $AltertONOFF changes to True
/* Cycle through all the door locks to see if one of them is the cause.*/

/* Trigger the rule again if any door is still open */

Thanks Stan, that’s great. Although my use case is different, I think I can apply some of what you’ve done.

I will have separate rules for any events I want notifications for - put the bins out, Dishwasher Cycle Complete, Washer Cycle Complete, etc. Each of those individual rules will have a virtual switch that will be triggered on (and I’ll have a means of setting it back to off). I will then use another rule, triggered when any of the virtual switches is on, that cycles through each virtual switch and sets the variable. It’s that cycling through each with the 2 second delay that has helped me.

@Damien Depending on how many locks or doors you’re trying to monitor you could also do this with a Super Tile. I’ve had a couple of versions but have now settled on the below: 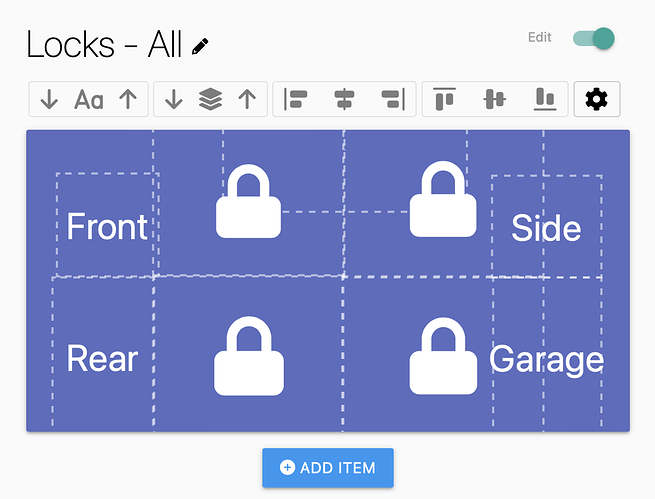 The padlock icons change to show the locked/unlocked status individually. With a Virtual Thermostat in Hubitat, I have a rule that fires if the lock status of any door changes. The actions then set the temperature of that thermostat to 0 when all doors are locked, 1 if the front door only is unlocked or 2 if any other door is unlocked. I use those temperature values to change the Super Tile colour as follows:

I like that approach for my locks as it keeps the content on my dash static. However I’ll definitely use the @Stan_Silverman method for my notifications.

@Stan_Silverman thank you for sharing, sounds like exactly what I am trying to achieve I will give your approach a go.

@John_Williamson I am currently using the Super Tile with a variable but have been only able to display one active motion or door sensor name at a time, and it only displays the last one that was active so if multiple doors are open I could only see the latest one.

Thank you both for the information it has been really helpful.

@Stan_Silverman I have set this up for my door sensors and it is working perfectly, thank you so much for sharing!
I have added it to a Super Tile so it can display an open or closed door icon as well.
Next is motion sensors.

Glad it worked out, Damien.

Now why didn’t I think of motion sensors? Next project!

My active motion sensors are now being shown. Nice!

Now thinking about displaying batteries with life below some value - maybe 70%. Would be triggered by any battery life value chagnging. What do you think about that?

So many options, I have just set up another super tile to scroll through which lights are currently turned on as well.

I was thinking about adding a list of batteries with low lives. Instead I decided to include the lock’s battery level beneath the lock’s name. The door locks are the important ones; don’t want them to run our of juice!

@Stan_Silverman can you share screenshots of your rules. I’m having a hard time getting this to work.

This is my rule for displaying active motion detectors. Please let me know if it’s not self-explanatory.

Does this cycle once or continuously? If continuous, what in the rule causes it to cycle?

That was my problem. I first was setting the variable to false then true. But just the act of setting it to true even if it’s true will cause the rule to run again.

@just_jake thanks. I didn’t realize it would retigger without actually changing state.