I have a couple of dimmer tiles that only turn on @ 100%, while others turn on at the last setting. How can I set a default dimmer level for these tiles?

Am I the only one who has this issue?

The different behavior is based on the manufacturer or integration’s implementations. When you turn the light off, does it automatically set the level to 0%? If not, you might use Variables to store the level value when the switch is turned off, and then create a rule to send the setLevel command with the variable as the argument, then add rule to dashboard, so you can tap it to dim the light to the previous state. (Assuming the setLevel will turn the light on but it’s based on the manufacturer’s implementation again.)

Ah ok, so its manufacturer based. Can I set up two rules for one tile? One for on and one for off? Or would I need to make two tiles?

Can I set up two rules for one tile?

You may be interested to check out the Super Tile which allows you to add items (devices, variables and icons) and configure their tap actions in one tile.

We’re excited to announce the release of Super Tiles which enable you to build custom layouts for your devices and variables in a drag-and-drop editor! [Super Tiles] Super Tiles are a Premium only feature and can be accessed during your Premium trial period. If you are using the free tier, please send an email to support@sharptools.io if you’d like us to reset your trial so you can give Super Tiles a try. Super Tiles enable you to mix data from multiple things, variables, or both in a sin…

Ah yes, great use case. Thanks!

I would add that you could use a single rule to conditionally send either on or off.

It’s just a balance of what you want. Setting up a toggle action in a Super Tile is pretty straightforward as we have a macro there, but you have to recreate the other parts of the tile. Compared to setting up a rule and having to use the special $.runRule() hyperlink syntax on a normal switch tile.

I would also add that some devices allow you to configure whether they turn on to 100% or to last brightness. That’s going to strongly depend on the device though and if they provide that configuration or not.

I wasn’t having luck with the variable, but I set up a rule and added it’s own tile to my dashboard - next to the tile for the related light. So basically, it’s a shortcut tile to turn the light on at a specific dim level. I’ll play around with the variable more, and the toggle action in a Super Tile. 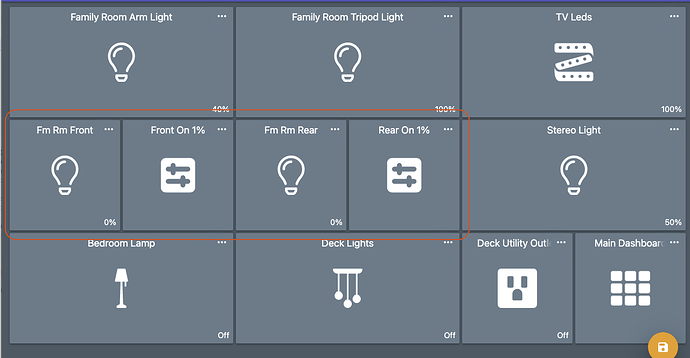 and the toggle action in a Super Tile.

Now that I think about it, the toggle action wouldn’t help you here. It’s still sending the on() and off() commands. Still, a single rule that ‘toggles’ between your desired states still might work. 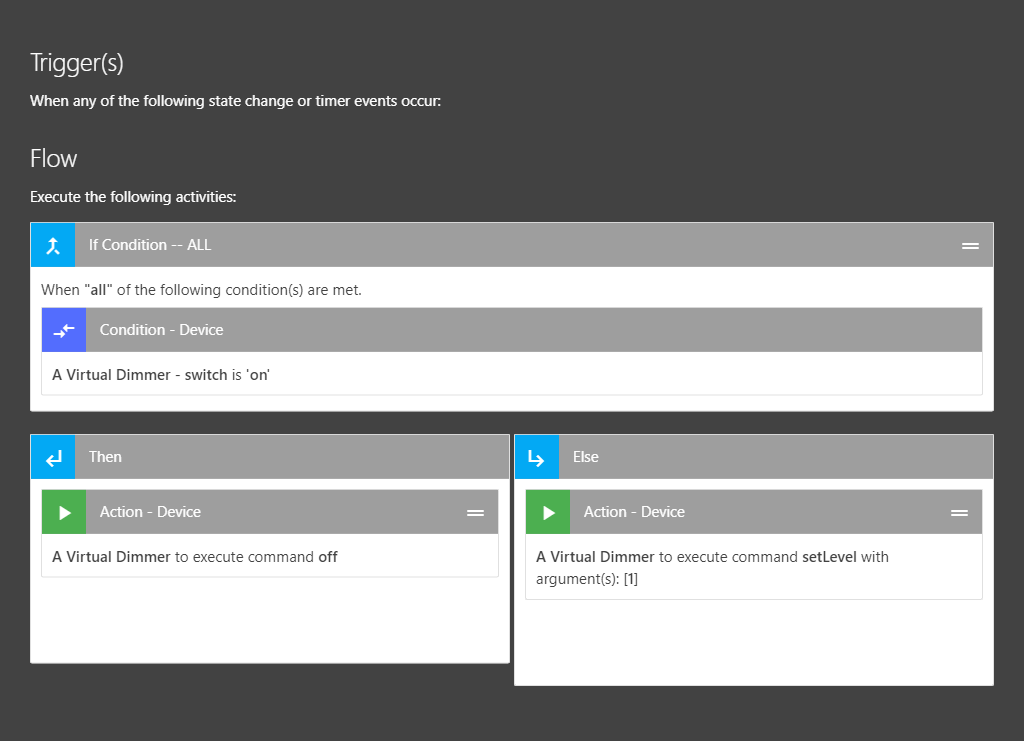 I’m assuming your “Front On 1%” rule just calls a setLevel(1) type of command, but you could adapt the Else side of the rule accordingly.

You run a rule from a regular Thing tile by changing the action to Hyperlink and using the $.runRule(RULEID) syntax or you can select a rule directly in Super Tiles.