Device capability as an input argument?

Just recently switched to SharpTools due to death of WebCORE on Smartthings hub, and still learning

… still testing with the free version so my aim for the moment is try to avoid using variables.

The issue that I have is that it seems like input argument can be either fixed number or a variable, not the device/capability. And this seems to be a case for both conditions and actions. Is there any way to do this, without using variables?

Here is a simple example:

Now I didn’t really expect I will be able to achieve this 2nd example without variables (since you don’t directly compare it, but you compare to some calculated value) but I’m kinda surprised you can’t compare 2 devices capabilities without creating a variable for one. This only complicates stuff. 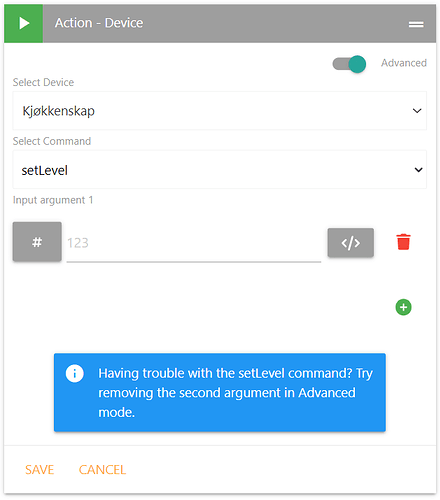 The first one would require a variable to snapshot the level of the device attribute on the right side of the comparison. While it’s been mentioned a couple times in the community, I don’t think anyone has created a formal feature request for it.

The second one would require expressions / variables which are part of the premium tier.

Right, I knew the 2nd one with expression is a no-go with a free version.
Well then I could request right side as an attribute, but not just for comparation, but for action as well. Why not copy the value of one attribute to another … or between devices, directly, without the need for a middleman (variable) ?

Seems reasonable to me! We’re always open to feature requests – it helps us better understand what’s most important to the community as we can track what people vote for and adjust our priorities accordingly.