Question for ya’. In iOS 15, it appears that the banner at the top of any dashboard remains visible in SharpTools Blue even when running in full screen mode.

Is there a way to eliminate this, or have it styled in black so it “disappears” into the iPhone notch?

I did some quick testing with this and it seems like there’s not a quick solution.

From my testing, iOS 15 seemed a bit finicky – Apple has a custom property for setting the status bar color, but iOS 15 doesn’t respect the values that are officially published by Apple (though it does work with some undocumented values). And unfortunately, iOS 15 only respects those values if we don’t set the standard ‘theme’ color which is a broader industry standard respected by a much wider set of browsers… which means trying to get a black status bar with just iOS 15 seems to impact pretty much every other browser in a negative way.

I’ve converted this topic into a feature request so other people can vote to express interest.

Edit: Not sure if you’ve tried one of the apps like Kiosker, Kiosk Pro, or tKiosk but I would be curious what the status bar looks like on those with iOS 15: How to switch from Android/Fire to Apple / iOS / iPad Pro? - #2 by josh

Thanks for the info - I suspected that was going to be the case (very Apple-like, these days!), but figured it was worth a shot. I haven’t tried a 3rd-party kiosk solution yet, but I’ll give it a whirl and let you know what the outcome is.

Tried Kiosk Pro, and the status bar by default rendered as black, which looks great — however the authentication token isn’t maintained, so the session is logged-out of Sharptools each time the app is minimized or closed.

Thanks for the update! Have you tried reaching out to the Kiosk Pro team to see if there’s an option to maintain cache / browser storage even when the app is closed?

Many “kiosk” type apps target two different markets, so sometimes there are settings that can be adjusted to meet both. One market is more like your traditional kiosk at a museum or airport where after a user finished their session (eg. walks away and it times out or presses a ‘Finish’ type of button), things get completely cleared out and reset. The other is more like we are using for dashboards, where we want all the session data to be maintained (eg. wall mounted dashboards, digital menus, etc).

From a quick glance at their help site, it looks like they have various settings around “Memory and Privacy” as they call it.

For example, it looks like the Clear Data on Relaunch or Remote Update setting is turned ON by default, so you would want to turn that off if you haven’t already.

Supported in: Clear the app’s cache, cookies, session storage and local storage when the app is launched, or when a remote update occurs. Default Value: On Whil

Merging in another thread

With a new IOS update, the Kiosk mode UI is picking up a blue color of the website top nav as a barTintColor, is there any way to remove that blue color bar or completely remove status bar on iPad 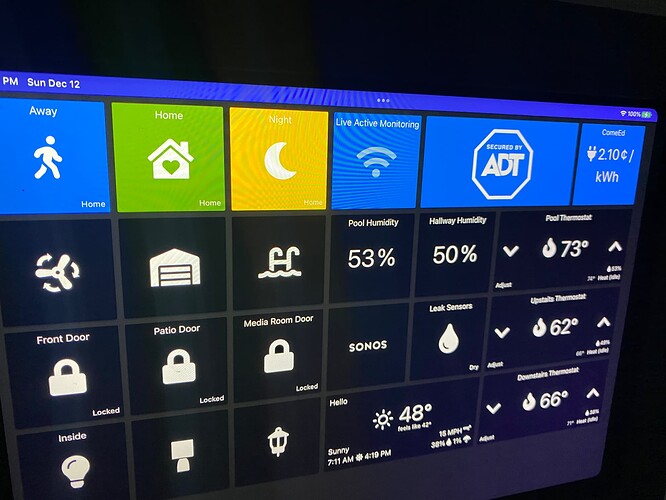 Hi @G-P - I’ve merged your post in with an existing feature request. Please see the replies above.