Not sure if anyone can advise as. I have two tablets set up with my dashboard running fullykiosk browser and they both work fine and display everything as I set up (pic 1) I decided to place another tablet in another location so decided to use and old huawei tablet i had lying around. But for some reason the colours don’t display the same (pic 2). I don’t really understand how if it’s just loading a web page up?? I can’t see any setting on FK or the tablet itself - any ideas ? 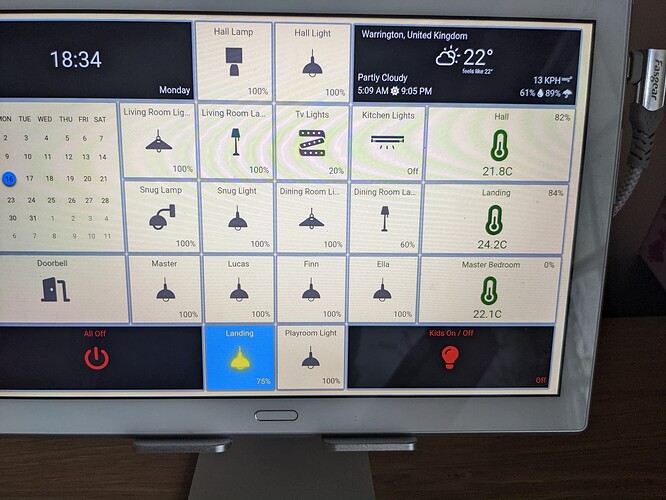 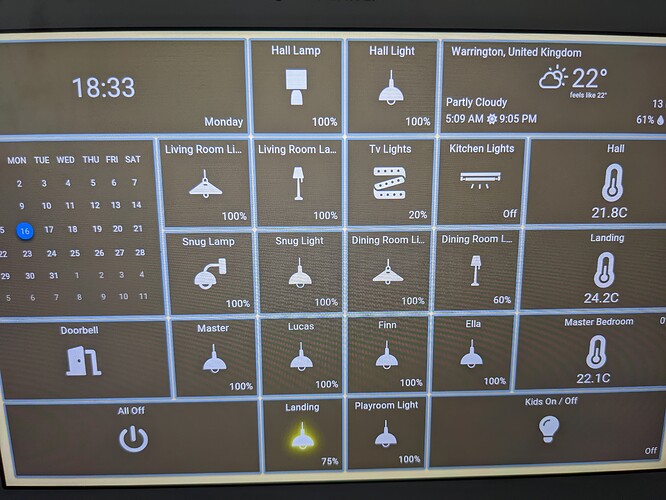 Thanks for sharing - it almost looks like that tablet has partially loaded the CSS.

Can you share more details about the Huawei device?

I can’t see any setting on FK or the tablet itself - any ideas ?

Does this mean you’re using Fully Kiosk on the Huawei device as well? If so, it depends on whatever ‘WebView’ implementation is installed on the tablet itself. You can find this under Fully Kiosk Settings > Advanced Web Settings > Select Webview Implementation (bottom of the list).

I would be curious what that is set to and what version the underlying webview is.

the tablet was an old demo tablet i picked when i worked in retail years ago. they came loaded with supplier content but as staff we had a chance to buy them cheap.

i was never fully able to remove the huawei liszt demo as it seemed built in an un removable even with rooting - it does say update the web view (currently shows 39) which i went into the play store and did - but doesnt seem to have made any diff.

i can always buy another tablet lol…

You can find this under Fully Kiosk Settings > Advanced Web Settings > Select Webview Implementation (bottom of the list).

Interestingly I dont have see this option…

What version of Fully Kiosk is it?

That seems to be a new version, but maybe the webview menu item in FKB depends on the OS version too.

Any chance you could load a recent browser onto the device to test with directly? I would be curious if a new version of Chrome or Firefox or similar had the same rendering issues as Fully Kiosk and the old webview version it seems to be using.

so installing chrome works and it displays properly.

Any ideas how i can get it to load using chrome?

Once you’ve enabled the Developer Settings, I would be curious what options show under WebView Implementation for that.

I vaguely recall that you used to be able to switch between the System WebView and Chrome WebView / Firefox WebView, but I don’t recall which moons have to be aligned to do that.

Edit: I think it’s Android 6-9 that can use the Chrome Beta webview, then Android 10+ can use the WebView beta/canary from the Play Store. I suspect the device is running Android 5.1 based on the reported version 39 for the webview, so you might be out of luck there.

Alternatively, you might consider using Chrome directly on that particular device. You can use ‘Add to Homescreen’ to add an icon to your homescreen that opens SharpTools.io fullscreen. You could still use Fully Kiosk in the background for screensaver and motion detection features.

ill have a play around

I suspect the device is too old. I was just adding the following edit to the post as you replied.

Edit: I think it’s Android 6-9 that can use the Chrome Beta webview, then Android 10+ can use the WebView beta/canary from the Play Store. I suspect the device is running Android 5.1 based on the reported version 39 for the webview

Running the dashboard directly in Chrome or Firefox (with Fully Kiosk optionally running in the background for Motion Detection and other features) might be your next best alternative if you can’t update the WebView or Android version on the device.

I had this same issue on a tablet. I “fixed” by choosing a slightly different shade of the same color.

A post was split to a new topic: Change Colors of Individual Tiles