Can I put a twitter feed into the paid version of

There is a account that provide local travel info, is there any way I can take their feed and create a tile with it?

There are a few ways… Depends on your setup, though. What HA system do you use? Hubitat? ST?

Afaik, there’s not a way to do it directly in SharpTools, but there are definitely ways to get it on there. node-RED comes to mind for sure… But let’s talk about your system and exactly what you want to accomplish, and we can come up with some ideas!

Im running ST, but do also have a SBC running armbian/docker in the house aswell. (Ive got a few rpi’s kicking about aswell)

Im building a smart display in the kitchen which shows calendars, some local travel webcams, along with various ST states all of which is working ok, and in an ideal world id like to place the map and twitter feed of this website on the panel as seperate buttons

I would definitely look into node-red for this. I believe it’s built into the latest Raspbian, so one of your RasPis should work great, or you can be up and running in a docker in literally 5 minutes or less.

Looking at that lage you showed, though, I think you’d maybe be better suited using a news tile. There are sites that allow you to create an RSS feed from a Twitter feed of a particular user like this, and you would simply create that news feed and add it in SharpTools. That would get you a feed much like the one embedded on that page.

Otherwise…
The Twitter node built in should be able to read the tweets of any particular account and do whatever you want with them. I don’t know exactly how to go about it in ST, as I switched to Hubitat a while back, but you could, for instance, speaking in general terms, as I’m away from my home system right now, use the Twitter node to read that account’s tweets and pass the tweet payload text to an attribute of a virtual device in your hub. --And add that device to Hubitat, showing that attribute on a hero tile. This COULD prove to be a more flexible way of doing things, like triggering automations, chimes, etc., when things happen in that twitter feed…but it would be hard to get the polish of the news feed this way.

Also: As for that map: Again, node-RED can handle things like this. You could set up a node to screenshot that page (or just one element of the page–but look into the documentation of the node you’re trying to use to figure out how to do this), save it somewhere, and you could create that as a media file with auto-refresh in SharpTools and use it wherever/however.

People do this often for weather updates, but they usually use a site that will create a png for them. In this case, if you’re married to this particular site’s maps, which are live, not image-based (in which case you could just put the URL in and have it auto-refresh), you might have to do a little extra work. Sounds like a fun project!

How To: Map tile with real-time traffic SharpTools.io (web)

It is really cool to show the map tile with real-time traffic on the dashboard. This is something I wanted to have for a while. And I was able to get this setup in 2 minutes following the steps below. [ApplicationFrameHost_2018-03-08_12-57-04] Steps: Get a MS Bing map API from here https://www.bingmapsportal.com/Application (Why not Google Map? Because Google map static image api doesn’t allow traffic layer.

Yes. Very cool. So this is much like the way people get their weather tiles generated. Like I said, if you’re married to the tiles on that particular page, it might be extra work, but if you can get this to work in your area/be happy with the look of these, this is great! Combine that with the RSS feed, and you should be good to go with no server needed! (unless you like the chimes idea).

Also: As for that map: Again, node-RED can handle things like this. You could set up a node to screenshot that page …

I wasn’t aware of this approach, and this certainly sounds cool. This can be an option for people who live in the area where Bing doesn’t provide live traffic data, so they can use node-RED to capture it from other sites, or for people who simply prefer the layout/look in another site. Thanks for sharing.

Looking at that lage you showed, though, I think you’d maybe be better suited using a news tile. There are sites that allow you to create an RSS feed from a Twitter feed of a particular user like this, and you would simply create that news feed and add it in SharpTools. That would get you a feed much like the one embedded on that page.

That’s the approach I was going to suggest. 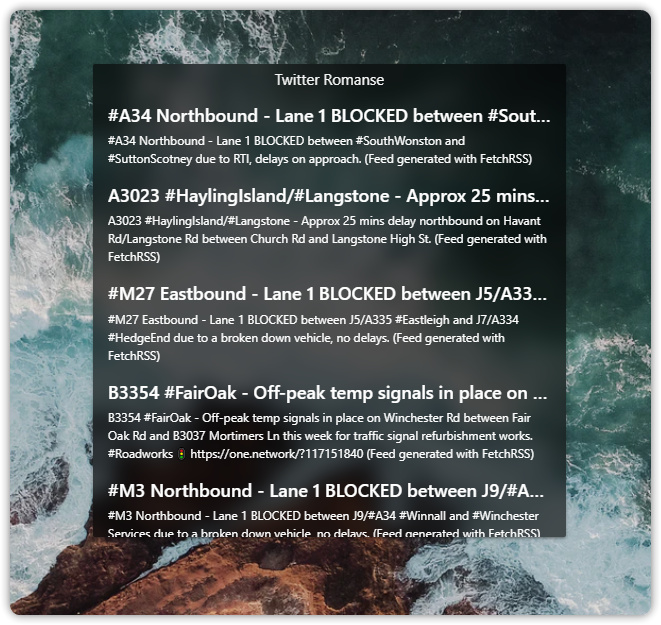 A quick Google search led to FetchRSS which is what I used for the above test - though there seem to be a number of other options out there too.

I grabbed the URL to the @ROMANSE twitter feed, slapped that in FetchRSS (and registered an account), then grabbed the ATOM URL. I then created a News Feed in SharpTools under Manage Resources and used the ATOM URL from the previous step. 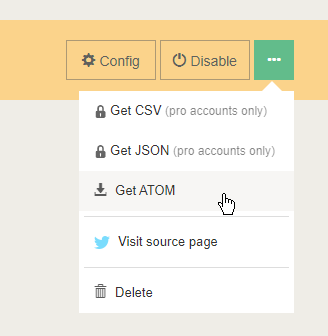 loads of great suggestions thank you. I shall go and tinker.

So I was looking into this same exact issue about 2 months ago. What I ended up doing was creating a free site (from sites.google.com). They let you embed maps as well as twitter feeds (any site in fact will let you do that). I happen to have the local traffic twitter feed.
Then with the magic of Fully browser, I bring this site to the front of the dashboard at a certain time in the morning, or when I sense motion in the morning in the living room. Here is a screenshot: 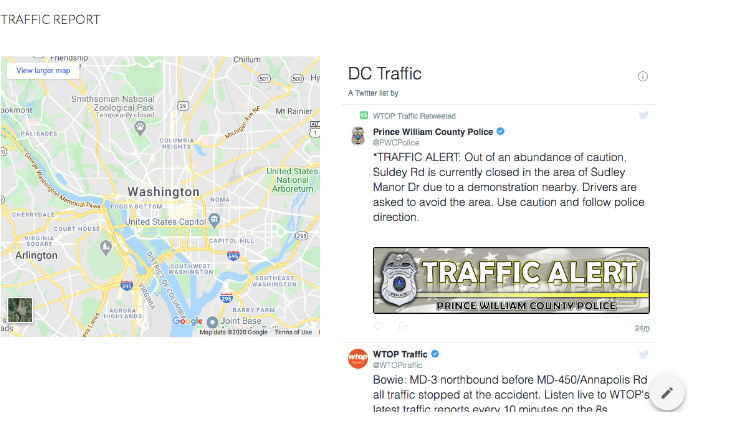